If it hasn't been reformed in the last fortnight, time for a change!

The overture seemed promising enough: in future, quality is to count for more than quantity, no longer will "they" be measuring how many people are involved in a project, but instead "they" will be feeling its shape, weighing its heft, judging its gravitas. Something like that, for now they are setting themselves to judge what is and what is not the genuine article. They are setting themselves to judge quality - and this from a government until now wedded to the notion that only those aspects which can be measured, put into tickable boxes or classified "right" or "wrong", have any true value, so forget the unquantifiable - and that not just in the arts, but, for example, in education, health, law and order also. Still, give them credit: the tunes coming out of the orchestra pit were delectable. Alas, the moment the curtain went back and the singers appeared on stage, the moment we could hear the words, the doubts crept in: in future arts funding will be going to those projects by which people might find "their meanings shaken up" or find themselves thinking "about the world in a different way." (The McMaster's criteria.) Mmmm. Would that be the same, I wondered, as Eliot's "blood shaking the heart"? Well, probably not; the meaning of such a phrase often lies, I have found, in the small matter of who said it. In this instance, James Purnell, minister for the arts is the speaker, so I would worry about who, exactly, is going to be the judge of whether the plays being staged at The Little Billingham Arts Centre are such that the good folk who frequent it are likely "to have their meanings shaken up and think about the world in a different way." I would also worry about The Arts Centre at Great Puffington where there hasn't been an avant-garde play in living memory, nor a concert of experimental music. Does that automatically mean that the offerings there are second rate? I am all for encouraging experiment and development in the arts, but I say again, who is to judge? Not politicians, I hope, for their C.Vs are loaded with evidence of philistinism. Nor QUANGOs, please! Is it just a coincidence that a reformist government wants to encourage reform in the arts, wants to shake people up? Could it not be the case that a very traditional piece might have qualities worth encouraging? Could it be that there are those abroad who would like to hijack the arts for their own political agendas? Or is that me being paranoid? 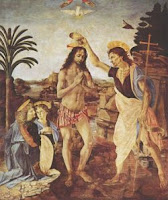 and The Baptism of Christ : Verrocchio and Leonardo da Vinci

To get an idea of the scale of the task they are setting themselves,
imagine that Verrocchio and Leonardo on the one hand, and Picasso on the other, are seeking funding. To decide, on the basis of these two paintings, which is the most deserving option, work out which painting most does it for you - i.e. shakes up the meanings! There you have it! Q.E.D.
Posted by Dave King at 11:59

Being a gentleman of a certain age you will remember Opportunity Knocks. I'll leave it up to you whether you remember it with fondness or not but the problem there was the fact that you could have a singer, a comedian, a ventriloquist, a dance troupe and Tony Holland who flexes his muscles to the tune Wheels all on the same show. Assuming all are of the same quality who gets the most votes on the infamous clapometer? Obviously the guy in his trunks who flexes his muscles to the tune Wheels. And why not? He was good at what he did, he entertained the crowds and probably did a lot to bring the Cha Cha back into fashion.

New Faces had a better system, they judged on content, presentation and star quality and many of those who scored high on the first two scored miserably on the "star quality" usually because they were speciality acts like Tony Holland who were only ever going to appeal to a minority audience or for a limited time. Their expertise and skill were never the issue.

I very much doubt if quality will ever be the sole criterion on which any project is judged. I'm not sure it should be. The BBC tried that with the Third Programme. Yes, let's ram quality down the nation's throat; it's good for 'em.

Sure it's good for 'em, Jim. I'm all for throwing quality at 'em, but just a touch worried about who it is choosing the "quality" they're going to get!