This one really belongs in the last post - got delayed in the traffic. 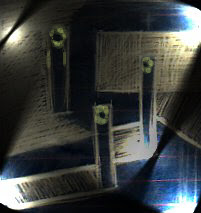 The Souls Pass On

Time, I think, for another Digital Doodle... 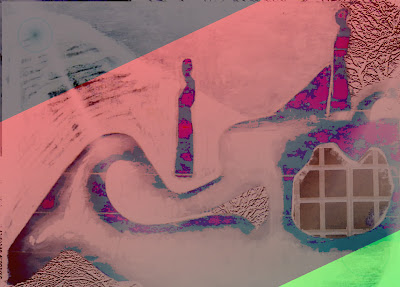 The Souls Pass On : from darkness into light pollution.

Doris Lessing won the 2007 Nobel Prize for Literature. I thought I'd mention it, as few others seem to have done so. Or do I do the multi-hued ranks of critic and commentator an injustice? There were the initial announcements, comment on the web, and then - well, very little really. Unless I missed it. I could not have missed the pages of comment on Anne Enright's "stunning" (i.e. unexpected) success in the Man Booker Prize, well deserved, I don't doubt, though I have not yet read the book. It could just be that Doris Lessing is that sort of author (I will come to what I mean by that later), but when you consider that the Man Booker is awarded for one book and the Nobel for a lifetime's work, the contrast of mixed opinion on one hand, and an overwhelming wave of silence on the other, seems all the greater.

If it sounds as though I am comparing either author unfavourably with the other, it is not so. Doris Lessing would approve, I think, the remarks of Sir Howard Davies, chairman of the Man Booker Committee, announcing the award, for she it was who famously submitted the first of her Jane Somer novels to her own publisher, but anonymously, then, when, as she obviously knew it would be, it was rejected, she used the fact of that rejection to draw attention to the way the cards are stacked against the unknown author. That alone makes her one of my heroes/heroines. So we might suppose that she would indeed have approved the chairman's criticisms: that too many publishers laud every word of their established authors while ignoring newer talents; that critics shy away from their responsibilities, giving those whom they have decided beforehand are up-and-coming, or even great, their most reverential treatment; and that you can detect when such a reviewer doesn't like the book only when he uses all his column inches to outline the plot. (My own pet hate is when the reviewer devotes pretty much the whole of the article to an author's previous books.)

But why, I wonder do they shy away from committing their true feelings to print (or, as in the case of competition judges, from making a stand)? Do they fear a loss of reputation if time proves them wrong? But worse yet: perhaps they are doing just that, perhaps they are expressing their true feelings, are not able to see the merits in a newcomer's work or the faults in that of an idol. (I am tempted to, but will not, suggest that on occasions they may not even have read the outsider's work.) To praise a book or manuscript when it comes from the pen of one whom all know to be great, may be a safer bet, but it is singularly unhelpful - and may help to explain why 60% of British authors earn less then £10,000 a year.

I promised to elaborate on Doris Lessing being "that sort of author". It was not meant in a derogatory way, but she does strike me as being an author for whom a critic might hesitate to lay his reputation on the line. The Nobel judges praised her "skepticism, fire and visionary power" and spoke of her "vision of global catastrophe forcing mankind to return to a more primitive life", but she has been criticised for being too strident and eccentric, and indeed her appearance on our T.V. sets when told of her award seemed a little eccentric. The judges hadn't been able to contact her before announcing the award because at the critical time she had "popped down to the shops" and generally seemed not to be taking the matter seriously, chuckling with great (and, I think, unaffected) glee and cooing that "I've won them all now!" A healthy enough reaction, you might think. Eccentric some might argue. Too unsophisticated, not to say child-like? To me she seemed the quintessential English eccentric - and none the worse for that -, but could that be why the critics and others have left her alone for so long. Besides, she doesn't help herself: she has written books of sci-fi!

Maybe posterity will give her novels, short stories and poems the sort of critical success that her feminist classic, 'Golden Notebook', achieved. It was a long while ago, but received the plaudits of many, including Joyce Carol Oates.

The Nobel Prize for Literature Committee has done it before, of course. They seem adept at wrong-footing our most seasoned critics and publishers. I just wonder if the inscrutable silence following the announcement might indicate that they are hurriedly reading as much Lessing as possible before deciding on their response. Maybe her day is about to dawn.
Posted by Dave King at 11:18 No comments:

Caitlin Moran writing in the Times a week or so ago, set me idly thinking along a track along which I often idly think. Showing a touch of envy towards those - these days everyone except her, it seems - who has a £1 million 3-year research project to study, well, anything you can think of, it seems, she came to focus on a £1 million 3-year research project to study soundscapes. Town soundscapes. The results were taken to suggest that we who live in these comfortable, human enclaves called towns, away from the brutish life with which we would otherwise have to share our existence, actually like the sounds that designers try so hard to filter out for us. Apparently we like the sound of skateboards and the swish of tyres on tarmac. We certainly prefer them to the noise of animals trying to kill each other or having violent sex. In future, architects and designers, it was proposed, should try to manage these sounds on our behalf. Filter them, yes, but not filter them out.

So what was the track along which my thoughts were again sent idly roaming? Well, I have often wondered whether and to what extent the soundscape in which we are brought up influences, for example, our musical preferences. Moran's musings extended my familiar thought-track into the realm of poetry. Those sounds with which we are most familiar and have therefore come to love, hate or apathetically filter out, do they help to determine whether we like or hate Schoenberg's Piano Concerto or prefer the classical scale? Or heavy metal? Would the day-in, day-out and nightly sounds of beasts clashing and mating predispose us to the music of Schoenberg, with its lack of the usual hierarchy of pitches focused on a single, central tone - with its lack, in other words, of any unifying foundation? Or would the reverse be the case? What about a £1 million pound 3-year research project to discover if there is any significant difference to be found when comparing the musical tastes of town and country folk?

Interestingly (how relevant?), there is something called ambient music. Here is a quote by Eno: "Ambient Music must be able to accommodate many levels of listening attention without enforcing one in particular; it must be as ignorable as it is interesting." He had just come out of hospital and was bedridden. He was given a CD, which with great difficulty he put on his music system, only to discover that one speaker was producing no sound and the other was set very low. He was too incapacitated to correct it, but listened to it anyway. It suggested another way of listening to music - as ambient sound.

Patience! I am getting round to poetry. Coming up now, in fact. The interesting/ignorable hypothesis interests me, but attempt to apply it to poetry and there is a difficulty: the fact that poetry is not just sounds, but speech sounds, which it could be argued, vary significantly as between town and country and so contaminate the discussion. They vary geographically, of course, though to what extent the divide is a town/country divide, would probably be difficult to establish. Either way, how do I exclude the influence of speech sounds from the results of my £1 million 3-year study? Would rhythm perhaps be a way forward? Would our ears be tuned differently by a rural ambiance as opposed to an urban one? Would either rather than the other favour an appreciation of Gerard Manley Hopkins's sprung rhythms, for example? Perhaps there is room for another £1 million pound 3-year study - on whether there is a geographical (say north/south) poetry divide.

Here is a quote I found interesting (from Adam Matta, beatboxer), back with music, but very close to (some would say incorporating) poetry:"I am definitely trying to integrate the urban and percussive elements of hiphop and beatboxing with some of that abstract sensibility, as much as I enjoy painting the urban landscape. It’s the rhythms of the city that have interested me since I was two years old, but, for instance, when you watch traffic gather and disperse at an intersection, they start to resemble flocks of birds, or water flowing, elements that speak to patterns of nature, and they start to locate man’s relationship to the concrete construction. Hip hop is a way to harness the chaos of urban life and to layer your impressions of your relationship to that landscape." Interesting: visual rhythms inspire his music and it is the urban scene, not the rural, that he finds chaotic. Could others be influenced by aural rhythms, the way he is by visual ones? And if Adam could be so influenced at the age of two, could not some be influenced, but below the conscious level? (For how conscious can we be at the age of two of what influences us deeply, and how?) Perhaps we are all influenced, in ways we can only guess at, by ambient sounds and rhythms, visual and aural, way below the conscious level.
Posted by Dave King at 08:46 No comments: 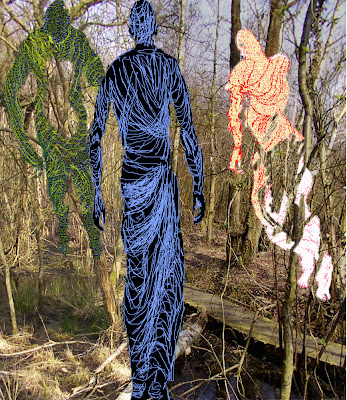 Was going to be another in the Raising of Lazarus series, but now I'm stuck for a title. Any suggestions?
Posted by Dave King at 19:25 No comments: