When the bones rose up...

I have linked this poem to dVerse Poet's Pub Open Link Night Trick or Treat hosted by Tashtoo
Posted by Dave King at 08:00 18 comments:

Trying to Know Myself

Hobgoblin2011, at dVerse Poets' pub, prompting for Poetics, set us to compose a self portrait.
Posted by Dave King at 09:45 20 comments:

Written for Semaphore's (Samuel Peralta's) prompt at dVerse Poets' ~ Pub asking that we attempt the Villanelle form, and giving as his model the world's best (probably) and best known (certainly) example, Dylan Thomas's Do not go gentle (read it here)
Posted by Dave King at 10:41 21 comments:

Fragmentary Ruminations on The Natural Man and Nature 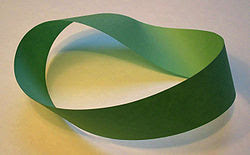 A Möbius strip (image from the Wikipedia web site)
Posted by Dave King at 12:20 13 comments:

The Gospel According to a Rat...

Art School -- could boost or bugger you

Written in response to Victoria Slotto's rich selection of prompts, Steampunk and Enjambment - but there's more than this on offer - at dVerse Poets Pub. Go see, why don't you?

I chose to work with enjambment and to write again about a boy who was the subject of a post almost exactly four years ago. You can read it here.
Posted by Dave King at 09:53 24 comments:

Yesterday was the 25th anniversary of the great storm - the hurricane that cut huge swathes across the South of England.
Posted by Dave King at 09:41 17 comments:

The Quick and the Dead

I Graduate at Last - Total Idiot: Class A1+

[He is feshly from the school coach that brings pupils from outlying areas. Known to me as a frequent visitor to Hankley Common, an area still used by the military for training purposes. He looks for "stuff" - and seems to have mounted a successful expedition recently, for he cradles affectionately in his arms a serious looking piece of ordnance, a tordedo shaped object with fins at the non-business end. One of the fins is deeply scorched. He has a crowd of interested admirers surrounding him.] [They all leave for the playground and I do as I've said I would, but in the sick bay change my mind. Reassured by all the scorching that whatever was inside the thing is "spent", and warming to it, I'll make it - I decide - a visual aid, and use it in a lesson for the children. Now wrapped in sick room blankets and some fluffy pillows, it is ready for its transportation to the field. I lay it on the grass, and round it place four chairs to which I tie some yards of tape to fence it off. Then I have my next quite brilliant idea: I call the bomb squad. They arrive - to great excitement from the children - in a remarkably short time.] [and here he points, in a one fingered fashion, to the first house in The Close. His thumb is raised, as though he means to simulate a gun, and now he sights along it as his finger points to each house in its turn...] [I heartily agree. He compromises, says he'll go for a diminished bang. Sandbags the incendiary and prepares a controlled explosion. He'd had the "fire bomb" underneath his bed for months. He found it where I'd thought - on Hankley Common. The coach driver had taken it from him at one point - and dropped it!
Posted by Dave King at 11:16 9 comments:

Out of the wood two women came.

Meetin Up Between the Acts

Another oldie (part of)! I happened to be in the process of taking down and dusting an early poem (version 2: on how the German Luftwaffe gate-crashed my sixth birthday party)when Claudia posted her prompt for Poetics over at dVerse Poets. My original poem can be found (here)
Posted by Dave King at 09:34 23 comments:

On the square, tucked away beside the willow tree, the chalked outlines of a hopscotch game. All afternoon the skipping - more like dancing - had gone on, the children's numbers slowly swelling amid much laughter. All this between the showers, which as you might imagine, only magnified the children's sense of fun.

It is after one such shower that perhaps the smallest girl of all successfully regains her pebble and dances back, but fails to stop, dances on in fact, as though in celebration, as though to do a lap of honour round the square. In fact, once in the open, unobstructed area, she stops, produces a few sticks of chalk from her coat pocket, stoops down and begins to draw on the grey stones - what? - her own, private hopscotch court? If so, a hopscotch court out of this world. Overblown. A hopscotch court for giants, perhaps. Soon it becomes clear that this new figure is voracious, a land grabbing monster that has designs on the whole square. And as it grows,it takes on aspects of a landscape - a rather surrealistic landscape, home to denizens and features in need of some interpretation. Sure, there are figures here I can't decode - the iron lung, for instance - and the whole ensemble seems something more organic than a simple hopscotch matrix. An environment in which strange artefacts and creatures might take form - are taking form. Are having their mysterious geneses. She skips back to the game she left. The little girl invites her former playmates to her new homeland, though they are having none of it. They laugh and turn back to their game. But by tomorrow they will be victims of her web, caught up in a game whose rules and object are too complicated and involved, far too sophisticated for the likes of me.
................................................................................ This poem was written for the dVerse Poets prompt - more than a prompt, a mastercless - by Anna Montgomery on Prose Poetry. Do go over and read the piece for yourself.

Some of you may have had a feeling of Déjà Vu reading this. I did post a version (without prose) back in February. (Here ) I was dissatisfied with it. Reading Anna's post it struck me that a prose/poetry version might hold some hope of salvation for it.
Posted by Dave King at 11:32 19 comments:

My Computer Is My New Teddy Bear

Love/ Hate relationships are the theme for this week's prompt at Poetry Jam
Posted by Dave King at 12:00 15 comments:

One Guy's Whacky... Another Guy's Scoot

I discover in The Times this morning that a science competition has been running to explain why a beaker of boiling water freezes more quickly than one of cold. It seems that science has only recently accepted this fact of common experience, and no one is sure why. They had expected about 200 entries, but received over 20,000. Therefore (as from mid-day today), they are inviting visitors to their site to help them choose the winner from a mass of songs, poems, dissertations of all sorts. Too late for the comp', I offer my humble solution here. The website, should you want to to take a peek, is at www.rsc.org/mpemba-competition/
Posted by Dave King at 09:16 9 comments:

Who sees the abuser abuse?

Submitted to The Mag as a (somewhat off-piste) response to Tess Kincaid's thought provoking prompt.
Posted by Dave King at 09:48 23 comments: