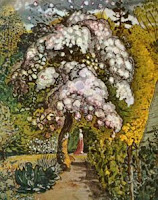 Landscape is a word meaning different things to different people. To some it conjures up a cityscape, to others a picturesque view, a holiday snap perhaps, and to yet to others it suggests a fragment of a golden age, a time gone by that maybe never was. If the possibility existed to offer the services of a time machine to take such folk back in time to walk the hills and meadows of Wordsworth and Constable et al - not necessarily to walk with those giants, but to see the world as it was in their day - I guarantee you would have no shortage of takers. It isn't, of course, and most folk know well enough that the clock cannot be turned back, yet they still bemoan the fact that "modern" (i.e. contemporary) painters and poets neither paint nor write they way their predecessors did, nor from the motives that those far off masters had. Ask why they think that is (not good enough to say that 'It has always been the case) and you will get a range of answers. Here are some I once received:

Beauty isn't fashionable.
Nature has been done so much and for so long that it has become a cliche.
They can't draw the way the old masters did.
You have to write about what you know. They live in the cities. They don't know the countryside.
They are just straining to be different from all the other artists.
In a word: money! Fashionable architects and celebrities want slick abstracts.
Landscape has become a warehouse wall with two kids doing graffiti

The emphasis was all on the change that has come about in the artist or poet, about "what has always been the case" and not about what I think must be at the heart of the matter, the changes that identify what we see today as being in a different category from those seen in the past. We are talking changes that we have wrought in the landscape itself. In nature, no less, for if by landscape we mean rural landscape (as for the purposes of this post, I do), then it is well known that before the Romantics triggered their seismic change in how we think and feel, places like The Lake District gave rise to fear and and horror. They were dangerous places to be avoided. In recent times there has been another seismic change. To think and feel deeply about landscape was always to look beyond its physical beauty, to a something else, to something transcendent. Now, though, it involves looking beyond even the something else (though hopefully not to overlook it) in the knowledge that the very existence of what we see is under threat - and by us.

The nature that Wordsworth knew is all but a thing of the past. The landscape is tainted. It no longer holds excitement or mystery as once it did. Maybe a poet of Wordsworth's stature is needed more today than ever. The visionary (positive) eye to see beyond the green issues as they are now being debated (in very negative, pessimistic terms), to see and to feel the effects we have upon the landscape and the effects of the landscape upon us, both as they are and as they could be. Such poetry of landscape as is around today tends to be descriptive. We need it to tackle relationships, to look at how (to quote one of my respondents): "... the blighters have sprayed it with their insecticides and their anti-this and anti-that concoctions, how our fields have become killing fields." It is in the same bracket, she almost suggested, as the Americans spraying their defoliants in Vietnam. Venture along that line and you have at least to say that the two things, if in the same category, are at opposite ends of the spectrum. But there, the point is made: the countryside is no longer what it was. As Wordsworth put it, rather more eloquently:

"The things which I have seen I now can see no more,”
and later that...
“The sunshine is a glorious birth;
But yet I know, where'er I go,
That there has past away a glory from the earth.". 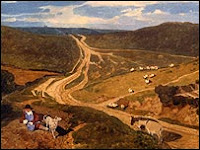 Such feelings of poignancy and of the ephemeral essence of nature were always at the fount of poetry. The question is: how appropriate are they as a response to to the changes we have made to the planet? And even more pertinent: how useful to our need to work through and come out on the other side? for it is not just a matter of insecticides. We have been busy in many ways. Perhaps the scene we are looking at has been genetically modified in parts. Would that matter? Should it matter? In many people the possibility occasions strong negative feelings, even those pre-Wordsworthian feelings that the countryside might be a place of danger. Should poets be any different? One day maybe, those for whom it is currently a stumbling block, who are able to see the countryside only as an aspect of creation that has become both threatened and threatening, will be able to see the otherness despite (maybe within) the genetically modified, and through the horrors that have perhaps befallen it. But it may take a genius of Wordsworthian or Poundian proportions to sensitize us all to that particular vein of thought. The point is that even where the scene still appears to be of the same order, the hidden attributes have changed significantly, and our reactions to it and feelings for it have changed accordingly. We approach with sentiments from which perhaps no great poetry can spring. And if we turn (for one moment only) to city landscapes, the situation may well be worse, occasioning perhaps even more extreme feelings of guilt to do with global warming and much else.

Seamus Heaney, writing on nature poetry and the art of Haiku (The Guardian, 24,11.07), quoted Ezra Pound commenting upon his poem "In a Station of the Metro" - a poem initially of thirty lines, which he then spent eighteen months whittling down to its essentials. We know it as a poem of fourteen words expressing the original and now famous "Haiku moment" when he saw that crowd streaming out of the Metro station and set about finding an image to encapsulate it.

"The apparition of these faces in a crowd:
Petals on a wet black bough."

It is close to the English feeling for landscape which can perhaps best be seen in the works of the English watercolourists: Cotman, Constable, Turner et al. but not forgetting the likes of Blake and Samuel Palmer. To quote Pound again, it is that quiet, hinted-at moment when "a thing outward and objective transforms itself, or darts into a thing inward and subjective." It is Heaney's "worldness" of a scene," a "worldness" which yet has a strong sense of another world within it. It is to this other world. he says, that the poetic expression promises access. But it is also a moment of pathos, the two elements of which are its physical beauty and the ephemeral nature of that beauty. We have no trouble with the transience of beauty, we see that all too clearly, but the beauty that we see is the outer beauty, the physical beauty, the beauty of its "worldness". The sense of that other world within the worldness is the beauty we have tainted, and in the main it now eludes us. At times, maybe, it is no longer there - and will not be there until that second Wordsworth comes.
Posted by Dave King at 11:50