A Tale for Today 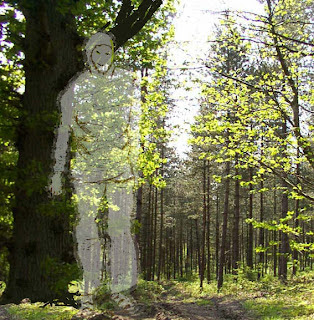 Near where a boy had walked
who had been walking home,
who would never be seen again,
had been other boys, playing with knives.
That is, they said that playing had been the whole of it,
they told the police they had only been playing,
and even as they told the police it was play,
the boy was walking home who would disappear
somewhere between the edge of the wood
and that new monster hotel they are building - and all
while Miss Melissa was playing her violin. (Bliss
themes mostly, from Things to Come and the ghostly
Motifs composition of her own.) Much has been made
of Miss Melissa having played her violin
beside an open window - knowing, his parents now
maintain, that he would pass that way, and knowing
the very disturbing and unprecedented way
her Motifs acted on his fragile mind.
It has been established, almost beyond doubt,
that the boy did pass her open window,
that he passed it as he was walking home,
that he stopped to listen, as she had known he would,
and that he did all this just before he disappeared.

It has also been confirmed that the Mallows were arguing.
It is thought that the boy heard their angry voices
and was never heard of again.
From the Mallows' cottage you can see the sea,
and just where the sea is deepest blue
a tall ship taking part in a tall ships' sail-past,
had thrown its canvas to the wind. The boy, who loved the sea
and vessels of every sort, and had perhaps been making for
the jetty (just a small diversion from his journey home)
to get the best view going of the passing ships,
would not have seen its graceful lines - nor any others - glide
out from behind the headland like a dancer from the wings,
would not have seen its bows and curtsies to the tides and winds,
would not have seen it cast its shadow long on sea and dune
as if it cast a net, as if
the fading footprints of the boy
were small fry in its mesh; as if
a crumbling edge of sand was all the world could know
of one strange lad who'd loved its touch-and-see-ness,
then had vanished from it just a breath ago.
The Mallows could no doubt have vouched for what had passed: the boy,
supposing only that he had been found, could have said only that
before the schooner cleared the bluff
they'd watched him disappear for ever.

It might or might not be coincidence
the way they found the bird's egg smashed
beneath the large oak close to Sangster's copse,
and on a bough above the nest, the boy's cap snagged,
and on the smashed egg
two fresh sprigs of mallow - crossed.

Outside The Prince's Arms, not looking where he was going,
the boy was seen to trip and graze his knee.
An old man helped him to his feet. The man, not being
recognized by any locals, has been dismissed by them
as having been a tramp. The boy, thanking him
asked did he like his trainers - they were new.
The old man knew nothing about trainers,
but knew something about sad boys with knives
and earlier had seen the boys who had said they were playing,
throwing their knives at the hares in the Mallows' field -
the field which had the tree, the boy's cap snagged,
the smashed bird's egg and the sprigs of mallow.
The old man warned the boy to take great care
and said the boys with knives had all been smeared with blood
and had been laughing, even boasting of a stray dog they had killed,
some mangy old dog that had strayed their way.
The boy, while maintaining that he could perfectly
well fend for himself, promised to be careful,
then advised the old man to go
and listen at Miss Melissa's window,
to which the old man said he surely would -
and all of that ocurred soon after the boy had disappeared.

The police, who admit to being baffled by his multiple
meltings into thin air - and even more so by
their synchrony, have appealed for witnesses.
The missing link in the evidence, they think,
is being held, all unwittingly, by someone
who didn't see the boy at all that evening.
Posted by Dave King at 10:46

I spent some time with this, Dave, and fund it extremely gripping and intriguing.

Usually, I like to try to take a piece of writing for what it is on the page. Normally I feel if the writer wanted to tell us any more then he would have done it.

(So leave it alone, Ken, and deal with what you are given).

However, in this case, my curiosity is greater than normal, I would certainly like to know more.

So if you prefer to leave the piece stand without further comment, Dave, I fully respect that.

If you'd care to tell me more, I'd like that too.

I too am intrigued, but respect a secret held.
Either way as a general commentary or about a specific episode - it is extremely relevant - and works magnificently as a piece of writing.
I think I'll stick with the intrigue, I wouldn't want to diffuse the power.
Congratulations Dave.

I've just spotted your very generous gesture Dave - the link in your bloglist.
Thank you - please permit my reciprocation - for no other reason than your writing deserves it.

Ken,
I don't quite know how to respond. I have only jus finished writing the poem (I have never before put a poem in the public domain that quickly)and cannot think of any more to tell you. Maybe I will, but unusually for me the poem all but wrote itself. Maybe I'll write a sequel. Watch this space!! In the meantime, my thanks for your very generous remarks.

I can say it was meant to be a specific incident, but with some relevance to contemporary issues. It is not, though, based upon any actual incident - at least, not to my knowledge.
Thank you for your kind remarks and for the offer to add my blog to your list.

This is truly fascinating work. I think I need to print it out and carry it with me. I am determined to find the hidden evidence. Thanks for a great read.

I'm with Ken...there is a "what's the rest of the story?" quality to this work I wanted to discover. But then again, mystery does make the world go round.

Maekitso
Thanks for that - and for dropping by. I am beginning to feel very encouraged: so many kind words.

Hope,
Thanks for that, and for the gesture of dedication on your blog. Very much appreciated.
Yes, mystery does make the world go round - for me at any rate, but £the truth is out there". My bones are beginning to tell me that there will have to be a sequel some time or other to resolve at least some of the questions.

It's an impressive piece, Dave. Its slow, steady voice and the use of repeated words and phrases bring to mind an official witness statement. I, for one, would not wish to know any more of its provenance. Much of its effectiveness depends upon the allusion, fragmented evidence and overall mystery of an authentic case.

Dick
Thanks for the feedback. As I have said earlier, I put this in the public domain before I normally would, partly because I was unsure about it, so all comments are helpful.

I've spent a good bit of time on this piece. The main reason was I had to be in the right frame of mind to tackle it I have to say had I just stumbled across it elsewhere I would have simply passed over it and that would have been my loss.

I have no great words of wisdom to impart. The language is effectively used, appropriate to the subject matter and suitable evocative. I don't expect there is an answer and that's the point: it's a mystery.

What I did do was paste the poem into Word and reformat it - totally. In fact I broke it into paragraphs each a single sentence in length so I could see each one clearly.

Two things I would suggest - and I do not propose any solution - firstly, have a look at the layout because it is a very wordy piece (it's its charm)and I kept getting lost and, secondly, go over the punctuation carefully because I reworked a few of the sentences to make them clearer to me. The long sentence beginning "The boy, who loved the sea..." especially needs looking at because of its length although it's not the worst offender.

That aside I enjoyed this very much indeed. Personally I'd turn it into a story but that's just me.

Jim,
You have given me a lot to mull over, for which I am very grateful and which I shall begin to do anon. Such comments are always welcome, but particularly so in the case of this piece as I posted it in part because I was unsure of it, as I think I have observed before. Partly I was not sure because of the way it got written - which was quite unique in my experience. It is reassuring that you find its wordiness to have a plus side, as that was deliberate. I do agree that I might have overdone things with the long sentence beginning "The boy who loved the sea". But now I need to cogitate before responding further. Thanks again for the effort made.

It winds and winds about, and the plot thickens. I must come back to it. It's certainly shivery!