Death of an Anti-War Horse 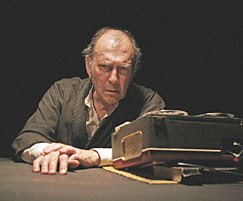 I will stick my neck out and say that Pinter was by a distance the greatest playwright of the late twentieth century, and that only Beckett got anywhere close to challenging that position.
Pinter used everyday speech forms - yours and mine - and from that rock face cut his poetry.
As a poet he wrote prose poetry, but yes, he was a poet also, and a scriptwriter - and, as I wish to stress here (for others can write with greater authority on his plays), an effective anti-war campaigner. Yes, I use the word effective, though I'm not sure how much notice was taken... but then are we ever? I know with my own conscience that it sometimes has to nag for quite a while before I allow it to take effect.

Here is part of his speech of acceptance for the Wilfred Owen Award for Poetry ; 18 March 2005

This is a true honour. Wilfred Owen was a great poet. He articulated the tragedy, the horror, and indeed the pity -of war - in a way no other poet has. Yet we have learnt nothing. Nearly a hundred years after his death the world has become more savage, more brutal, more pitiless....

... We have brought torture, cluster bombs, depleted uranium, innumerable acts of random murder, misery and degradation to the Iraqi people, and call it Bringing freedom and Democracy to the Middle East.But as we all know, we have not been welcomed with the predicted flowers. What we have unleashed is a ferocious and unremitting resistance, mayhem and chaos.

You may say at this point, What about the Iraqi elections? Well, President Bush himself answered the question only the other day when he said: We cannot accept that there can be free democratic elections in a country under foreign military occupation. I had to read the statement twice before I realised that he was talking about Lebanon and Syria.

And here an extract from a Dear Prime Ministerletter written to Tony Blair in 1998 - after the 1997 election:

We have been reminded over the last few weeks of Saddam Hussein's appalling record in the field of human rights. It is indeed appalling: brutal, pathological. But I thought you might be interested to scrutinise the record of your ally, the US, in a somewhat wider context. I am not at all certain that your advisors will have kept you fully informed.

The US has supported, subsidised and, in a number of cases, engendered every right-wing military dictatorship in the world since 1945.

He went on to give details of the death toll in Guatemala, East Timor, El Salvador, Nicaragua, Indonesia and the devastation wreaked in Vietnam, Laos and Cambodia, before signing off on a somewhat more friendly note:

Oh, by the way, meant to mention, forgot to tell you,we were all chuffed to our bollocks when Labour won the election.

The Disappeared Lovers of light, the skulls,
The burnt skin, the white
Flash of the night,
The heat in the death of men.

The hamstring and the heart
Torn apart in a musical room,
Where children of the light
Know that their kingdom has come.

The day will get off to a cloudy start.
It will be quite chilly
But as the day progresses
The sun will come out
And the afternoon will be dry and warm.

In the evening the moon will shine
And be quite bright.
There will be, it has to be said,
A brisk wind
But it will die out by midnight.
Nothing further will happen.

This is the last forecast.

why does death during the holidays feel somehow more sad than usual?

i watch a thing on bbc about harold pinter. an outspoken man he was. i didn't know any of his work, so thank you for posting 2 of his poems. they are a good read indeed.

Well done Dave! Pinter means a lot to me and his passing made me sad - although I had wry smile that he would die on Christmas Day of all days.

I acted in one of his plays once - 'One for the Road' and saw a little of him acting in the same play - that drew me closer than anything, I think.

And Eartha Kitt, as you say a bad year for good people dying. She was sexy to the last... and that's good going.

Eartha KItt...a shooting star, also outspoken against the Vietnam
War, which led to her career taking a nosedive. Courageous in all aspects.
Harold Pinter...The words, so common... the pause... that lengthened into menace...so Pinteresque!

Shadow
Maybe the fact that it was Christmas partly explains it, but it did come as a shock - although I knew he had been in poor health.

Ken
I know someone who thought that pinter was more sexy tham Eartha Kitt!

Lyn
Yes, you are absolutely right. She had to stay out of the States, I believe for some years.
And then, of course, there's Kittish - okay, I'm pushing it a bit there!

Deaths always seem sadder at Christmas. But the loss of Harold and Eartha would be a loss at any time

Agree totally about Pinter, Dave - a sad death but his health has been so fragile for so long that I am sure he was ready to die.
Love that second "weather" poem.

Surely, these two deaths would have been felt at any time but the end of the year brings a special sadness which can be applied to loss of any kind. I enjoyed Pinter's poems and watched Eartha Kitt's interview with Gwen Ifill. These two were delicious people, each in a different way.

Eartha Kitt was born in my state and even when I was a kid she fascinated me! [And not because she was in the "Batman" t.v. series]. She was like an exotic cat...simply no one else like her. Recently the local radio station played two versions of "Santa Baby"...one by Kitt, the other by Madonna. Let's just say Madonna has a lot to learn about sexy.

I didn't realize Pinter had died also...too many relatives around, not enough time to read. At least he left us something to remember him.

Nice tribute to HP I like the heart beat in the first poem 'heart torn apart' speaks volumes!

Of course Pinter and Beckett were great friends. In fact Pinter used to send Beckett copies of his plays for his approval although I do not believe Beckett returned the compliment.

Thanks for these quotations and poems. Pinter has always been a great inspirer and his poems have not yet received.
Thanks also for making me aware of Eartha Kitt's death. She was indeed a hero and in her recent interview on TV, looked as good as ever.

Dick
Thanks for that. I have been to yours. Very impressive. You covered all the angles I didn't feel I had the knowledge to do justice to. (ouch! Not very stylish, that.)

Weaver of Grass
Yes, he had been through the mill, poor man - and yes, the weather poem is a favourite of mine.

Hope
Totally agree about sexy and the Madonna comparison. I actually caught the end of a news flash that "a playwright" had died. Didn't realise for a day or two that it was Pinter. Like you, too much else going on.

SweetTalking Guy
A brilliant stroke that!

Jim
I knew that they were friends. Didn't know the other bit, though.

Lucas
What they call a double whammy, I believe, losing both together.

Thanks for coming by to visit, and for your kind words. Pinter is not the only poet cutting poems from rock face on this blog, I think.

You Tube has Pinter's 2005 Nobel lecture on Art, Truth and Politics - one of the most intelligent speeches I've ever heard. A sad loss for the world indeed.

One of my favourite Pinter quotes:

"When the storm is over and night falls and the moon is out in all its glory and all you're left with is the rhythm of the sea, of the waves, you know what God intended for the human race, you know what paradise is."

Thanks for stopping by my blog. Your posts on your blog are so interesting....so thought provoking! I will definitely be back...nice to have connected. :)

Jeanne
Welocme. Enjoyed my visit and many thanks for your kind words.

Janice
I did consider posting HP's Nobel acceptance speech, but thought it might be a little too much for my blog to carry. I didn't know that it was onYou Tube. Thanks for that bit of inf'.

Barry
Couldn't get a quote more apt than that, I'm thinking.

Andrea
And welcome to mine. Ditto.

Cloudia
Thanks and a great, goodNew Year to you.

I'm not sure I'll be able to put "Weather Forecast" out of my head for a good long while.

Of course, when I think of Eartha Kitt, I can't help but visualize Cat Woman. In fact, I did a post on her role (amongst others) on my Blasts From the Past blog. She was fab!

Thanks for introducing me to Pinter's poems. I'm not sure I would rank either him or Beckettt as the greatest playwright of the C20th but then there's more than one way of defining 'greatest'. I'll definitely look further into his poetry.

You're right about Pinter. And Eartha too. A quote from Eartha without that delicious provocative voice would not not be enough. A Happy New Year to you .

A fascinating juxtaposition, Dave. And I think it's so hard to lose "big voices" like Pinter's and Kitt's so late in the year because it is a time of reflection. That makes the loss that much more poignant. They shall not be with us in 2009.

Speaking of which, Happy New Years!

Thank you ;-) you should look at this emo boy hair over this blog:
http://www.emo--boys.info