Picasso's Les Demoiselles d'Avignon - and mine. 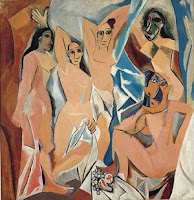 The painting measures 8 feet by 8 feet.
Picasso worked on it for over a year.
He produced over 400 sketches for it.
The composition originally included two men, a sailor and a medical student.
The "Avignon" in the title is not the town, but a street in Barcelona's red light district.

So, these young ladies are prostitutes, and from them, many would maintain, sprang the whole of what we now call modern art. They caused shock and horror on their debut and still are often greeted with incomprehension. I, like most, have had my difficulties with them, not least of which, the question of why each was conceived and rendered in differently. For example, to the figure on the extreme left paint has been applied more thickly than is the case with the others. Her head is more classical in conception than are theirs. In the center are two figures influenced - or taken directly - from Iberian sculptures. One wears a mask taken from African art, while the two central, standing figures have been graced with a few curves which have been denied to the others, for whom sharp, splintery, geometric forms are the order of the day. They all seem to be in no sort of relationship with each other, like five figures imported from five other paintings, and all stare out of the picture frame as if at the viewer. They share a common colour scheme. These three facts are about all they have in common.
This multiplicity of styles within one painting was, and is, a stumbling block for many critics. What was Picasso driving at? It is of no help to point to what others have found in the work, or to emphasise the influence it has had on Modernism. (See January's post "It's how he Sees It".)
Neither of the two standard responses seem to me to be wholly convincing. The first of these says that during the time Picasso took to complete the work he, being the artist he was, took up and then discarded several styles, and that our five chicks who were all laid (shall I say) at different times, were depicted accordingly. Like Salisbury Cathedral, I guess, thoughoils, unlike architecture, allows the artist to go back over earlier work in the light of new insights. The other response is to say that he was trying to make us look, to make us see. The extended effort that he put into the painting is clear evidence, I think, that he didn't see this as one more painting, but as something special. Ground-breaking, even. It has been said that if Picasso had died before 1907 he would have been an interesting minor painter. After this he was a colossus.
My own view is that this is Picasso pushing at the boundaries. Having five young women to work on, gave him the opportunity to push against five different boundaries. It is him saying (discovering) "So, if I push Cezanne to the ultimate, this is where I get to, whereas African Art pushed as far as it will go, will land me here," or "This is journey's end so far as Iberian sculptiure is concerned," and so on. It is the new Martin Luther nailing his theses to the cathedral door: "Copying is out. Copying is not reality." No longer is it the case that you look at something and then try to reproduce it, you look - or not, as the case may be - and think about purposefully changing it. He is rethinking the grammar, the syntax of painting, and he is discovering, for himsel but also for those who would follow, potential ways to paint - in this case, women. It is, if you like, his sampler. And the reason it took so long and so many studies is because he had to figure out how to blend five differing styles into one cohesive painting.

I have taken the liberty of adding for good measure my own depiction of Les Demoiselles, shown in happier days, relaxing on an away day to the beach. I did attempt to portray each of the young ladies in a completely different style. (It was actually quite tricky, and I did not persist.) Oh, and I have reinstated one of the young men - the medical student, as it happens. The sailor proved to be a bit of a misfit, and Picasso was quite right to leave him out. 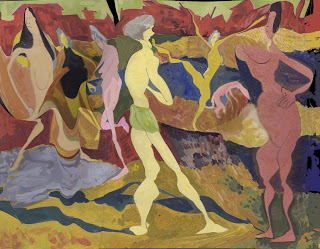 Generic Viagra (sildenafil citrate; brand names include: Aphrodil / Edegra / Erasmo / Penegra / Revatio / Supra / Zwagra) is an effective treatment for erectile dysfunction regardless of the cause or duration of the problem or the age of the patient.
Sildenafil Citrate is the active ingredient used to treat erectile dysfunction (impotence) in men. It can help men who have erectile dysfunction get and sustain an erection when they are sexually excited.
Generic Viagra is manufactured in accordance with World Health Organization standards and guidelines (WHO-GMP). Also you can find on our sites.
Generic Viagra is made with thorough reverse engineering for the sildenafil citrate molecule - a totally different process of making sildenafil and its reaction. That is why it takes effect in 15 minutes compared to other drugs which take 30-40 minutes to take effect.
[b][/b]
Even in the most sexually liberated and self-satisfied of nations, many people still yearn to burn more, to feel ready for bedding no matter what the clock says and to desire their partner of 23 years as much as they did when their love was brand new.
The market is saturated with books on how to revive a flagging libido or spice up monotonous sex, and sex therapists say “lack of desire” is one of the most common complaints they hear from patients, particularly women.