The penultimate page. Next week we finish with a stroll around the grounds. 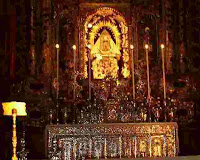 door is opposite.
A place of meditation now.
(Shambhala the ancient city
can be reached.)
Put to many uses in its time:
mosque, temple, wine store.Popular with tourists,
it bids you pause
and spare a moment,
read (at the open page
and for your own enlightenment)
its “Angel Bible",
paraphrased by Clare
in blank,
unpunctuated verse
and annotated in her hand,
illuminated in the style of Blake
and bound in Angelskin -
the formula for which
died with her, we believe.
Her finest work.
And then the wagons really rolled!
Machines took over; Clare controlled
the commerce; visuals
were left to others.
Unit-planned, prefabricated frescoes
multiplied the scale
(and distribution schemes the sale)
by several-thousandfold. Of all those sold,
few went to churches.

part old, part new, was once the sacristy
and then The Figurine and Puppet Room.
Now furnished in pale greys and greens,
its damp walls, blotched with portraits of past owners
(faces grow like fungi in the gloom)
and tapestries of scenes
that moulded them, this house and you and me,
allow each owner, son and wife
when tourists come to come to life.


Explorers all, the psyche was their continent who said:
All that we cannot know is flesh and bone.
The rest is local colour. They who led
us on in Pollock rhythms trailed around the world
or spent themselves in tricks and dribbles
(in and out of bed),
seem more substantial to us now they're dead.
Scene after scene is peeled away,
web after web of soft, reflected glow,
reflecting what we can and cannot know.

contains no instruments these days.
Instead,
a loop of tape
(and earpiece with acoustic boom
supplied at token cost)
gives flavour of
(a few short extracts only)
Ms Beatrice Paul's unlikely cult spectacular: A
Child Called Caryatid, or
A Pillar of Society.
Two verses from the lyrics follow here:


She'll dance with the devil for an offering on the drum,
the spirit of an age that has flown around the sun,
that wants to live for ever and believes it can be done.
Her brain is full of knowledge and her loins are full of love,
For a mind she has a gun-sight with its cross-wires trained above.
On how she will reach it, she is far from being clear,
for it's far beyond her range and she hesitates for fear
that the sun will melt her wings if she dares to venture near,
but she's calculated the trajectory and mapped it on a graph,
so suggest she will not reach it and she'll dance away and laugh,
and dancing to the music like a woman in a trance,
the images that come to her, she'll abandon in the dance.


It is hard now to remember that this woman proudly stood
among her people as the sanity among the superstitions of the wood.
Then the coldness of her thighs and the coldness of her brow
held an image that was clear, but is lost to man for good.
She's the mistress of our passions, she's the passion we avow,
so we listen to her stories of the days that are long gone,
of public adulation and the offerings upon
the altar stone she stood before, high above the people,
motionless, expressionless, dumb beneath the steeple,
and we think her stern and distant, with an act to run and run,
a bowl of living water from a river on the sun,
and we listen to her murmurs and interpret what we hear
as meaning that all meaning passed its use-by date last year.

The angelskin bit gave me a little shiver!

I have been enjoying these; they are very dense and puzzling, so not easy to make quick, glib comments on, but I am reading with interest.