With this post I emulate (in some respects) the protagonist from my recently posted poems and execute a partial disappearance from the blogosphere. I shall not push the analogy too far! I hope to continue to post, but fear I shall not be able to get around to you all as I would like. We have a busy, busy week or so on the horizon, with things not too pleasant to contemplate, and (hopefully) a few that are. So not all bad. See you all soon.

Some Greek orthodox monks who have lived an ascetic life on the remote Mt Athos peninsula since Byzantine times, who are noted for having banned women completely (and even female animals), and for having chosen (some of them) to live solitary lives in caves, have made a giant leap into the twenty-first century by providing themselves with broadband internet access. I assume that the ban does not extend to images of women.

Maureen Lipman related the following anecdote in The Oldie magazine recently:
A white-haired ladiy leaving a performance of Chekov's Cherry Orchard (in which Lipman was playing Charlotte, the governess), was heard to remark yo her companion: Well, I thought it was very enjoyable, didn't you, Mary? But why on earth they had to set it in Russia, is beyond me

A survey has found the following books to be unreadable - i.e. unfinishable

Each of the above had recently been included in a must read or not-to-be-missed list. 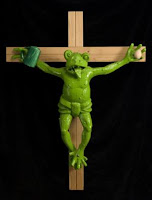 This from The Independent on Sunday:

A sculpture of a crucified frog was threatened with eviction from Bolzano’s new modern art museum after being condemned by the pope, but the minister of culture and local right-wing politicians insist it is staying where it is.

Today the museum's governing committee decided "by a clear majority" to keep it on display.

The work by the late German artist Martin Kippenberger shows a lurid green frog, warty and bug-eyed, nailed to a cross with its tongue hanging out - but holding a foaming tankard of beer in one hand and an egg in the other.

Exhibited in the inaugural exhibition of the new Museion in the centre of this German-speaking city in Italy's far north, it was said by the museum curators to be a self-portrait of the artist "in a state of profound crisis." But attacks on the work, which began locally, culminated in a letter to a local critic from the pope and a condemnation by the minister of culture.

The principal question you can ask of any artistist is: what difference would it have made if they'd never existed?

I am pushing my luck perhaps, but at the risk of becoming an absolute bore, a few further words on my recent three poems, my trilogy, as I have called them. For those of you who have been good enough to show an interest - even to suggesting that I should try to bring the three parts together - this, as they say on News 24, is breaking news to the effect that I am pruning the third poem, Going Back (posted under the title The thing a poem has to be), cutting out redundant words etc, and have reinstated the original ending, which I did not post. Here, if you are still with me, it is:-

To him it must have felt
the dream would never end: the stress;
continuing uncertainty - all this
releasing memories... somatic some
and only later of the mind:
a smack returning to the face...
from what: a hand?
a wave? The churning gut...
sea-sickness? fear?
and still the strain, the
ambiguities that fed
the fantasies; the slow
unfolding tale.
And even as he plied
the iron, to smooth
the creases in that tale,
a coast guard on the promontory
abseiled down to rocks
and tiny spits of sand,
where boys trapped by the tide
had been reported seen, and found
there, two of those who'd thrown the knives
and taunted him, and further round
the headland, washed-up on the sand,
the body of the boy who'd disappeared.
Posted by Dave King at 07:00

That sure is a bizarre sculpture, hope you won't be missing from blogosphere too long!

Relief! I thought I must be the only person to find Salman Rushdie unreadable - until now.

Sorlil
Bizarre just about covers it, I think - just about. No, not too long.

Solitary Walker,
No, there are quite a few of us, I believe... though I di read The Moor's Last Sigh - and enjoyed it once I had managed to accept its main conceit.

And again!
And this time there are evn more of us.

I keep re-reading the first chapter of The God of Small things which has the most beautiful descriptive writing about India - you can almost feel the heat. But I have never managed to get any further into it!
Hope you are not away too long as I do enjoy reading your blog.

Interesting booklist, God of Small Things I hated, hated, but Captain Corelli's Mandolin and Cloud Atlas i totally loved. Ulysees i got to page 7 but I have a colleague who has read it twice and loves it so i feel a need to try again...

I hope some of your time in the "real world" is pleasant. Until then, I look forward to your return to crank up my brain cells a notch and make me think. :)

Weaver of Grass
That is one book I keep meaning to read, but have never got round to.
Not too long if all goes according to plan. Thanks for the compliment.

Crafty Green Poet,
I, too loved Captain Corelli's Mandolin and cannot see how that got on to the list. I have read Ulysses 1.5 times. I got halfway through it many years ago, then read it and loved a few years back. Incidently, there was a Magnum photograph in The Independent the other day of Marilyn Monroe reading it - and she had my copy - the one with all the typos. Does that make me a celebrity? (I thought it fantastic, by the way.)

I know what David Hare is on about but the fact is that only a minuscule number of writers have anything like a measurable effect on the world. And the effect that even the great writers is such that the evidence, the knock of effect is not an obvious one. We're talking about life here, not a Newton's Cradle. Were I to ask myself had my writing made a difference the answer has to be: Yes, perhaps not a resounding one but I have seen people affected as they read what I've written. What comes of all that, who knows. Add that to all the other writers that individual gets exposed to in their life and what an onslaught! I will never change the world, not on my own. I am only one voice. That's no reason to stop talking, is it?

It's absolutely no reason to stop talking, Jim. I would say that because your contribution is unique and could only have come from you... well, you know what I would have said, only it always comes out sounding sentimental... heck, who cares, I'll say it anyway: it's precious - in the best sense of the word.
I included it because we had been having a discussion about whether some art work survives on the strength of its creator's personality (e.g. Damien Hurst)rather than on its own intrinsic merits, and what will happen to it when the artist is no longer around.

I managed 'Cloud Atlas' very painlessly. what's the perceived problem there, I wonder?

If the busy week involves matters of health, Dave, I wish you the very best. I hope you'll be back to full engagement very soon.

The whole Damien Hurst (and also Tracy Emin) debacle is an interesting one but the bottom line is that it's good marketing. They have gotten their art attention. They're in books and magazine and on the tele and that is what will see their work remembered. If 99% of the press they've had vanishes in some natural disaster they will still be remembered simply because there will still be something left.

As for precious…I've never been precious in my puff. I wouldn't know where to start.

Many thanks for your good wishes. As you so rightly guessed, health matters are involved.

Many thanks for your good wishes. As you so rightly guessed, health matters are involved.

Exactly, they are good at marketing - and that, surely is due at least in part to their personalities. Without those, where would the works be? And what is it that is most required of a work of art? Is it immortality? Nice for the artist, of course, but in general is that what we want of a work of art?

Dave, two issues here, firstly, what gives a work of start staying power: quality is not enough, it has to reach enough people so that is why I believe that artists who understand how the media works will, rightly or wrongly, be remembered; David Bowie was one of the first to cotton onto this I think, at least in my generation.

The second question of immortality is easier to answer: no. Every generation has its art and a few representative examples will last. When I was a kid growing up there was a year when the charts were full of novelty Xmas hits. Who would've imaged that Slade's 'Merry Xmas Everybody' and Wizzard's 'I Wish It Could Be Christmas Everyday' would become the Xmas carols of the future but that's they way they're going; my daughter can't remember a Xmas without them.

Jim,
I can accept all of that, but I cannot quite get my head around the question of why an artist or poet, to take a couple of examples, can so often be remembered, even by his cognoscenti, for works which are not his best or most important. Taste and fashion may have something to do with it, but don't seem to me to be a complete explanation.

How will history remember the artist Richard Hamilton? By one painting, Just What Is It that Makes Today's Homes So Different, So Appealing?. I'm sure he has made hundreds of works of art but that's the one that has had staying power. Why? Because every art book you pick up sticks that one in under Pop Art. It's an okay work of art but that has nothing to do with it. It's simply the fact that it's always there.

A lovely scrapbook of a post. What jumped out at me was the book list: "Goblet of Fire" unreadable? Every child in the country has read it... isn't that the whole point? And of all the others, I haven't finished one.

The crucified frog made me chuckle--I realize that many people may find it offensive, but not me. Of course, I'm not a Christian...

Like this new version of Going Back, Dave--tighter, stronger and therefore more evocative. The thing a poem has to be.