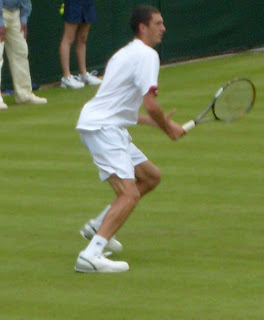 Last Monday I played truant. We spent the day at Wimbledon, on court number 1. (Part of the reason I got behind with my blogging programme.)

I used the occasion to try out my compact digital camera. We have been pretty much inseparable, it and I, since I acquired it a couple of years ago. It did a grand job of recording the Norwegian fjords for me and has proved a valuable work horse, a trusty all-rounder. Last Monday, though was my first attempt at using it for action photography. I knew it would be difficult, of course. There is a delay between pressing the trigger and the shutter operation.

The camera has a few calculations to make and will not be hurried. The fact that the actual shot you so desparately want will not wait for its calculations is of no interest to it whatsoever. I experimented, testing my ability to anticipate the moment at which to activate the trigger allowing for its abysmal response. 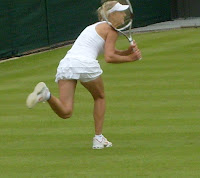 Total failure. Not only was I hopelssly out, but I didn't get any better as the day wore on.

There are other disadvantages to the digital camera as opposed to the film-laden one. The colours representing the shadows are not always very authentic-looking. The other biggy (for me) though, is its auto-focus and the fact that it makes all those damned calculations for you. 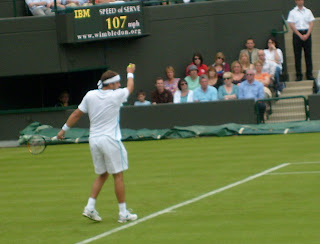 The problems here (again, for me)are those of not being able to adjust the depth of field and/or the shutter speed. On Monday this latter disadvantage resulted in some shots being far more blurred than they should have been. However, the auto focus facility is also one of its main strengths, of course, for me as for many other non-professionals - snap-takers, if you will. I do use the camera for recording purposes and not as an art medium, but I do also keep wondering if it is not time to change and let it replace the paint brush, but so far I have not taken the plunge.
Posted by Dave King at 10:00

Marvellous photos and whilst on the subject of tennis, I must confess that this is the first time in almost twelve years of living in the UK that I am feeling patriotic for my adopted land. And with a sport whose rules I still don't understand fully. Yes, Murray and tennis have caught me unawares and I found myself rooting for the Scot from the comfort of my couch last Saturday. Go figure. I read the two tennis supplements that came with the Guardian and Observer and I am beginning to understand the rules a little bit now, but still, I have a long way to go. In the meantime I will be tuning in today to see Murray.

Your photos are excellent. Loved especially the second and third one top to bottom.

A Cuban in London
Thanks for the comments. I, too, am rooting for Andy, as I have done for a few years now, but then I am a confirmed tennis fan. It will do the (British) game good if he does well, I think.

I think the thing with digital cameras is that you also need to be skilled in the use of Photoshop to get the best out of them and I'm afraid my skills are very limited in that regard. Carrie is much better. She can make people look younger than they are and everything. There's just too much to learn and not enough time to learn it all in. She got me a proper DSLR for my birthday and I'm afraid it's still sitting atop the unit in the living room where I put so that I could admire it. I will get round to it eventually. At least this one has a book. The last camera she got me just had a CD and much as I like computers there are times when a book is what you need.

There's a big difference here between what's possible with a compact digital camera and a full digital SLR setup. With a compact model, there are inevitable limits, but those are often there to make things more straightforward.

One trick for action shots is that somewhere in your menus there will be an option to take a burst of three or four photos consecutively, improving the odds of capturing the moment.

I have a new Nikon Digital SLR since last year and I am still amazed at the quality of shot that a fool such as I can manage. Jump. Jump. Plunge, plunge...

My lovely wife gets to go to the Men's Singles Final this year. Being a true tennis fan she will also queue for the outside courts on Friday.

I made do for several years with compact digital cameras until last year, when I got a digital SLR. I must say I was very happy with the results I got with my small Canons, but, like you, I occasionally ran up against limitations that prevented me from doing what I wanted to do. I find no such limits with the SLR. I'd say take the plunge and get one.

Very commendable photos Dave. Do you have an action button? I envy you your day at Wimbledon too.
How is the shadow painting coming along - seems as though this is the week to try it out.

We haven't tried action shots yet, unless you count very slow moving polar bears. This is the next big test for my husband.

Personally I think the camera and the paintbrush both have their place... But that has been my balancing act for years.

A starter level Canon EOS DSLY will get rid of the pesky delay and give you back to control you are looking for.

My digital camera has a setting for action shots. I like that the icon for it is a man appearing to run in fast motion. I think of it as my idiot button; "Hey idiot, if you want to slow down your running people, hit speedy little me." Works great when photographing kids!

Yep, editing is fun...and I haven't done anything really bad with it. Yet. ;)

The technology is moving fast...as said the SLR is your possible next move. I use my camera for very basic shots so I'm rarely disappointed. Wow, a day at Wimbledon!

I'm just an aim and shoot gal, but occasionally I get a good picture and then I'm pleasantly surprised and proud. I just got a new digital, too, and I'm disappointed by the close ups of some paintings. I think I should have changed the resolution. Wimbledon! Wow! Was it warmer than I experienced in London and surrounds last week? As an American southerner, I don't get warm until it's 85F.

I'm afraid I am one of those non-professionals that appreciates the ease of using my digital camera. However, I greatly admire you and your fellow professional photographers who know how to get great results by making adjustments.

I eagerly await your next poem.

We still like the photos, and the sedate audience back there makes the players so much more interesting.

It seems these days I only use my digital camera to plop on my tripod, set the asa to 80 and tungsten light, turn on the timer and snap my paintings. It is nice to be able to get an image right away. The small lens does make for distortion but I get around some of that by using the telephoto feature. My digital camera is old and really cheap. I like that.

Jim
I am sure that is absolutely the case. I don't even have photoshop. I use two cheapies: Serif Photo Plus and Paint Shop Pro. I'm sure that between them they don't get anywhere near doing what Photoshop can do, but even so I have not explored all their tricks. As you say, the time factor argues against doing so. I do envy you your DSLR, though. I had meant to put the case lack of a book on the anti side of my case for and against digital cameras. It is a consideration, I think. I do not like having to boot up everytime I want to consult the book.

stu
Yes, good point. I do have a burst facility. Must try that. Thanks for the suggestion.

Ken
I envy your wife her final ticket. My wife will envy her even more than I do. We do get to go most years. You may know that she ids disabled. They have a draw for tickets for disabled fans and their carers. We go in it each year and have been lucky for each of the past 5 or 6 years. Never had a fin als ticket, though.

David
The case for taking the plunge is mounting nicely! Thanks.

The Weaver of Grass
Not use if I have an action button as such. Must investigate.
Might just do that!

Carl
Much thanks for the tip. All duly noted.

hope
I like the idea of your running man. I certainly don't have one of those! I do have a lot of idiot buttons, though. Trouble is I need another idiot to explain them all to me. No, I must say I have been more than pleased with the results up to now, though it has mostly been used for family snaps and reference stuff for writing or painting, not for works in their own right.

Blue Sky Dreaming
Ah, yes, the other rpoblem was that taking the photographs I was missin g the tennis, so I soon gave it up!

readingsully2
Technology does tend to empty the wallet, I've found. Good luck with the new lens.

Karen
Yes, I'm an aim and shoot guy. That's the best thing about the digital I've found: you can shoot as many as you like and then delete the ones you don't like. Shoot enough and you must get something - that's what I tell myself.

Mary
I'm no professional. Far from it. Like most, I chose the compact for simplicity!
The next poem is on the way. Thanks for the comment.

lakeviewer
True, so very true - except sometimes the audience aint that sedate!

Stephen
That sounds a lot like me talking. Not so much in the use made of, but in the attitude towards. I am beginning to wonder, though, whether there's not room for two digitals with two different attitudes.

Lucky you gong to Wimbledon! I watched Andy on TV in his marathon on Monday evening. He ought to make the future for British tennis improve dramatically.

Blurry photos have their place!