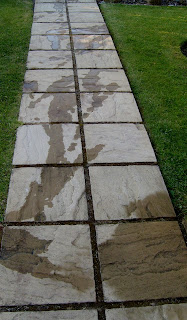 There has been a development since my last post. For last evening's watering session I decided to abandon the cans and use the hi-tech alternative. My hose is a state-of-the-art device boasting a portable reel - the hose equivalent of an outside drive, no less. (Come to think of it, the path is a sort of outside drive, too.) I worked from the path, at all times directing the water away from it, so that the path remained in its pristine state. Brilliant, no? The dramatic revelation occurred at the end of the session, when it came time to reel in the hose. My concentration (such as it is these days) being totally directed towards the reel, its handle and the necessity for the hose to be wound on in a kink-fee condition, I had none to spare for the antics of the nozzle dancing its way up the garden path and dribbling its contents as it did so. True, I could have influenced the choreography by varying the speed or smoothness of the winding, but as I say, I had no attention to spare for this until the job was done. Then, and only then, was I able to assess this latest example of land art. Comparing it with the one displayed in my previous post, I think you will have to agree that it amply demonstrates the truth of the proposition that I have always espoused and kept dear to my heart: that art should always be done by hand. (See, I told you I get carried away.)
Posted by Dave King at 09:12

No, sorry Dave, I must disagree with you, I find this one to be more dynamic and generally superior. Just goes to show there's no accounting for taste!

To disprove your theory Dave - next time try making puddles, jumping in them and photographing the resultant "art" - this sudden "performance" art is very impressive, I must say!

You're going to have the neighbour's talking you know.

I'm afraid I prefer my art to be of a more permanent nature. I can't see the point in spending hours and hours on something like a sand or ice sculpture just to see it vanish in a few hours. And a photograph of said art doesn't really cut it.

I find it all the more fascinating that [a] you experimented [b] we came back to critique...without being critical. :)

I vote for the watering can method. More..earthy. ;)

Well, I can see The Shadow Crab waving goodbye. I used to dream about Him.
And I don't mean to turn it into some watery Rorschach test, I can just see Him.

Dear Dave, I would like to add that not only should always art be done by hand, but also with heart and a brilliant mind!
Keep on creating, I love your posts!
Best wishes,
Rosana

Lucy
I am gobsmacked. Flaggergasted. Amazed that you cannot see what is so clear to me. Today's is inferior! Ergo, hand -produced is superior to technological wizardry. Q.E.D!

The Weaver of Grass
This begins to look like a conspiracy! However, I just might try, just for my own satisfaction, you understand.

Helen
Water angels? How do you make those? What is? Not me, I hope... I did once win a prize for my performance as the fairy godmother in the Sunday School panto, but I've never been an angel!

Jim
You don't know how near the truth you are with that! I've had one knowing look fom the lady two doors away already.

The only solution to that objection is to use paint instead of water, but I think Doreen might object.

hope
You find it fascinating, I find it downright unbelievable! Thanks, though. It restores my faith in human nature.

Titus
I hadn't even thought about the Rorschach Test, but now you mention it...

The Lady in Red
Ah, sadly I can't claim to have used either a heart or a mind - just a hose pipe, but thanks for your observations.

Water angels are like snow angels but to make them you soak yourself, lay on a dry sidewalk and make the familiar snow angel movements .... I guess you don't get much snow in your part of the world. I lived in MN for 24 years, plenty of opportunity for angel making in our family! I am insanely jealous of your Wimbledon jaunt. I toured the UK in October many years ago and begged a worker to let me in for photos. Much to my amazement he said yes .... and I have lovely photos of centre court and the grounds ~ without the players and fans!

But, you see, I see a being, raising his arm in greeting! Doesn't suck at all. (My theory about technology is that it's wonderful when it works.)

You're quite right, Dave, this isn't as impressive as the previous one. I know what you mean about the dancing hose nozzle when rewinding. Should be a law against it!