Hot on the trail! 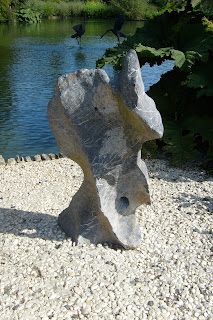 Last month I posted on a visit made to the Royal Horticultural Society's gardens at Wisley, Surrey. The day proved to be the hottest of the year that far. Last week, honouring a long-standing arrangement with Doreen's cousin and a friend of his, we returned to Wisley. Weather-wise it was a re-run of our previous visit. Even hotter, clear blue sky, unbroken sun, etc, etc. There were differences. In August the schools were out and it was very much geared to the interests and needs of children. This time we were greeted by a sculpture trail of 64 sculptures organised by The Surrey Sculpture Society, a Science of Gardening Trail, showing what the Wisley scientists are doing to further the cause of horticulture, and a Global Warming Walk.

I did suggest that perhaps we should try to follow all three at once, see where that would get us. Where it got us was to the early signs of impending nervous breakdowns, so we gave up and just followed our noses.

Here then, the day in a few photographs - emphasis on the sculptures, you will notice. They were of somewhat uneven quality, as they were bound to be. 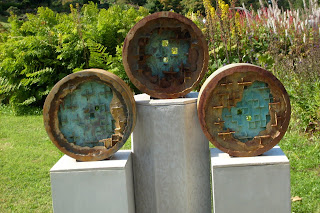 The first two to greet us. The three-eyed monster had something that worked on me, though I could not work out what. 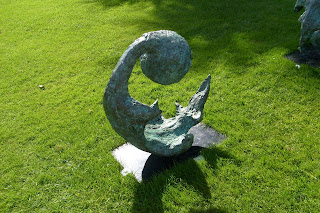 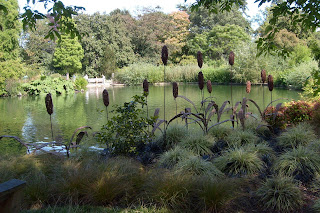 Above, a quiet - and shady! - spot beside the lake where we rested for longer than we really needed to, and just chatted - the best part of the day.

The photograph below shows a sculpture that reminded me very much of The Marini horse and horseman that used to be one of my first stops visiting The Tate. I am not not putting them on a par for quality, though I do confess that I rather liked this long-legged version! 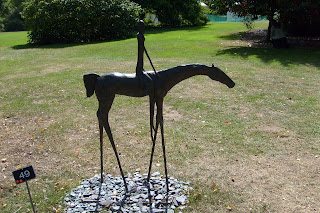 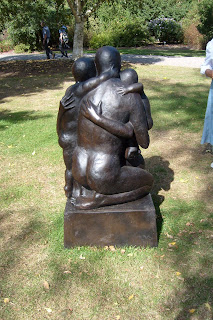 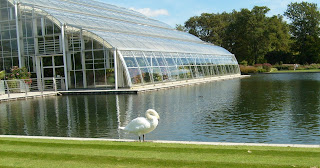 An attempt to right two omissions from that earlier post. Firstly, the new glasshouses. In my previous post I showed something of the plants within, but gave no idea of the houses themselves or their setting.
And below, a view of the rockery which I previously showed from the top looking down - a view which seems to have caused some confusion. This then to put the record straight, what might be called the more normal view - looking up. 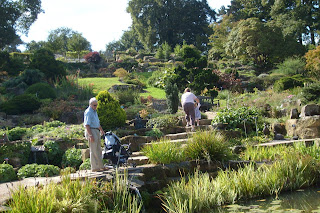 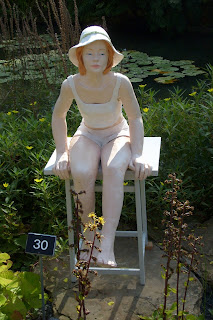 Above, the sculpture of all the sculptures I would have most liked to take home. And below another, longer, view of the rockery. 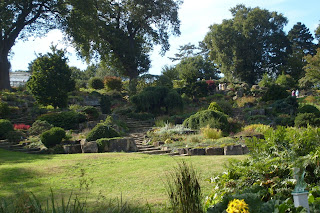 Dave, I had missed the post on Elliot and had to back up first; you were absolutely and marvalously rich in the way you pointed out the structure, the technical details, the clever ways he draws us in the landscape, keeping us on edge the whole time, as we turn and turn on those phrases. Thank you. It has been decades since I read those poems.

Now, on the current post: how lucky can you be to have such beauty around you? I loved your pictures, admired the sculptures, and share your enthusiasm.

Do you know Dave, the quiet spot by the lake with the grasses pleases me best. The reeds with their cigar-shaped flowers heads are the best sculptural exhibit of the lot.

Apart from that, amongst the man-made sculptures I like the second one; it looks like the figure of a child (large head) leaning forward to look at something in its lap.

I miss Wisley; leaving London to live in the depth of the country isn't all it's cracked up to be.

May I add, Dave, that I love to read your posts, but some of them are so long and clever and involved that I don't always have the time to give them the consideration they deserve.

Thanks for taking us with you on this lovely day. I like the sculpture that looks like a fetus - comma shaped, big headed, but what a gorgeous setting for them all! This is in London?

lakeviewer
Thank you so much for those kind words. Glad you enjoyed it. I suspect we all tend to neglect Eliot a little more than we should.

Yes, I couldn't believe we were that lucky: two days right out of the blue - to coin a phrase!

Friko
Sorry, I should have pointed it out - the reeds with their cigar-shaped heads WERE man-made - from cane, I believe. Nevertheless, you were spot-on to say that was the best spot. It's where we spent the most time - even more than at the restaurant.

I do agree with you about the second sculpture - I was only kidding about the one I wanted to take home with me!

Thank you for your generous comments about my posts. You are not the only one to have found them a tad too long. I had been trying to cut them back abit, but rather got carried away writing on Eliot. I used to be a lay preacher, and my sermone were too long also, but having now reached the age of discretion, I do agree that I ought to do something about that. Thanks for the helpful remarks.

Karen
Thanks for the useful comments. Not quite in London, no. Wisley is in Surrey. It is on the A3 between Guildford and Kingston.

Dave-
Looks like a great place. I shall have to spend time when I do finally get to England. The sculpture of the horse and rider I like very much. Reminds me somewhat of Picasso's Don Quixote.

Yep, I love the sculpture of the girl - very striking - but I would also have liked to see the other side of the wee family group.

that's a lovely place. thanks for giving me a glimpse...

I absolutely loved the images and like you was befuddled by the second one. Although the penultimate one, top to bottom, freaked me out. Don't ask me why. Many thanks.

Glad you had a good day. You are obviously the one to follow for decent weather! I like the horse sculpture and the bronze figure cluster.

Beautiful documentation of what appears to be a beautiful spot; the sculptures are intriguing, but like at least one other commentor, I really like the photo taken by the lake. Also quite liked the one of the glass house with a swan in the foreground.

How beautiful these gardens are... thank you for a wonderful, summer-filled tour.

Also, thank you for visiting my blog. :-)

Such a lovely place. And such wonderful sculptures. I especially like the lady with the red hair. It's nice for me to see someone paler than myself for a change!!

It is that horseman that I covet Dave - so elegant and long-legged. Thanks for the Wisley tour - i did enjoy it all.

Dear Dave, I like a lot the horse and the entwined bodies below it, I think they are bronze sculptures, a material I love, I enjoy the "nimbleness" and thinness of the horse in contrast maybe with the "massiveness" of the other.

Yours is a rich and deep pallete of appreciation! Thank you for educating and feeding our finer selves, Dave.

Dear Dave .... you have featured wondeful works of art today. If the Three Eyed Monster came in jewelry form, I would wear it ~ my favorite.

I love the softness of the young girl by the lily pads. There is a whole impressionist feel to her. The three- eyed monster reminded me of a cell division display, where a baby is the result, an expression of fertility. The gardens appear to be planned in a way that creates relaxing places for quiet contemplation. Thank you for the return visit.

Carl
You could do worse than drop in on the pleasures of Wisley. Whenevr you come, and whatever you do, I hope you have a great time.

Jim
Yes, sorry about the group. I chose the rear because the sun and deep shadows made the front difficult.

Shadow
Thanks for commenting

A Cuban in London
Funny, that. I found it freaky when I first saw it. Later we passed it again and I was quite drawn to it. There was (is) something strange about it, but as Jim said, striking too.

Derrick
You would not be wise to follow me too slavisnly for good weather, though it worked these two occasions. The horese and the three-eyed whatsit for me, I think.

John
Thanks for that John. As I said, the highlight of the day was the time we spent beside the lake, so I guess if I had to pick one image it would be that one to remind me of the day. There are many beautiful spots there. Doreen and I have promised ourselves to spend a day there reading.

Vesper
Welcome to my blog and many thanks for taking time to comment.

Pamela Terry and Edward
That's what atrracted me, I didn't spot it before. She's paler than me, too!

The Weaver of Grass
Thanks for stopping by.

Tommaso
Yes, they are bronze, and yes, I agree it is perhaps the finest material for sculpture. Thanks for the comment.

Cloudia
Thanks for being appreciative yourself.

Helen
I think it might weigh you down a bit!

Linda
I hadn't seen that image in the three eyes, but I can now that you have pointed it out. I agree. Thanks for that.

I was born on a lake (well, not literally) and lived there for the first five years of my life. I still have many fond memories of these early years. I've always loved the outdoors, trees, birds, and all. Thanks for th pictures.

Re the Horseman, my favourite - from "Geraint filius Erbin"


Thanks for the tour.

The statue of the girl is wonderful and I would rather like that in my garden. Might scare the neighbours though.

Thanks for sharing this beautiful place. :)

My favorite has got to be the "three-eyed monster" although like you, I'm not sure why.

hi dave - what a wonderful tour of such an alluring place - so gracious of you to take me along! thanks again - loved the all of it!!! jenean

I love the horse sculpture. It's wonderful. The gardens are lovely. Nothing like that in northern Illinois sad to say.

Stephen
Welcome and thanks for stopping by to comment.

Mairi
Thanks for the verse. I did not know it. Good choice.

Madame DeFarge
Anmd what would it do for M DeFarge?

readingsully2
And thanks for commenting.

Conda
Yes, that was my favourite, too. I did wonder if it was partly because it was the first one I saw and it had quite an impact, but no, I think it would have been anyway.

GYPSYWOMAN
And thanks again for stopping by. Always good to know whose been!

Kathy
Welcome to the blog and many thanks for coming along. Hope to hear from you again.

jinksy
That's been getting a lot of votes. Thanks for yours.