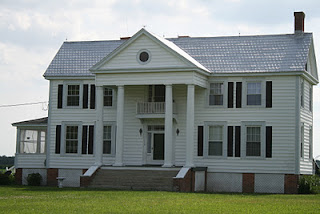 Poets United's" Thursday Think Tank #69 provided for prompt this photograph and the thought that the house might be haunted.

My nightmare house. Night after night
I've dreamed this house. Exactly this.
Always the same house, never the same dream.
Sometimes, as I've approached the house
I've seen it shrink. Right before my eyes,
shrivel down to dolls house size, then
seen it all kick off: grinning faces
peering down at me from every pane of glass.
Sometimes the house has slid away from me,
a pace away for every step I took;
sometimes it shrieked at me, the boards
would move like mouths and scream obscenities.

But it was never real. Imagine then today
I lose my way, am driving down a road I do not know
and there it is: the house I dream about, the very same.
I stop, walk up to it, knock on the door,
it doesn't move or shrink or scream at me.
The door is opened by a lordly looking gent
who welcomes me and clearly is expecting me,
invites me in, asks why I'm late and pours
me out a drink. He knows my tipple to a tee.
He asks about my luggage - and then he disappears,
just vanishes. No puff of smoke, but might as well
have been. Except... he's still there in the mirror,
pouring whiskey at the bar. His image hasn't moved
beyond the movements of his arms and hands.
And then he's back. Comes back the way we recently
came in - and for good measure, steps out of the glass.

One corner of the room is very dark.
I noticed it before. It struck me then as odd
why light from elsewhere doesn't filter there.
I pushed it, I suppose, into the "pending" tray,
but now my mind is working on it, and I see
there is a cage, and in the cage a cockatoo,
some sort of green. My host puts down his glass
and turns towards me, says, "They should be ready for
us now!" And even as he speaks he undergoes
a transformation, morphs into the form of cockatoos,
whilst in its cage, the bird accepts his form.

It lasts a second. Half of that. No more.
So fleeting is it that I half imagine I imagined it.
But no, it happened right enough, the two
exchanged their states, though briefly it is true.
There's proof: the colours are the last particulars
to change. For seconds more, my host is emerald green,
the cockatoo a pin-stripe blue. I don't think
I will wait for "them" to see if they are "ready"!
I make extremely false excuses and let him lead
me to the door. The knocker hammers out a rapid
rat- a - tat tat tat. I look at it and see
it's jerking up and down. That's its "Good-bye" he says
Posted by Dave King at 09:19

The Halloween House. Should be one in every neighborhood this time of year.

This works because it seems real. Well done DK.

bwhahaha...i love haunted house...we used to have a few abandoned houses...and there were so many stories that ran rampant about them...

Oh, this is a chilling tale!

A tale for telling after lights out...

That would be a spooky tale to tell during a noisy thunderstorm in a dark room :-).

Jeez, this is creepy. Creepy good. Yeah, I think we all know a house like that.

I don't think I would have stayed as long as you did! Spooky!

A fine and spooky tale!

ps - you aren't listed on Poets United - is that intentional?

Old Ollie
Glad you thought so. Much appreciated.

Brian
I remember as a child there was a strange old house on our way to school. We made up all sorts of tales...

Mary
Needs good log fire then, and a stormy night?

Jinksy
Ah, that be the time!

thingy
I quite like the tales of people staying overnight for dares or bets.

Lolamouse
Sometimes you just freeze! Thanks.

Mama Zen
Thank you. Glad you liked it.

sunny
Thanks for the kind remarks.

Isabel
Tempting - and no, it isn't intentional. Thanks for the nod.

Oooh...shape-shifting, mysterious door-knockers. Have you been channelling Poe? Very cool!

Blimey, scary and surreal. I can see it as a film. Reminds me of Fellini, somehow.

The stuff of nightmares in an Alice through the looking glass way.