An Instinctive Follower of Fashion

It could be that I am at serious risk of mentioning Grayson Perry on a regular basis. He does seem to me to offer a rare (among art commentators) mixture of the interesting and eminently sensible. This last week he was commenting on the unlikely subject of art and sport. Or, more usually, sport and art. As he rightly (some might say, obviously) pointed out, sporting art, like any other art, can only rise to greatness when done for art's sake.

As a young boy I would stand, fascinated, before a large reproduction of a Victorian painting that hung in my grandparents' hallway. Its title was: "An Evening at the National Sporting Club". The subject: boxing. It depicted the ring, the contestants, the officials and the great and the good who had assembled to watch the sport. But what fascinated me was not the painting itself, but the full sized key hanging beside it which identified those depicted there. As far as I remember, every individual in that crowded arena was given his or her name, rank and number. The painting itself was a typical piece of Victoriana - and definitely done for the sake of neither sport nor art, but for the sake of a certain social snobbery. Nevertheless, it fascinated me; without even knowing it, I was instinctively in tune with the fashion, the zeitgeist even.

Wind on a few years and I have made it to grammar school by the plaque on the skin of my teeth. There I came into contact with an art teacher who was inspirational - as most of the others were not. Furthermore, he had a passion for cycle (road) racing, as did I. Road racing as we know it today was not permitted by law, back then. It was confined to time trialling, and in order to follow or take part in it, one had to be up and about in the (very) wee hours of the morning when the roads were empty of other users. How different today, with The Tour de France about to bring its life and colour to London and the South East for a couple of days. Nearly 200 riders on our roads, bringing with them a bonus of over a £1,000,000! But to return: it came to pass that one afternoon this inspirational art teacher painted for us a brilliant word picture of an attempt on the London to Brighton record, at the conclusion of which account he told us to paint whatever his words had suggested to us. I remember that I painted a yellow circle on a wholly black background. When asked what it was, I explained that the event had taken place at night, so all you could see was his headlight coming towards you. In my defence I would point out that I had used the golden mean to calculate the size and position of the disc of light. The ghosts of Neo-plasticism applauded, I am sure. I was actually very proud of my work. I had not heard of Neo-plasticism back then, though I was about to be introduced to it by that same inspirational teacher. Once again, I was instinctively in step with the prevailing fashion (albeit one slightly on the wane), and still all unaware. Weird. Very worrying! Could this really be the future, I ask myself? 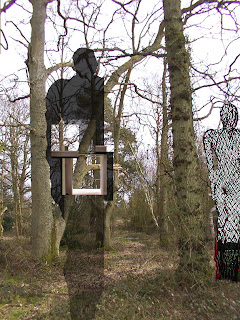