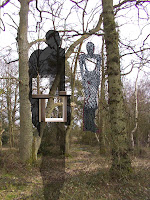 Recently a friend sent me some interesting texts on, and links to, the work of Rob Gonsalves. Totally new to me. "Magic realism" painting of a kind I find intriguing. At the time, it just so happened, I was digitally doodling, playing with ideas that I at once saw reflected in Gonsalves's work. As if that was not enough to stop me in my stride, whilst surfing on the web I then came by accident upon a new (to me) poetic form, The Ghazal (pronounced "guzzle"). It seemed to embody some of the same attributes. Since when I have been largely researching the Ghazal, though what I have unearthed to date is fairly elementary.

The Ghazal comes to us from ancient Persia (a few sources I have found, mention India). It derives from a pre-Islamic, conversational form and consists of a series (no more than a dozen or so, usually) of couplets, mostly end-stopped, strung together by a common rhythm and rhyme scheme, but unconnected by any form of narrative or logical association. Initially, they struck me as being related in the way that a young child at the autistic stage of development relates things and incidents; pointing perhaps to a steaming kettle and saying "Puff, puff mummy!" - though not these days, of course! This freedom from the restraints of subject matter opens up realms of possibilities in love and mystical poetry - and in much more, not least in magic realism and surrealism.

The first couplet (the matla) has a rhyme pattern (kaffiyaa) followed by a short refrain (a word or a phrase, the radij) at the end of each line. Thereafter, in each couplet we find that the first line is free, while the following one ends in the kaffiyaa and the radij. The two lines of a couplet may not even have the same number of feet and may themselves be unrelated. Each couplet may be a compete poem in itself, but thought and/or feeling should leap from one to the next. Connections may be sensed, but are usually not expressable in words.

There is something here that I was experimenting with, trying to capture with my digital doodling, what I have called parallel subject matter. The image reproduced here is the first - and so far only - one to have made it to a presentable stage of development. From it came the idea that was beginning to fascinate me when I encountered, first Gonsalves and then the Ghazal. If all goes well, these will appear, no doubt in some future posting(s). But who knows. Meanwhile, should any reader have, or encounter, any knowledge that would add to or correct anything I have included here, a word to the wise (myself) would be much appreciated.

It has been said that it is easy to write a Ghazal, but exceedingly difficult to write one well - I know, you could say that about, well, almost anything, but whereas free verse, for example, may hide a poet's mediocrity, a ghazal will highlight it. It is perhaps the Bedouin equivalent of the Western World's sonnet.

whoah this weblog is great i really like studying your articles.

Stay up the good work! You already know, a lot
of persons are looking round for this info, you
can aid them greatly.