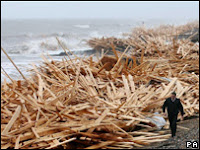 A story has been rumbling on in the media over the past few days concerning thousands of tons of timber that have been washed up on the beaches of southern England. This extraordinary timber slick, is now several feet thick along the tide line and stretches for between eight miles and three counties, depending upon the source of your news. It is the cargo of The Ice Prince which last week sank off the Dorset coast after a heavy storm.

Not so! I have it on the most reliable authority possible, that the timber was towed out to sea in barges hardly pondworthy for the express purpose of being first dumped and then washed ashore to form what is (and will soon be seen to be) a gigantic art installation. The artist behind the venture is as yet unknown, but will doubtless reveal him- or herself in the fullness of time. Meanwhile, the so-called scavangers whom you may have seen making off with huge planks, are in fact performance artists. All in the script and an integral part of the installation you understand. In due course the way in which the media swallowed the hoax, along with the media and public reactions to it when the hoax is revealed will also become part of the story. Word is that these narratives will "sell" the installation to the judges when it is nominated - as, apparently, it will be - for The Turner Prize. There are good precedents: Simon Starling's Shedboatshed for example.
Posted by Dave King at 11:33

Good grief, the imagination, the planning and the cost! As a piece of art, I very much like it. But I worry about environmental impact?

The worst thing is that I'm only 95% sure you're extracting the Michael.

You're both right, Conda to worry about the environmental impact, and Jim to have spotted the Michael-taking dimension.