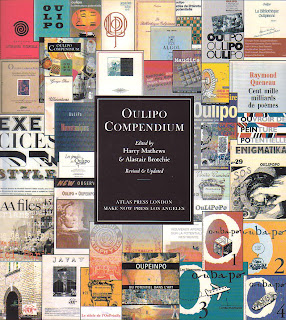 One Christmas, several years ago, I was given as a present a copy of the OULIPO COMPENDIUM. I take it down every once in a longish while, usually when I have just finished a piece of writing or a painting that proved particularly difficult. I relax with it and get a whole new concept of what difficult really means. But for the uninitiated, first some definitions:-


The compendium is described as a resource book. It is a survey of the group and contains analyses of their works, descriptions of their methods, biographies, bibliographies, overviews of groups working in art, comic strips, and even cuisine. Their (its) methods are based largely on ideas of restraint. Restraints can be liberating. For example, when designing compositions in the visual arts, I have found that being given an awkward shape to fill can be a source of inspiration, but the restraints in the Compendium are often too extreme and somewhat phoney, do not arise naturally from the task in hand. The Compendium has something of the character of a puzzle book. The question arises in my mind, as it does when I hear that someone belongs to MENSA, if so intelligent, why bother? Okay, so it's a bit of fun, and why not? Nothing wrong with that. See what you think:-

One of their proudest achievements seems to be the Lipogram, a procedure in which the writer undertakes to ban one vowel from a text. How difficult this is depends, of course, on the length of the text and upon which vowel is to be excluded. One of their members, George Perec, achieved, you would have thought, the ultimate accolade by writing a full length novel, La Disparition without using a single e. Incredibly, they claim that readers do not spot that a vowel is missing unless given some sort of clue beforehand. However, more latterly they have found a detective novel, L'a dans l'baba by Armand Vadlavant (who,presumably, is not a member) in which no vowels other than the letter a were used. This, indeed, is one of their more extreme procedures. They call it Univocalism (sometimes Monovocalism), though it is more typically to be found in short passages. Here, for example, is Shakespeare's To be or not to be: that is the question rendered in univocalism; no vowels but e:-

Be? Never be? Perplexed quest: seek the secret!

Incidentally, the chapter headings in Vadlavant's novel are univocal translations of famous proverbs
George Perec (again) has produced a novel, Les Revenentes, in univocalism, but it is considered a lax production as the title is not spelt correctly: it should be Les Revenantes.

Another Oulipian procedure is to take, say, 10 sonnets (ten are given in the book) and cut each into its 14 constituent lines. (The pages are conveniently arranged and marked with dotted lines.) The rhymes being same for each of the poems, it is possible to replace any line in any sonnet with the corresponding line from any of the others.
(That would make them nonsense rhymes, you say? Well, they've thought of that: they are surrealistic to begin with.) Therefore there are ten possible first lines, for each of which there are ten possible second lines. You will be ahead of me by now. Ditto for the lines 3 through to 14. So: 10 X 10 X 10 X10 X 10 X 10X 10 X 10 X10 X 10 X 10 X 10 X 10 X 10 = 100,000,000,000,000 = one hundred thousand million sonnets! To be honest, I find that remarkable on several count, none of them artistic, of course. Typically Oulipien!

Now something for the artists: plaited pictures. Take two pictures of equal size and preferably with subject matter in common - the example given if a grey figure and a black figure, both sitting. Cut one into strips horizontally and the other vertically. A better result is obtained if the strips are wavy- rather than straight-edged. Now weave them together by passing them over and under each other in the normal way. The results shown in the book look both simple and intriguing. I did try valiantly to produce a quick example (from magazine photographs) for this post. I did really, you would have been proud of me. It is not as fool-proof as it seems. I shall try again, and if successful, show it at a later date.
Posted by Dave King at 12:26

Yes, I can see where you're coming from. As exercises, to stretch a writer, I can see the benefits. It's like you say about restraint being liberating, it sets free a side of the writer that they may rarely access in these anything-goes days.

Your article makes me think of two things, firstly, programming and, secondly, piano playing. When I bought my first computer (a ZX81) I think it has 16 kilobytes of memory – my current one has 160 gigabytes – and to do any real programming with a tiny amount of memory like that you have to get creative. Nowadays programmers can afford to be sloppy because memory simply isn't a problem. And one of the things I hated about learning, or a least trying to learn, the piano was doing scales and exercises. As I writer I never think to do exercises – unless you count things like Scrabble or the odd crossword – and I think I'm a weaker writer because of that. Free verse sounds liberating but I always try and impose some structure on what I write. I feel better about the work when it has a definite shape.

Plaited pictures, what a fascinating idea. Please do try one and post the results, Dave, even if not successful. This remind me, somehow, of crocheting jewelry, another mixed art form.