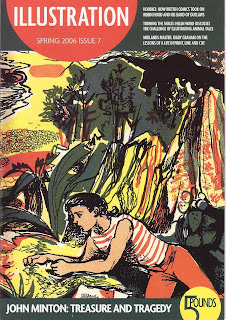 Towards the end of last year, a very good friend lent me four or five back editions of Illustration, a quarterly magazine that I had not met before. As the name suggests, its area of interest is book illustration. I was at once impressed by the quality of its production; the typography, general lay-out and design had all received generous portions of care and attention to detail, as, indeed, they should have in an art periodical, but that is not always the case. The articles are varied, interesting, well written and well researched. For a publication of its type and price (£6 at time of writing) it is excellent, and I would thoroughly recommend it to anyone whose interests lie in that direction. Its stated aims are worth quoting, I think: "The aim of the magazine is simple. We wanted a general magazine about illustration - the artists, the collectors, the collections, the exhibitions, the history, the philosophy and the key events relating to this subject. We wanted to discuss the work of great artists from the past as well as new graduates currently coming out of college. We wanted to explore children’s book illustrators alongside those who work on adult novels and classics - or even political manifestos and train timetables. We wanted to consider the humorous, the serious, the sinister and the surreal".

It was nostalgia, I have no doubt, that directed my attention first to the Spring 2006 edition featuring John Minton. I was at art school in the early fifties, studying for a N.D.D. (National Diploma in Design) in book illustration. I would rather have been studying painting, if the truth be known, but it was not to be, and book illustration was a compromise. Painting was on the syllabus, of course, and sculpture, and there were evening classes where I could top-up, but in the illustration sessions I was probably more interested in what the others were doing than in what I was producing. And what the others were mostly doing was polishing their credentials as up-and-coming Mintons, for Minton's star was at its zenith just then. (He was to prove himself something of a shooting star in the very best Bohemian tradition, when, following an unhappy childhood, he would plunged - or find himself plunged - into a life of booze and drugs, resulting in a tragic and untimely death.) It seems incredible that in a life so short and so filled with distraction, he managed to leave so much, but being force-fed Minton at every turn, to the point where his way of representing lush, tropical vegetation was de rigueur, as, indeed, were Samuel Palmer moons and trees with crescent-shaped branches, I was to that extent put off the whole subject. It was all very tight and formulaic and not at all to my taste. It was not until much later in life that I came to see his achievements in a somewhat different light. Had I not come to that realisation, Illustration would certainly have steered me towards it. I do still find the paintings, as I found them then, lacking in substance. He strikes me as an illustrator's painter rather than a painter's illustrator. The illustrations to Kay Dick's novel An Affair of Love for example, and the rather lovely (slightly Lowryish?) paintings to accompany an article on St Helens for Future magazine are both represented in Illustrationby excellent reproductions, as are my own personal favourites, the delightful images for The Snail that Climbed the Eiffel Tower.

Minton : The Tate Collection
Posted by Dave King at 08:58