I have decided to publish my only long poem, here on my blog. Big deal! I hear you say, and for me it is, if only because until very recently I did not think I ever would. What brought about the change of mind, I have no idea. However, I am not publishing it in one go, but a "page" at a time, in serial fashion. An earlier version was on my web site until recently. Indeed, "Short Official Guide to Ancestral Home" has had been around in one form or another for quite a while. It began as the germ of an idea while on a guided tour of an ancestral house. Our guide was excellent in that he was lucid, witty and patient with questioners. He knew his material thoroughly and had a fund of anecdotes, each of which was associated, in his mind at least, with a particular room, and he kept the group interested and wholly amused. Occasionally he would bring from his store a colourful character we had not met before and would not hear of again, but mostly it would be past owners or residents already introduced to us, who who would be the subjects of some new anecdote. However, because the stories were linked to the various rooms, they were in no chronological order, so, for example, I would find myself wondering whether the "Captain George" of the present story was the "Captain George" who had escaped ignominiously through the kitchen window, or would that have beent his father? And did Fanny's wedding come before or after the accidental shooting of the Viscount? Would Lad May have known about the twins when she wrote the letter, or did the party take place at a later date? And so on. In other words, the details fascinated, but the broad picture escaped me. Sir Frank was obviously in fine fettle when he set sail, and in a bad way at the funeral, but which was the earlier occasion? Had his condition made good progress or had it deteriorated? I remembered having similar difficulties getting the broad picture from my school history lessons, but on the guided tour the ambiguity of it all struck me as a metaphor for society. Civilisation even. Indeed, it occurred to me that the house might itself be a metaphor for civilization. Taking that a step further, some of the house's major players began to assume roles corresponding to those of various figures from history, some historical, some mythical.

I should say that today I can recall almost nothing of the house itself or of its many occupants over the years. None of them appear in the poem - as far as I am aware! The slowly developing imagery of the poem has obliterated all the images of its source. I should also say that it would probably be unhelpful to look for symbols of the usual kind in the poem. Symbols are by definition constant. They stand for what they stand for. In the poem, though, these symbols, like those in the poem's meeting between Caedmon and The Abbess Hilda, are subject to change. The house, for example, may stand for different things at different times.

The drawings (not illustrations in the true sense) are by my grandchildren. 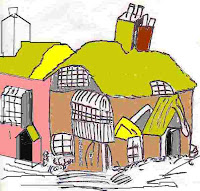 Preface to the second edition

In houses such as this
was history shaped, were
revolutions planned. In rooms
like these great men and women
honed their special skills, found
passions ready-made -
and not just ready-made: arranged
like books on shelves for easy reference
and, ultimately: choice. All that are here:
dust, furniture, fine paintings speak
of other days and other ways; of past
explorers, knights to the Crusades,
missionaries of many faiths and creeds
(or none), exploiters, slavers,
traders, smugglers and murderers,
fools and vagabonds; all grew
within these walls, and then set forth
to work their wonders or disasters.
Inventors, torturers and doctors,
men of science, dancers
and romancers, artists,
artisans and engineers,
politicians, parasites and public
men of all descriptions,
bishops, generals and thieves,
all in their day
and in their various ways
lived here.


Walking sticks (unless you are infirm)
and brollies, bags (not handbags),
cameras and overcoats, mobile phones
and parcels, food and drink
must be surrendered in the Entrance Hall.
Whilst doing so, please note
(for we are very proud of them)
the geometric patterns in the floor;
intricate, they are
of Portland stone and Devil's Black.
Beyond (majestic is the only word),
the cantilevered staircase
rises to the upper rooms.
Staircase and the bedrooms may be viewed
on Tuesday afternoons, September
through to January, when
her Ladyship goes south
and you are free
to take the Long Tour, one
we have designed
especially for connoisseurs. Today
should whet your appetite. The door
beyond the staircase is your
open sesame, not just
to our world, but to many.
Posted by Dave King at 11:05