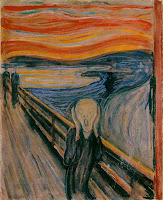 The news that Edvard Munch's Scream, stolen in a dramatic Heist, you may remember, and then recovered in a damaged condition, is beyond repair came as a bit of a surprise, to say the least. After all, they have been restoring it now for four years. You might have thought that they would have realised a little earlier that the cause was hopeless. But then, reading on a bit, it transpires that the scratches to the paint surface and the areas of flaking have, in fact, been successfully dealt with. All that remains is some water damage, as I understand it, a loss of shine in an area of dark, loose brushmarks, well away from the central focus of the picture. This cannot be treated as the painting is on cardboard stuck to board. Had it been on canvas, the moisture would have been sucked out from the rear, but as it is, there is nothing that can be done.

Okay, so we have a painting whose main areas have been fully restored, but there is a water mark low down in an unimportant area, one to which Munch certainly did not give much care or attention. It's a great shame, but perhaps not the end of the world for the owners. So what's all the fuss about? Well, reading on still further, we discover that as a result of that unremovable mark, the paining has, in all probability, gained appreciably in value - and will certainly be an even greater crowd-drawer than it was before. Now am I being overly cynical here? Are they really unable to do anything about a mere water mark, these experts in their temperature- and humidty-controlled vault, behind their fingerprint-operated locked doors, with high-tech equipment and their genuinely jaw-dropping skills? After all, this is the era in which it has been known for conservators to remove the paint film, restore the canvas and then replace the original paint. Could they really not prise apart the board and the cardboard? And remember, it is not the only version of The Scream, but it has become - and even more so because of the mark - the most famous one, the one with star quality, the must-see one.

To a point I agree with the museum authorities that the damage has now become part of the painting, but are there any other cynics out there?
Posted by Dave King at 08:55

Me, me, me - I'm cynical. God, am I cynical. I can do sceptical on a good day but cynicism really has the edge for me.

I agree totally with you. I don't see what the fuss is but then, although a lover of art, I'm not one who gets too excited about seeing them live. I know, I'm a Philistine. An exception to this was when the Dalí exhibition came to Edinburgh a few years ago. I did make the trip to see them and, well, I was disappointed. Most of them were so ruddy small and the lighting could have been better. At least with a book (I have a huge volume of Dalí's work) I can scrutinise it at my leisure and in the comfort of my armchair.

Yes, The Scream has become a kind of icon but, as you say, it's not as if it's the only one in existence. So it's a little duller and a bit damp around the edges. So what. I tend to agree with you that the damage has become a part of the mystique which surrounds the painting.

I wonder what 'beyond repair' means in this context? I mean, if it were a car, you wouldn't be able to drive it but it sounds like the painting is still pretty-much there to be enjoyed.

Is there a bit of elitism at work wherein the 'highbrows' who are the only ones who can really 'appreciate' the Art will have their experience of it tarnished by the damage done to it?

I clicked on your image of the painting and was rewarded with a nice detailed enlargement. It looks like Munch chucked a bit of seagull-poop at the lower right end of the picture for effect - I wonder how much the damage would have compromised *his* view of the work?

Thanks for the feedback Jim, You don't sound like a philistine. Not enough of the old tub-thumping. I, too, tend to find that for the most part I can survive on a diet of good reproductions, modern technology having raised the quality almost to match the original - though purists will be baying for my blood for that remark. One thing reproductions don't give, though, is the aspect you mention: scale. I have found that I have had to completely revise my assessment of a work when confronted with its size.

Hi Ken, and thanks.

I think "beyond repair" simply meant they couldn't fix it, but I think you put your finger on the issue by saying that it is still pretty much there to be enjoyed.

I see what you mean by the seagull poop. I believe the "damaged" piece is just to the left of that, the lower tatters of the figure, if I can put it that way.

And just to put the whole thing into perspective: I believe Munch once drove a nail through the top of the painting in order to hang it on the wall!

My dad was an artist and sometimes the "highbrows" would get to him. He had a customer once say, about a painting of his, "How does it read?" To which he responded: "It's not a book, lady, it's a painting." Lost that customer.

And Jim, I was disappointed when I first saw the "real" Mona Lisa--it too isn't very big. Ah, the trouble with icons.

Conda,
Thanks for that. I once had an art lecturer who would stand his students in front of some huge masterpiece and then contemplate it for a while as though meditating, before stepping forward pointing perhaps to some insignificant brush mark in a bottom corner somewhere, and saying "Artistic, isn't it?" We, of course, would enthuse in agreement!

Count me in as cynic on this one, Dave. Good combination of post and comments here.

Thanks Dick, nice to know there are a few of us around.