My earlier post on Primitivism in art (to which this is very much a follow-up) brought various comments, questions and suggestions, both as comments and by email, on the relationships between the various branches of Primitivism - if, indeed, that is what they are, for there seems to be no finality as to what exactly each is and where it lies in relation to the others. There is instead, a great deal of overlap and imprecision. So, back to basics: my Encarta World Dictionary defines Primitivism as "1), The state of being primitive or the qualities associated with being primitive. 2), (Arts) Simplicity or Naïvety of style. 3) Anti modernism: the belief that less technically dependent cultures and ways of living are inherently superior to those more technically dependent." The first definition sent me to look up the definition of Primitive. There are nine, ranging from "first forms of... or early forms of...", through "simple", "original", "natural", "untrained", "from a culture with simple technology", "early Medieval", to "in an original state". Not much help there, I think, for someone looking to see how and where Primitive art, Primitivism, Naïve art, Folk art, Tribal art and Outsider art (the last intriguingly thrown into the melting pot by Jim ) might dovetail together. Whatever your views on any or all of them, you could find some confirmation there.

So let's take another tack. In 1984 The New York Museum of Modern Art moved into newly expanded premises and celebrated with a now famous exhibition: Primitivism in Twentieth Century Art: Affinity of the Tribal and the Modern. I had thought, when composing my previous post, that I was being somewhat broad in my definition of Primitivism, but this throws it even more widely open, for the sub-title of the exhibition was: The Influence of "Uncivilized" Art on the Twentieth Century.(My quotes.) Wider, but also more profound, more basic, for the exhibits were paired, one Primitive with one modern, all the way through the exhibition, but in ways that would make it difficult to believe that between the paired artists there could have been any direct influence. For example, Portrait of Madame Matisse by her Husband, was paired with a mask from the Gabon. In other words, what the visitors were being asked to realize for themselves was an "affinity", the idea that something was going on in the one which was also going on in the other. (The Gabon mask shown here is not the actual one from the exhibition, which I was unable to trace, but hopefully it makes the point.) 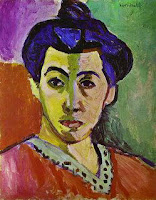 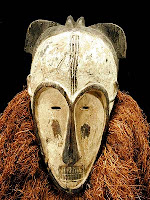 But the history of Primitivism is as littered with misunderstandings as a road in some "Bomb Alley" with potholes. African masks have been held aloft as proof of a belief in spirits, though the purpose of the masks in question, we now know, was to scare the enemy in battle. (There are, of course, a wide range of masks for a wide range of purposes.) Picasso 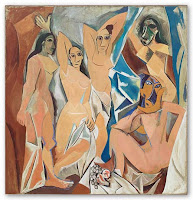 confessed that African art both drew him and repelled him. Artists who were consciously influenced by what they took to be the "meaning" of a Primitive artifact could not tell the difference between African and Oceanic examples. They were all the same to them. The interest was in them almost as "found" objects, and not in the cultures from which they had come. Until recently we in the West were unaware of the fact of African art having its own masters, schools and influences in exactly the same way as our own art. Similarly, it was late in the day before we realized that Aboriginal Art had gone through its periods of changing styles, exactly like ours.

Maybe I chose an elliptical route to get here, but we are at the point of coming to realize that there is a definition of the word Primitivism that is missing from my Encarta World Dictionary (though some might argue that it is subsumed under the third definition). The missing definition would go something like: "Primitivism" is an artistic movement which idealizes whatever is thought to be simple or primitive above that which is seen as having a degree of sophistication." The first five words form the core of the definition, the rest could be argued about. The inspiration for Primitivism came from the eighteenth century philosopher Jean-Jacques Rousseau (not to be confused with the painter Henri Rousseau)

who was at pains to point out what eighteenth century culture most lacked: nature, passion, emotion, instinct and mysticism.

Primitivism, then, is the trunk, from which emerge the various branches we have mentioned: Naïve Art, Folk Art, Tribal art (this last perhaps distinguishable from Folk art only by the preponderance of body art.) and Outsider art. And if Primitivism is the trunk, then Primitive art is the soil from which it comes. Primitive art includes the art of all prehistoric peoples and those tribes and races that are still technically unsophisticated. Aboriginal and Maori art, for example. African art and the art Oceania. That much, I think, is indisputable. This next bit is for the purist - which we all are from time to time, though few consistently. My previous post on the subject was maybe chewed at a bit by that fiend pragmatism, whom I let off the leash once or twice for the sake of a quiet life.

These then for the pure of heart:-
Naïve Art or Art Naif
The term presupposes the existence of an academy or a "canon" of work, different from it. It could not, therefore, properly be applied to true Primitive Art, such as Aboriginal Art. We are speaking of the work of self-taught artists with no formal training, but often obsessively dedicated to making art. The appearnace of the works is usually quite distinctive, but may be deceptive: typically they will have the appearance of a child-like innocence, though the artist may have borrowed his visual vocabulary, composition and techniques from old masters and others. Nevertheless, there will be an awkwardness that is quite genuine and stems from a lack of accomplishment with drawing and perspective. The result may be a vision that is refreshingly "different". However, the genre has become so popular, not to say, financially rewarding, that not all is what it seems. There is a great deal of "pseudo Naïve" or "faux Naïve" art about that is imitative rather than original. And, as noted in my earlier post, the genuine Naïve artist is often termed Primitive, Henri Rousseau, being a prime example. We, though, are being purist, so I will say no more about such goings-on! To recap my earlier post, other characteristics of Naïve Art are bright, even gaudy, colours, intricate detail and flat space.

Folk Art is often confused with Naïve art, but is characterized by traditional decoration or motifs and form that are specific to its culture. Sadly it is often found in corrupted form, the negative influence of tourism.

Outsider Art is a new kid on the block as the phrase didn't exist until 1972, when it was coined by Roger Cardinal, the critic, as a pseudonym for "Brut art", which translates literally as "Raw" art or "Rough" art. It refers to outside constructions and artifacts made by individuals with not training, and who do not see themselves as artists. It is art from outside the world of art.

End of my purist phase, back to what happens in the real world. What happens is that a group of artists come together or come to be considered together because of a commonality in what they are attempting, some common purpose to their philosophies or similarities in style or technique. In time, if they become successful, others, with some points in common, will be added to the group. Imperceptibly, almost, the definition loosens and may end as little more than a similarity of appearance. It happened to The Impressionists. The term was coined by the critic Louis Leroy of Monet's "Impression Sunrise", and seemed to him to fit the loose, "unfinished" style they favoured. The characteristics of The Impressionists were: Brush strokes that were rapidly applied, were broken, short and, above all, visible; colours that were laid side-by-side or applied wet-on-wet and allowed to mix on the canvas; no use of transparent glazes, of colours built gradually from "ground-up"; en plein air painting with an emphasis on natural light. Today, depending on which authority you consult, you might find any of the following, listed as one of the Impressionists: Pierre-Auguste Renoir, Edgar Degas, Paul Cezanne, Paul Gauguin, Vincent van Gogh - and even the sculptor Auguste Rodin (for his broken, "impressionistic" surfaces, I suppose).

Now a few examples of Primitivism and the labels I have found attached to them after the briefest of trawls on the web.

Images are from Wikipedia
Posted by Dave King at 11:33