News of the death of Robert Rauschenberg (1925 - 2008) is a reminder of yet one more artist who has perhaps not received his just deserts from what should have been a grateful world.

When Marcel Duchamp threw down the gauntlet in the shape of a urinal and then just left the idea lying around to worry us while he went off to play with other things, this was the man who picked it up and ran with it in a variety of new directions - so many, and so quickly that by the time the critics of the day and others had realised the sleight of hand, it was too late, the ball was out of sight.

Rauschenberg was perhaps one of those artists who failed to get the acclaim he merited (in my opinion) because he could not be pigeon-holed. It is said that he did for painting what Walt Whitman did for poetry: he opened it up. Before Tracey Emin was, he had incorporated a quilt sheet and pillow from his bed in a montage, and had soaked them with paint to represent blood; ere Damien Hirst had taken the stage he had affixed a stuffed bald eagle to a canvas ("Canyon") and placed a stuffed goat encircled by a tyre above a painted panel. It was he who first painted completely white canvases, and then went on to paint completely black ones. It is said that the composer John Cage was inspired by one of his white canvases to write his silent work, (4' 33"). Generations of artists have drawn water from the wells he dug, yet beyond the art world he is hardly known. 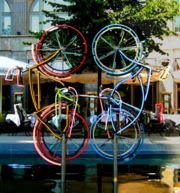 He argued that painting is made more like the real world if it is made out of the real world. “I really feel sorry for people who think things like soap dishes or mirrors or Coke bottles are ugly,” he once said, “because they’re surrounded by things like that all day long, and it must make them miserable.” He embraced Abstract Expressionism, Pop Art (though some critics will deny that he was ever a pop artist), performance art and in many ways became midwife to the Concept Art that Duchamp had sired. He was never afraid of being thought banal and was thus able to respond to the everyday and to other art forms. He learnt from Dadaism how to juxtapose items in playful, humorous ways.

It maybe that he is better-known and appreciated by our friends on the other side of the pond. I don't know, but it would be good to think so - or are prophets still not honoured in their own countries?

(The second image above is of "Riding Bikes")
Posted by Dave King at 10:41

I love the description of Robert Rauschenberg's Monogram: mixed mediums with taxidermy goat, rubber tire and tennis ball. It's probably the work he will be most remembered for. It's certainly the work that jumps immediately to mind when I think about him. I saw a documentary about him a while ago where he was working on this huge installation. He seemed like an interesting guy but on the whole his style is a bit too messy for my tastes – the paint on the goat's face has always bothered me.

Yes, I find him a very interesting guy. Some of his styles are a bit messy, but he has so many of them. I do rather go for the Monogram description, though.

Thanks for a post about a fascinating artist. I especially love how he refused to be pigeonholed and embraced whatever interested him. The mark of a true artist (and writers have their own form of that, I do believe).

Thanks for dropping by. Not only refused the pigeonholes, but didn't care about being thought banal - that's what really impressed me, because unlike some who seem to have the same attitude, he actually wasn't banal!