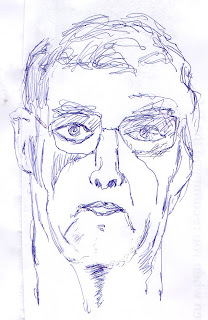 Back in February I re-posted a much older write-up of an exhibition I had seen of the later work of Victor Pasmore. My post was called With Eyes Tight Shut, for the images exhibited were a selection of those seen and painted by Pasmore with his eyes closed. I had known Pasmore's work many years before when he had been a very different painter and I was immensely impressed with these later works.

Maybe ten years or so before that I had developed a tremor of the arms. It is nothing nasty, a genetic thing which my father suffered from and which has begun to show itself in my brother. It was and is more nuisance than sinister. Among other inconveniences it greatly interferes with my ability to draw. After seeing the Pasmore exhibition I experimented for a while with drawings and paintings of the images that appear when I close my eyes, and I blogged about this for I was interested in comparing my own experiences with those of others. Not surprisingly perhaps, I found that there seemed to be very little conformity in the images, each person's images were as individual to them as their dreams. At the same time I flirted with a way of drawing that I had heard about in my student days, but not tried, a method that involves not looking. But other issues overtook me and I did not pursue either interest for long. Recently, I decide to try this method of drawing. It was not a serious attempt. I tried it out on a scrap of paper just before going to bed - a quiet time when I would normally have been reading or maybe watching a T.V. program I had recorded.

Then came one of those synchronicity thingies when The Guardian newspaper, produced a booklet on How to Draw which was given away with the Saturday edition of the paper. I almost did not look at it, assuming that it would consist of those cringe-making formulas for drawing horses, trees, flowers etc. A this-is-how-you-do-it treatise. Fortunately though, I did look at it - and it wasn't that at all. In fact, there was a small feast of excellent articles by established artists (innovative art tutors the book called them) and students telling - amongst other things - how they go about their drawin gs and why they do it that particular way. And yes, among these was the draw-but-don't-look idea. Indeed, there were several versions of it.

One thought I had nursed when experimenting with this was that maybe it would give my drawings a bit more life and freedom of line. It didn't - or maybe I should say that it hasn't yet, for it is early days. What it did do, though, incredibly, was circumvent the tremor. The drawings made by this method show no sign of the shaky hand syndrome that has become so noticeable in my drawings generally, to such an extent that I had almost stopped making them. This took on added interest when I read that when Chenai - one of the model students - tried out the technique his hand became exceedingly shaky. He did, though, insist that you should hold the pencil out at arm's length to draw, which I have not done.

The method, then, is simply this: that you do not look at the paper on which you are making your marks. You look continually at the subject and nothing else. I have now modified that slightly but importantly - for me, at any rate, it has proved important. I do not look at the drawing whilst I am making a mark. I will look occasionally to reposition the pen or pencil. So for example, having just finished drawing the right eye I will look at the paper for the purpose of transferring the pen to the other eye, but then look away before beginning to draw. An alternative aid I have introduced is that when beginning, say, an ear, I may use a finger of the non-drawing hand to mark the start point, so that I can return to it if need be.

The self portrait shown here is my first two attempt using the method. I used the method in its pure form - no looking whatsoever. It is rather crude, to say the least. There is none of the liveliness of line I had been hoping for, and the shape of the head is not correct, which indicates to me that my body image is not what it was - not surprisingly perhaps, for the body image is yet one more thing that deteriorates with age. (In this connection, what I mean by body image is the awareness of the position of the individual body parts in space and their relationship to each other. Can you, for example, touch finger tips behind your back at the first attempt?) So, is not a good likeness and it is not good from a drawing point of view, as a piece of art. Nevertheless, it is, as I say, early days, and I do think the method has possibilities.
Posted by Dave King at 12:00

I love the portrait and I really love the enthusiasm you have for little experiments like this! My art tutor says that you miss most of your subject if you are not continually staring at it. He is forever getting us to do exercises where we draw without looking at our work. This is especially important for plein air artists who run the risk of loosing interesting cloud formations and other movements. Thank you for the great post today, Dave.

wonderful. Keep at it.

Impressive - but you can see. What I find hard to grasp is this guy who has been blind since birth. Watch the video and you tell me.

Interesting Dave. I cannot draw at all. I went on a drawing course. The tutor, Peter Hibbard (a student of Henry Moore's) told us to draw a line and then draw a circle. We did this and then he said he didn't know why we had come on the course because we could draw. In the stunned silence which followed he said - you can draw - what you are not very good at is looking. Drawing is 2 percent putting pencil to paper and ninety eight percent looking. I have never forgotten that.

Interesting method. In your case, your self portrait has turned out beautifully rich and distinctive. Is this a method beginners can try?

I find it particulary fascinating that your tremors ceased with this technique while another student's began. An interesting case for neuroanatomy. I think your drawing is quite well done for not looking.

Your musings about your self portrait just go to show that perception is all. I find your portrait well executed. Maybe you don't meet your own standards, but that doesn't mean it isn't good!

Very good, keep at it!

What a fascinating dwscription, Dave of creativity, of finding new art forms. It reminds me of freefall writing, which I've mentioned elsewhere, the business of not looking at the screen as you type, or looking back over what you've written. Though this sounds far more difficult. Good on you. i also appreciate your references to the aging process and ways of struggling with it, rather than letting it take over.

Interesting experiment, Dave.I can't draw but will give it a go.If my photography is not going too well I often stop looking through the viewfinder but take 'freehand' what I see at waist level or ground level.Similar yet totally different?

This technique promises much for you beyond "mere" drawing I think.

I would consider your drawing to be a masterpiece given the method. Having just given it a quick try, I can confirm that my reputation as a non-drawer is safe!

What a wonderful reminder of what seeing with your other senses can do. Great post, Dave. I am always really inspired by what you post - other ways of seeing.

To All
Hi to everyone and thanks especially to those who have left comments during my prolonged (it seems to me!) absence. I hope to be posting on that before long.
Interesting comments here from Linda and Jim (whose link I shall definitely investigate: thanks for that Jim). I agree with Weaver's teacher. I do think pretty well evryone can draw, once they have looked and seen it. Drawing is a valuable tool for teaching the art of looking. Never mind the result.
Ronda picks up a point that has fascinated me. I have no answers, though.
Elisabeth's free fall writing sounds more difficult to me than the drawing option.
Totalfeckineejit's freehand photography sounds interesting.
My thanks to all, your efforts are much appreciated.

Took a university class in "Drawing from the Right Side of the Brain" some years back. Consisted mainly of staring at subject and seeing spaces and shadows rather than an object, often not looking at the paper. I did a wonderful drawing of my own hand that way. Your self-portrait has a lot of character. Maybe it's not a true image of you in the mirror, but of yourself as others see you?

I just found your blog because I just saw you are following mine! Thank you. But I saw the contour drawing and it made me think... I teach "art for fun" to some women friends who think they cannot draw. I charge for every time they say they "did it wrong." But we start with the contour drawing every time. It releases something...

Anyway, thank you so much for following my erratic blog. I look forward to exploring more here!

fascinating kind of engaging at a level of touch trust... and a good--not to mention brave --example of your early labours.