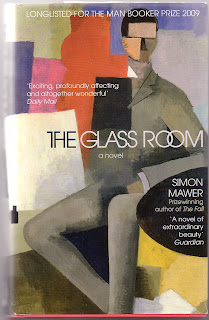 When Hilary Mantel's Wolf Hall won this year's Booker Prize, by all accounts so convincingly and deservedly (for I have not yet read it, though I am about to put that right), there arose a persistent rumour that the judges had unofficially placed Simon Mawer's Glass Room in second place. It caused some commentators to raise again the question of whether it wouldn't be better in future to split the prize money in to three and award first, second and third prizes. (And interestingly enough, I was reading only a couple of days ago that the French equivalent to our Booker awards the winner a cheque for a measly ten euro. The award is no less coveted, it seems.)

It so happens that I had The Glass Room in my to read pile and took it with me recently for my holiday reading. It's a cliche I know, but I genuinely could not put it down - not for long at any rate.

The focus for the story is pre-war Czechoslovakia, though it begins in Venice where Liesel and Viktor Landauer (of Landauer car fame and wealth) are on honeymoon and where they meet and become friendly with a stranger by the name of von Abt, who proves to be an internationally regarded architect. Viktor suggests that von Abt might like to design a house for them. The suggestion excites von Abt and both men become enthused by his idea of a house of the future. "Ever since man came out of the cave he has been building caves around him, he cried. Building caves! But I wish to take man out of the cave and float him in the air. I wish to give him a glass space to inhabit."

Glass space, Glassraum. It was the first time Liesel had heard the expression.. 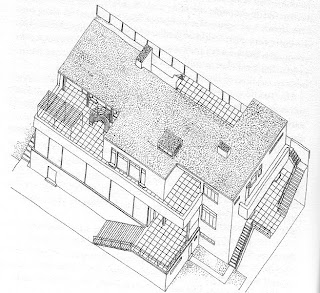 As you might have guessed, the house becomes the hub of the story. There was such a house, though how much of the story is based upon the people and events associated with it, is difficult to guess. In the story the house becomes a metaphor, indeed a series of shifting metaphors. At first it stands for the optimism with which the story's three main protagonists regard the future. The two men particularly, have no doubt that the new style of house will breed a new way of thinking and living. The house will prove to be Abt's great masterpiece with travertine floors and an internal wall of onyx in a room composed entirely of glass. In such a house the way a man thinks and lives will become more open and transparent, more honest, more worthy.

By the time the plans arrive Liesel is pregnant. Viktor explains them to his wife: "He wants to build a steel frame. Apparently there will be no load-bearing walls at all, just the whole thing hung on a steel frame. And where the uprights pass through the interior he is proposing to clad them in chrome. Gladzsend, he calls it. Shining. Hard steel rendered as translucent as water." Viktor pulls a letter from his pocket and reads: "Steel will be as translucent as water. Light will be as solid as walls and walls as transparent as air." But before the baby is born Viktor is having an affair with a woman called Kata whom he met by chance in a park, she asking him for a light.

So where does that leave the great metaphor which is the house? There is irony now in talk of honesty, transparency and openness. Over the course of the story the house will become a metaphor for other concepts (tranquility, illusion, dream), for these are the dark days before W.W.II, and although Liesel is Aryan, Viktor is Jewish and they have to flee, leaving the house which has come to mean so much to them. Before that moment arrives however, the pressure of external events causes Kata to be taken on to look after the young child, much against the wishes of Viktor who has considerable anxieties about the move. However, Viktor arranging papers for her to allow her to accompany them, initially to Switzerland. Sadly, she does not make it across the border.

There follows a confused period in which the house is first confiscated and then changes hands and purpose several times. For a while the Nazis have it for their own particular brand of research - into racial characteristics. It becomes a clinic and a refuge for handicapped children. Viktor's one time chauffeur becomes a self-appointed janitor with eyes on the black market. Then comes the cold war and, eventually, the collapse of Communism clearing the way for the return of the family - but a very changed family. Doctor Tomas, who had run the clinic, had had a firm belief that the past is an illusion. He had also shared (unofficially) the glass room with a girl called Zdenka, letting her hold her dance classes there, in return for which she would dance for him, and for him alone, each evening. Tomas had found it very disturbing that the Glass Room possessed a past, that it had not always been this sterile gymnasium, this fish tank in which Zdenka danced for him, this room of glass and quiet." Dr Tomas had maintained that there is no such thing as time. Past and future are both illusions. There is only a continuous present.

The author includes an Afterword, which for me threw further light on the metaphor and on his thinking, though I think I would have preferred to read it first. I am therefore including it, almost entire. He writes:-

The title of this book, The Glass Room, needs some explanation.It is, as is clear, a translation of the original German - Der Glasraum. Raum is, of course, "room". Yet this is not the room of English, the Zimmer of our holidays, with double bed, wardrobe and writing desk beneath a print of some precipitous Alpine valley. Within the confines of the Germanic "room" there is room for so much more. Raum is an expansive word. It is spacious, vague, precise, conceptual, literal, all those things. From the capacity of the coffee cup in one's hand, to the room one is sitting in to sip from it, to the district of the city in which the cafe itself stands, to the very void above our heads, outer space, der Weltraum. There is room to move in raum.

So: The Glass Space, perhaps; or The Glass Volume; or The Glass Zone. whichever way you please. Poetry is what is lost in translation, as Robert Frost so memorably said. So we do our best with this sorry and thankless task, aware that we will be condemned for trying and condemned for not trying. Take it as you please: The Glass Room; der Glasraum.

So have I any quibbles, regrets, carping comments? Well, certainly nothing that is more than nit-picking. There was not much in the way of character development that I could see, and that is something I look for in a novel, but it is something for which this particular story offers very little in the way of opportunity. People disappear for years and come back changed, it is true, but the change occurs off stage, not in front of the reader. There is, though, one exception: you might say that the house, der Glasraum, is the chief protagonist, and we do watch its character change and develop considerably.
Posted by Dave King at 12:44

In your wonderful synopsis, I am inspired to root out the book. I wish I were younger and you were my tutor.

I'm absolutely intrigued. I tend not to follow the book awards, so I hadn't heard of this, but I'm always intrested to hear of something so unique and fascinating.

I have this book on order at the library Dick, having read a crit on it somewhere. It certainly sounds fascinating.
A little while ago you recommended Adam Thorpe's Ulverton. I looked for it in the library and it wasn't there so I ordered it. In the meantime I took out his next novel "The Rules of Perspective". It was absolutely excellent - and again I couldn't wait to get stuck into it. If you haven't yet read it I do recommend it to you.

Thank you David, for this review, for the opportunity to become informed on such a piece.

Great review. I love the rich metaphor of 'raum' or anything that represents the space our minds inhabit. I believe that any matter, especially one's body, serves as the medium for the workings out of constructs we encounter in this 'physical therapy' called Life (accounts for a lot of contraction and not just in muscles - resistance to 'what is' - I've seen this first-hand as a massage therapist).

Your sonopsis betrays erudition that I respect!

You're right Dave, so much gets lost in translation.

This book sounds fascinating and I'm intrigued by the idea of someone who lives with the illusion that past and future are merely illusions.

As far as I'm concerned, the future is unknown but 'the past is a foreign country', which we ignore at our peril.

Pardon the mixed and unacknowledged quotes. How fast they become truisms.

I would say, at the risk of being pedantic, that with a title like 'The Glass Room' the development of characters is already imperilled by the title. Good explanation of the Raum vs Zimmer difference. Many thanks for such a fantastic review.

A house as the main character sounds fascinating. Your review was intriguing and although I'm more of a genre reader (and writer) for this one I'll have to take a look.

Sounds like a fascinating read. It also sounds a lot like Peter Carey's Oscar and Lucinda, which features a glass church as its central metaphor. If you don't know Carey he's worth looking into and the film version, with Kate Blanchet as Lucinda, is wonderful.

Sounds good. I think I know someone this would appeal to... Thanks for the write-up.

Despite your excellent review, I'm not sure I could get to grips with the idea of the house being the chief protagonist. I like to be able to empathize with the characters, which may not be so easy as they move in and out of the story. Wolf Hall, however, I know I want to read.

Sounds a fascinating book. I don't know when I'd ever have time to read all the ones you recommend.

Interesting story as for me. It would be great to read something more about that matter. Thanx for sharing this material.
Joan Stepsen
Gadgets and gifts

Natural male enhancement has a that gets larger and larger over clock
time that allows the member to in reality successfully 'arise'.