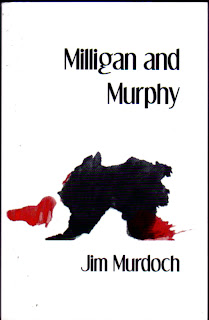 Let me say straight away that I very much enjoyed this book. I found it an excellent read. It was necessary to get that in first lest you, dear reader, should take the wrong impression from what I am about to say, which is that the book begins very slowly. Indeed, for the first twenty pages or so nothing very much happens - and the nothing much happens at something less than walking pace. It is not a fault, this slow start, it is a necessary acclimatisation to the pace of the story about to unfold and to the pace and energy levels of its two heroes.

Reading these early pages I constantly heard - or thought I heard- echoes of Samuel Beckett. I began to fantasize that maybe Milligan and Murphy were two characters who'd proved surplus to requirements when he was writing Waiting for Godot or one of his other plays. Maybe that was just my own mind set - I had been thinking about the play not long before. Whichever way it was, rest assured Vladimir and Estragon, Milligan and Murphy are not. And as there is no firm reason why a review should be chronological or follow a logical course, it might be helpful if I say here and now that when I was a bit further into the book I suddenly realised that I was not hearing echoes of Beckett, but a different, and I believe original, voice.

There is, shall I call it a family resemblance, but nothing more than that. For one thing, there are levels of philosophical debate (home spun philosophy for the most part, it is true, but philosophy none the less) in their apparently vacuous talk. This for instance from the early part of the book (it is Murphy talking):

"Do you not think that Mary Maguire has the most magnificent breasts?"
"I think it is a bit early in the morning to be considering weighty matters such as those."
"They're massive, they truly are."
"It makes me thirsty just thinking about them Murphy. Can we go and get fed now? I'm so hungry I could eat a cow."

Somewhere a bit earlier than this I should have told you something about our two heroes. They are half brothers. Murphy was a little late in arriving in this world and sometime after the event his father disappeared in strange circumstances. Whether or not the two events were connected appears to be in some sort of doubt. Mrs Murphy, it seems, took off with Murphy Junior in search of an adequate replacement, but ended up with Mr Milligan. Milligan and Murphy are inseparable, still living with mum and still sharing a bedroom, if not a bed. In any other milieu we might have dubbed them layabouts, but so invisibly do they merge into the oddities of Lissoy, the little village in Ireland which is home to them, that such a judgement would seem harsh.

The story proper begins with Ma Milligan telling them that "O'Connor is on the lookout for bodies for his farm." Milligan appeals against the implied instruction in this on the ground that it is Tuesday,
the day on which it is customary to collect their unemployment assistance. This argument is quickly shot down in flames and they set off for O'Connor's farm. They never arrive.

The last thing Milligan and Murphy could be accused of is being proactive. They do not control their lives. Stuff happens (like they come upon an unconscious tramp at the crossroads) and they take a certain direction, are nudged towards it. It is not quite clear how the event causes the result, but somehow that is what happens. They do not take the turning that leads to O'Connor's farm. The road they are on goes on, and somehow so do they. A pivotal moment in their lives passes unrecognised and vanishes for ever into the great blue yonder.

So begins their odyssey. During it they will discuss the meaninglessness of life with four strangers they will meet: the aforementioned tramp, a priest, an artist and an old woman. They are not without their humorous aspects, these conversations, as here with Jesse, the old woman, in her kitchen after she has befriended them and taken them to her home.
Murphy says:

"Over the last few days three people have spoken to my brother and me, in brief and at length, about the meaningless of existence: a tramp, a priest of all people, an artist and now you: this can't be a coincidence."
"What, and you think that means something?" Her tone was sarcastic. "You think God is trying to tell you that he doesn't exist? Ha!"

Not wishing to give away too much of the story, I will just add that Milligan and Murphy ends with the two of them leaning on the rail of a ship bound for Southampton, they having at an earlier point in their odyssey decided that it was the sea for them - though somehow I don't believe that will be the end of the tale.

Milligan and Murphy is available in paperback from FV Books and an ebook version will follow in due course. You can read the opening chapter here.

Jim's blog, The Truth About Lies, is here
Posted by Dave King at 05:13

This is definately on my list - sounds a great read.

Great review. I have 2 of Jim's books and now feel I need a 3rd.

Interesting. I have often seen Jim Murdoch's comments here, Dave. Sounds like quite a book, though probably not my 'cup of tea' (or should I say 'coffee' on this side of the Atlantic!)

def a fair review...i like that in a review, even if its a friend...and it does sound interesting...will check it out...

First of all can I just say thanks for posting this review, Dave? I’m quite delighted with it especially when you say that “for the first twenty pages or so nothing very much happens - and then nothing much happens at something less than walking pace” because that so reminds me of what Vivian Mercer had to say when describing Waiting for Godot, that it was a play where nothing happens in two acts. You have no idea how much that remark pleased me. Of course, as with Godot, I can see why that might put people off. Of course stuff does happen but I’m a great believer in what Fitzgerald said when he said, “Character is plot, plot is character.” This is a book about people first and foremost. It’s interesting that in a recent review of The Whole Truth (which, as you know, is the omnibus edition of my first two books) the reviewer also referenced the Mercer quote and I really wasn’t trying to evoke Beckett in those books. I’m also pleased you pointed out that I don’t try and mimic Beckett. That was never the point and, if I had tried, I think I would have been on a hiding to nothing.

@Jane – I’m glad the book’s piqued your interest and I’d be delighted if you wanted to investigate further.

@Kass – You, of course, will have some idea what you’re in for. Milligan and Murphy is different in tone and style to my first two books. The first two novels were written by a much younger man for starters. It is also my fourth book so I’d hope I’d improved by that time. I decided to pass over the third novel, The More Things Change, because it is a more involved work and Milligan and Murphy is a nice stepping stone. I intend to publish The More Things Change in a couple of years. There’s no rush.

@Mary – Not all my writing is going to appeal to everyone. I’m afraid I’m one of those writers whose style varies depending on what I’m writing and I’ll be interested to see what people who have read the novels to date and the poems (which are quite different in style to the prose) will think of them. Please have a look at my website and see if something else appeals. You can read excerpts from all my published books there along with some other stuff. Oh, and I’m a coffee drinker too. I was a tea jenny when I was a kid but tea is nowhere near as popular here in the UK as it once was.

@Brian – Dave and I may well be friends but I like to think that will all my friends any review they would post would be an honest one. The best way to see is firstly to have a look at other reviews (there are another two at the moment but I’m chasing more) and also to read the text for yourself. The opening chapter is quite long and if you’re not hooked by then then it’s probably not for you and that’s fine. It’s not like any of us is short of stuff to read these days.

All
I have to say I am impressed by the quality of the discussion that has been generated. I will not on this occasion respond in detail or personally. Am quite happy tp leave Jim to fend off (joke!) or welcome the remarks, but may throw in the odd remark if I feel it appropriate.

I might just say here that I did not at any time mean to suggest that I had felt Jim to be attempting to evoke Beckett. I do know what a fan he is of Beckett and I know something of the depth of his knowledge of him, so it would be surprising if there was not influence. Surprising and disappointing, for we are all influenced.

I haven't yet read any of Jim's books, but now I definitely shall.
I am intrigued!!

A terrific review, Dave about a terrific book. Milligan and Murphy stay with me.

I know that nothing much appears to happen in real and active terms in those opening twenty pages but to me it does in metaphysical terms. It's like entering someone's mind and getting stuck there in all the perambulations that go on inside. Lovely stuff.

Not sure if you read back comments Dave - on your recommendation I have read this and thoroughly enjoyed it, thanks for the heads up!