Two fragments here from childhood memory:
first, a searchlight like the lighthouse-light,
the way it cut the opaque darkness, where
touching then the sky it made it nebulous,
like Gran's blueberry jelly -- or so it
seemed to me. [A war time joke: two simpletons.
First simpleton: five pounds you can't climb to
the very top of that there beam and wave.
Second simpleton: No bet, I'll not get
half way to the top before you'll turn it off!]

We watched the soldiers play the light across
the sky, my dad and I, in search of Junkers
bombers, so I heard. It was a torch that turned
the sky's bleak slab to a new blazing vision
in my mind. And there below the lighthouse
the second vision, more homely, just as bright:
The dandelion clock puff balls that we blew,
breath after breath, to watch them float or hover,
timing our return to home and tea: three--
O-clock, four, five-of-the-clock -- gone time to go!
Sometimes we'd crush them if we didn't want
to go. Mostly, though we went! 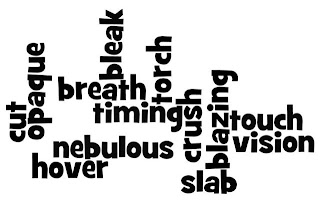 Written jointly for The Sunday Whirl who supplied the above wordle and The Mag 169 for whom I am much indebted for the great image, Wyeth Jamie's Lighthouse-dandelions.
Posted by Dave King at 09:38

Great recollections. The joke reminds me of an old favourite - a pilot recounting a dogfight. 'There were Fokkers to the left of me and Fokkers to the right.'
'Were you frightened?'
'I was. Those Fokkers were Messcherschmidts.'

Clever blending of the two prompts Dave! Recollections of war-time exploits and episodes given the personal touch is a special treat. Thanks for sharing!

Beautiful memories Dave - we all have them although they are - as you say - fragments.

No doubt sometimes time crushes us and other stretches us!.

nice blend of memories in this dave....the umor of the first in the place of fear....what the searchlights are looking for...the dandelion wishes to mark time....cool piece...

This was a strong one. (And I enjoyed both yours and Anthony's jokes!)

Excellent, Dave, that the picture could conjure up childhood memories. Like a light from the lighthouse, it lit up something in the subconscious.

What a wonderful trip down memory lane ... watching the coast during the war must have been such an adventure for a young boy and being a child by seaside is , for me, the fondest memory so I completely relate to playing in fields of dandelions and dune grasses closer to shore! Ah, youth!

Two fragments so evocative that I was transported there in all five senses...in fact, in the sixth too!
These are truly amazing.:)

Like the very personal tone of interaction you used for this piece. Makes the memories both more real and yet, intimate.

You have transported me to another time, another place ~~ like the dandelion puffballs.

I specially like the searchlight, cutting the opaque darkness, (and the wartime joke) and the dandelion clock puff balls ~ Enjoyed the recollections Dave ~

Nicely done...you brought your memories to the surface. Loved where the words took you!

Evocative and the picture really goes with the words.

ah that brightness in a child's fresh eye does stay with us forever, whatever the source in our lives, whereby hangs the story as you share so well-

This is beautiful. I love that the searchlight and the dandelion clocks (which we also told the time by) have equal billing in this poem. Thank you.

What nice memories! Interesting the things that stick out from our past.

I amazed at where these prompts take you and how real your world feels when I read about it.

I love when a word opens a memory.."blueberry"..a bucket on my little arm, chock full for Mom's pie that night. And a field of dandelions ready to deliver their messages! See what you did...

This is beautiful Dave!

...dandelions are def perfect for some recollection of memories... very engaging sir... thank you for sharing it with us... smiles...

Thanks so much to you all for this fab' collection of comments. I appreciated them all, the humour, the apt observations and the generosity of your remarks. Regrettably I have not time to answer them all individually, just to say that they are, everyone of them, much appreciated.

Internet Online System is very usefull and Billions of Peoples use Internet and Many of the peoples want to make money online from home and make online business for a life time
We have the best Online earning System with Data Entry Jobs, Online Jobs, Network Marketing, SMS Earning, and Much More Online Work From home, Skype : Jobz.Corner
JobzCorner.Com

You have shared some wonderful memories in this piece!

Well done Dave...don't you love it when you can combine prompts?

Thanks for stopping by The Way Eye See It earlier...it was much appreciated.