Don't say I didn't warn you! 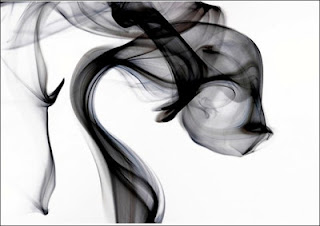 "Pony Tail".
Code for turbulence.
Turbulence in the gas chamber.
Invisible the gas,
the black smoke drawn
into elegant wisps...
Soon it will be spinning itself
into a fractal
of great beauty and complexity.

But that is not the reason why
Professor Darkman is delighted.
No, the invisibility of the gas
and the developing structure of
the smoke, these are the signs
that indicate his project will
succeed beyond his wildest dreams.
The long months of experiment and
slow development will not have been
in vain. Even now, at this, the
penultimate stage, nothing could live
in that chamber -- and no one would be
able to say how it had died. And there
are other "chambers", not made of glass.
Nothing so substantial. One the size of
Buckingham Palace, one to match the
great dome of St Paul's. One he calls
"The small perambulator"... in all, one
hundred and ninety six gas chambers, each
tailor made to exact dimensions. Naturally,
I am not permitted to reveal the purpose
of these dark plans, nor the secrets of
the chambers themselves -- for example,
how they manage to confine the gas within
such narrow and exact limits, but if in the
next month or so, you die mysteriously,
do not say I didn't warn you of the danger.


Written for Willows prompt at The Mag 170 to whom much thanks for the image "Pony Tail".
Posted by Dave King at 10:58

Dark and frightening. Family history (my father was a German Jew) meant that this left me chilled to the marrow and beyond. An excellent (albeit) frightening piece.

The spectre of the gas chamber
is frighteningly clear.
But what the experiments achieved
Are hard to perceive
One man's passion
Hard to fathom

oy this is scary...of course made me immediately think of the holocaust...for a man to see great beauty in killing on such scale i think is the most frightening aspect...

This chilled me to the core, Dave. I can only hope that there are no "Professor Darkman" people plotting the likes of this. And, yes, like Brian I thought of the holocaust as well. Never again.....

Gruesome! Definitely flash-fiction material. Holocaust invoking, past and future. And now this is the dominant image in my mind from that "ponytail." If that is the effect you wanted, you achieved it!

Thanks for that. One more thing to worry about. Great poem, but I might lose a little sleep over it.

A beautiful poem that puts the tip! Terrifying!

Say hello to Roald and the dark Willy Wonka from me !

Very clever - beginning with his name. Love it, but now I am afraid. ;)

Quite the most chilling..I know immediately what the chambers do....never again! You did this more than well...

Well, we certainly went in different directions with this! You wove quite a chilling tail here. I think this should be the beginning of a novel Dave.

Totally chilling and brilliantly done. We must never forget how such things can so easily happen.

I wish you would make a story I want to keep reading, chilling and masterfully expressed!

I am glad of the warning--call me paranoid, but this seems altogether too possible in our current insane world. Excellent verisimilitude, and very good use of suspense, as well. Donning my gas mask now, but I have a feeling it won't save me.

Holy smoke ... no pun intended. This is a spooky dark piece! Amazing where the mind's imagination can take us, yes? You've sent chills up a few spines this week, Dave!

The piece fits the image perfectly! And where one finds a romantic soft 'something', another can see the dark and ominous ... yin/yang effect to the max!

Ponytail .. code for turbulence. What a statement, what a way to begin the poem! This was fascinating. I was unable to glance away as I read, focused on every word.
YES, danger, danger!

Great lines converging to a stunning ending.
A warning so much on target.

The prompt took you in a very scary direction this week.

Dave, excellent as usual and perhaps where technology and poetry meet somewhere... that what we are warned or not will not touch dead things nor heed those who might say our dreams are not real and the chambers of our hearts more than a machine but alive. So much of poetry is in the mind of the reader...

Not a word out of place. Not one wasted. In service to your uniqueness, which I quite enjoy.

Everyone
First, a big thank you for the response, which has sent me back to the poetic equivalent of the drawing board. I was wondering... do you think we could just write this up as a classic example of an author not reading his text?
I must confess I was dumbfounded when I began to read your comments, not least by their unanimity. I did wonder - briefly - if I was looking at the wrong set, but no, there they all were, the words, just as you had read them and I had written them. Yet the truth is that never once had any thought of the holocaust entered my head in the writing of this. It just did not figure.
The gas chamber -- emotive phrase, should have rung alarm bells for me -- was a small(ish) glass and metal affair that stood on the master's demonstration desk in the school chemistry laboratory. We (more often, he) manufactured gases or mixed gases in the safety of its confines. It did go by other names, fume cabinet being one, and no doubt it would have been more helpful if I had used one of the alternatives. My Professor Darkman is a terrorist concocting a toxic gas (think sars) with which to wage his war on civilisation. His " gas chambers" are a high tech means he has devised for confining the gas to well-defined area.
So then, my abject apologies to anyone I may have chilled more thoroughly than intended. Hope no one lost sleep over it.

I did not see the past in this piece but a modern day terrorist hatching his plans. I see now on re-read what your intent was and enjoyed it as a totally different poem.

Very scary!
Like Carl, I too saw a modern terrorist plotting his evil plans.
Although I understood your intent, my mind was still fixated on that terrorist...an unfortunate sign of our times, maybe?
A totally engrossing write, Dave.:)

Fabulous Dave! This had a real fascinating dark beauty about it.

I reckon I'd have made Darkman a dedicated 'Igor' having enjoyed it so intensely!