Yes, good to be back, though it may not be for long. Apologies all round for dropping off the radar with no word of explanation. Truth is, last Wednesday morning in the wee small hours, I began to haemorrhage and was whisked away to A and E. Transferred to the Surgical Assessment Unit, I didn't escape until late yesterday. I am now awaiting the results of biopsies and tests and things.

But for now, here I am with a week old post inspired by Tess Kincaid's prompt for last week, the painting by Marc Chagall La Promenade. (Find the site here

Being in sore need of a quick post, I have taken the liberty of using it anyway.

In the meantime grateful thanks to all those kind friends who have left comments and/or good wishes. I have read them all and am now off to do so again, 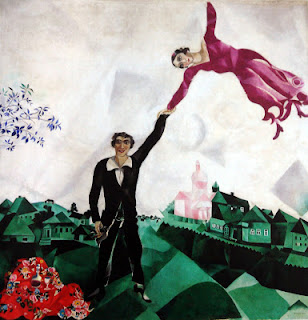 He stands astride the world;
astride the hills that someone squeezed
from a baker's dozen toothpaste tubes;
astride the rolling hills - not water
and not solid earth,
but something spiritual between.
The corporeal lies discarded on the floor:
a picnic's crumpled cloth;
unwanted egg cups, flowers, wine -
decanted, part consumed. But these
he does not stand astride. He dances
past the town, its church, its houses, civic halls,
all thrown like dice along the line of hills.
They fall in broken lines, a sort of stave
for his atonal songs. Music is his thing.

She is the song he sings.
Embodiment sublime plucked from the score.
His voice has thrown her to the stars.
Pregnant with the stars' reverberations,
pregnant with their light
and other-worldliness,
their landscape lifts, becomes one with
the world beyond.

their landscape lifts,
becomes one with
the world beyond

The ending sums it all up. She is there together with him towards good things beyond.

Nice to have you back, Dave! Healthier and raring to go. There are lots of goings-on here again. Brilliant take!

Dave, I really like the second stanza of your poem here. Does not have the appearance of a quick one at all. Smiles!

I was waiting and hoping for your return. What a scary situation you must have gone through. I do hope that the results of the tests show something easily treatable.

dave, glad to see you...oy, i am glad you escaped and wish you the best on those results...rest up man...

she is the song he sings, voice thrown to the stars....love that man...that whole stanza breathes love...

Welcome back, Dave, with such a charming poem which seems suggest some sign.

I really hope your health problem will be mild.

Wonderful to see you back, Dave.
I do hope and pray all goes well for you. I am thinking of you, and hoping for your speedy recovery.

There is such depth of feeling in this beautiful poem...it is exactly what we need in these unstable times.
'their landscape lifts, becomes one
with the world beyond'- I so love that final line!:)

Add my name to the well-wishers list. I wondered why I hadn't seen your name the past few days ...

Sending all kinds of positive energy your way, please keep us updated.

Lyrical writing.
So sorry to hear of your unexpected journey to A&E and SAU. I hope you're feeling much better now and that your results will come through quickly and encouragingly.

Glad to hear you are back. When you did not post for several days we were quite worried. Hope you are back up to snuff soon!

I am glad you are back with a great poem of contemplation and meditation. All my best wishes for the results of your tests.

Sorry it was such a reason for your absence - I thought you were probably on holiday. Hope the test results prove to be good ones Dave. I have missed your blog.

Great to have you back. I admit that I swung by a couple of times and grew more concerned each time. I'm glad you're (almost) out of danger. And as usual, the quality of your poetry doesn't change, good as it's always been. Many thanks.

Beautiful, sir. So much love encapsulated in that second stanza (breathtaking, really).
Glad that you are back, hope that all goes well. Will be thinking of you...best wishes...

I am thrilled to see you back with a stunning, moving and evocative piece - and hope the medical mayhem settles very soon - and completely. You were much missed.
(and ps - I have resiled from google plus, so am accessible again)

Thank you all so much for your comments and well wishes. They have meant a great deal to me. Now I must ask you to excuse me when - like now - I don't get around to my replies. Truth is I am not yet back to firing on all cylinders.

May the healing continue!

Outstanding imagery! I wish you courage in this trying time. Speedy recovery, and good health to you Dave :)