The train winds its lonely way across the prairie
and disappears into The Throat, a rock formation
like a fan vault, but open at the top.
Part tunnel and part cutting of foliated gneiss,
an observer on the prairie would see nothing of
the train at this point than a swirl of smoke
travelling from north to south at sixty miles an hour.
Not, that is, until the train emerges from
its semi subterranean sightseeing tour
before another rock formation, a cave known locally as
The Halls of the Outlaw Kings. The driver feels
as though the blood has frozen solid in his limbs and heart.
Here in these caves it was that forty years ago
a rapture overcame him as a girl he'd never seen before
danced nimbly from his arms, there to be turned to gneiss
before his unbelieving eyes. He craves her still --
and more and more profoundly with each passing day.


Using the twelve words selected as prompt by The Sunday Whirl. (Wordle 111) 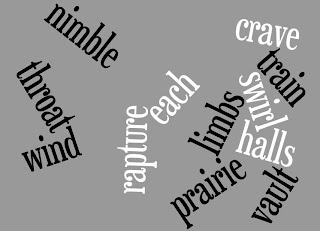 This is fantastic Dave the descriptions are gorgeous I was really right there on the train taking in the scenery and the end loved it. I didn't even know this was for a wordle it was so seamless

I hope he finds a way to join her again...

Did not see this coming. A turn and surprise that made me sad as the train rushes on by.

The Throat sounds gorgeous. These rock formation provide a rich setting for your narrator's memories. Well done. You sent my iPhone to dictionary.com to look up gneiss. Great word for this context, it sounds texturally stunning. Thanks for sharing this Dave.

Wow, craving her so strongly still after 40 years....that is quite something. Loved this story, Dave, with its mysticism!

do think I heard the whistle... umm, so do I need to be concerned regarding an engineer not focusing on his job

really great imagery in this...the train always carries nostalgia for me...the introduction of the girl in this though is where the real story is....and you work it well...and the train keeps a rolling...

An impressive picture of longing.

"More profoundly with each passing day."

Aye. That's where we are, what we share, mortal brother poet-

The tunnel like cave is symbolic and your words brought me a different sight at last.

Mystical. 'the blood has frozen solid in his limbs and heart' - shivers.

Oh, how wonderfully romantic!
If only he could be transported back forty years to a different outcome...

The geological information woven through your poem gives it realism. I liked the haunted ending and the echo of longing like a train's whistle far and far.

Well,my goodness, you've created magic with your words here! Girls turning to gneiss? What next! Wow!

A Whirl with Stanley Kunitz

Elephant's Child
I'm sure he will...

Tabor
You sure it wasn't the train that madde you sad? They do that to me.

undercaws
Welcome to my blog. My thanks to you for your lovely comment.

Tommaso
Good of you to say this. Useful to have your thoughts on it.

Cloudia
I'm sure you are right. Thanks for saying.

haricot
Yes, you're right. There is symbolism there.

Ygraine
Yes, now wouldn't that be a result? And come to think of it...

Carol
Welcome and thanks for your contribution. Really good to have you aboard.

Magical Mystical Teacher
Many thanks for your kind comment. Good to have had your visit. Impressive blog you have.