Last Sunday my son, his wife, a friend and myself enjoyed a day out at Wembley. The occasion for this jolly was the final of the Johnson's Paint (football) Trophy and the reason for our presence was the fact that Southampton were playing Carlisle United and we all are life-long Southampton fans. That is to say I have been one since the age of forty, when life begins; Gavin, my son since he was eight, when life had hardly begun; and the others... well, alright, my daughter-in-law quite recently and of their friend I cannot say. But there we were, the four of us, soaking up the atmosphere. To make the day absolutely perfect, it just so happened that Southampton won 4 - 1, which equalled the largest winning margin ever for that competition - though it should be said that there were times during the match when Carlisle were the better side, so it was difficult not to feel a little sympathy for their supporters. They didn't deserve to lose by three goals.

Now there are those who would call the Johnson's Paint Trophy a Mickey Mouse Cup (and what is wrong with Mickey Mouse, I'd like to know), but the context for this day out was that a year earlier Southampton were in dire financial straits; they were bound for administration, and it looked as though they would cease to exist. So for me at any rate, and I think for a large number of the 44,000 Southampton supporters present (the largest single ticket allocation ever for Wembley, and supposedly the largest exodus ever from the South Coast), the day was not just about winning, but about enjoying the occasion, and most of all about celebrating the fact that the club is still in existence and once again thriving and successful.

Not for the first time, football provides a metaphor for life. Maybe we do not often enough take time out simply to celebrate the fact that we are still here. 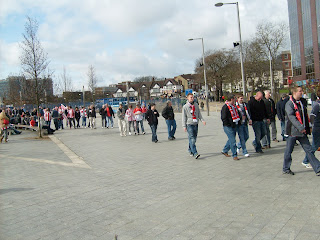 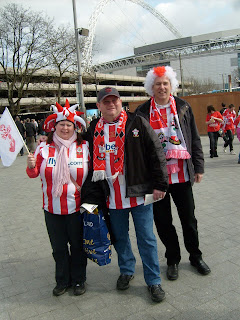 Glad you had a good day, Dave. I'm a Sheffield United fan - although I was probably 8 when I last saw a match! Football has never really had any allure.

Quite a celebration, with you and the family having a day out and Southampton winning the cup.
Very nice pictures too!

Love your life begins at 40 spin ~ because that's when mine began to make sense! Also loved the road sign language nuttiness. Road signs in New Zealand, Australia, the UK I have no problem with of course ... but OH do I ever have a tendency to turn onto the wrong side of the road ... especially on little country byways.

Photo of your people look like my people- is it spring that brings it about?

You well show the pleasure that a refined intellect may take in "common" pastimes. I dream of lyrical afternoons of baseball...

So happy that you are well enjoying your life.

Warm Aloha from Hawaii my Friend!

Could that be you in the wig?
What fun!

As a means of having and resolving conflict, few things beat football.

Especially when it's your team that wins.

Wow. Its sure must have been a fun day. BTW, lovely pictures...:)

Have a good day!

Carl
It was, not least because I do not get to many these days.

Derrick
I suppose I should make something of "Sheffield United fan" and football having no allure, but I'll not!

DUTA
Thanks for that. Yes, a great day out.

Helen
Much too late in life for me to contemplate driving on the wrong side of the road, so I sympathise.

Linda Sue
I'm sure it is.

Cloudia
There's poetry in bashing, kicking or throwing balls around the place.

Kass
Nope, sorry. That be me behind the camera - very staidly dressed.

Mr Stupid
It was indeed. Thanks for that.

Ronda
Yup - fans as in fanatics!

It sounds like a great time was had by all and I'm glad to hear life begins at forty because I just reached that milestone myself. Cheers.

Soaking up the atmosphere in April, don't ever want to work as hard as I did in March again!

Greetings from Australia, I followed your comment at Kass's blog.

re your "and what is wrong with Mickey Mouse?" may I venture that he was always mean to Pluto?

2. and when I got here, I saw Dominic Rivron, a blog I also follow. small world.

3.In your profile under books, you might want to repair The Prime Of Miss Jean Brodie.
Happy Spring to you.