How's this for an installation? 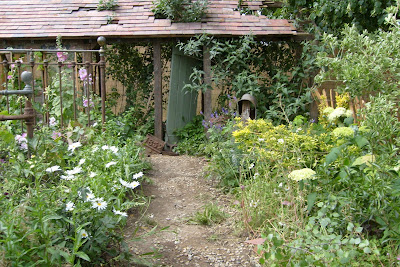 Eight years ago Doreen and I went to the Chelsea Flower Show. It was our first biggy, that is not counting purely local shows. For me the highlight of that show was a concept garden (a new concept for me!) called Tearman si, A Celtic Sanctuary. It's theme was Ireland, its history, folk lore, geography, myths and much else. I will not say too much more about it now, as I shall come to it again in another post I am preparing.

What struck me at the time of our Chelsea visit was how closely this concept of the concept garden (owch!) appeared to be related to the art installation. We have been to other shows since, and it has seemed to me that these concept gardens have become steadily more popular over that period of time and are now one of the most studied aspects of any such show. Yet inall that time I have never seen or heard them compared to the art installation. Until last Tuesday, that is. Each Tuesday The Independent publishes an essay and last week's happened to be on the subject of whether a garden can be a work of art.

It so happened that the following day we were off to The Hampton Court Palace Flower Show - and it further happened that I did not read the essay until after we had returned, but there was, as there was bound to be, the usual array of concept gardens there. One in particular struck me as being so like your common (or garden?) gallery installation as to be indistinguishable from it. It was called A Lost Loved Garden, it is the subject of the photograph above.

What it purported to be was a once much-loved garden that had fallen on hard times and become much neglected to the point where an antique iron bedstead languished among the aquilegia and red campion, whilst weeds were growing through its frame; the shed door hung off its hinges, and it was difficult in places to distinguish weed from planting. But that, I guess, was the point: the garden was reseeding itself, nature was taking over, restoring it, if not to its original plan, then to one of nature's own.

Haiku #204
He's dumped his old love
will be showing off his new -
Tiger and his putters
Posted by Dave King at 10:30

While never fully expressing the idea, I've always believed that a garden is a work of art.

I’ve always understood art to be the opposite of nature. It is after all the prefix to artificial. Garden art falls between the two – it is contrived but it also grows at its own pace. A garden like the one in the picture, which looks as if it has been left to its own devices, is beautiful to look at but I’m not sure that it’s artful. I’ve always had a problem with artists relinquishing control of their work and that’s what’s happened here, an artist has arranged things a certain way and allowed Nature to do the rest – a collaboration if you will. Most art gardens are heavily maintained so that they keep their shape. I much prefer to simply display at among nature and allow them to complement each other: one static, unchanging, the other ever-changing.

Thanks Karen.
I can agree with your sentiment, but I have this odd sensation that in doing so I'm using the word art in a slightly different way.

Jim
I agree totally with the first part of your comment, but I do not see this particular piece as an example of the gardener relinquishing control. I agree there must be a partial relaxation, but here he is not allowing nature in - at least, no more than it will intrude in any garden. He is only pretending to. He has contrived what he imagines nature would have done, given the opportunity. There are many examples in art - particularly modern art - of artists relinquishing partial control, inviting in randomness etc.

I like the idea of Garden as art. Many of the same concepts apply and the gardeners are just as creative and inspired.

The Haiku was inspired too.

Carl
It does seem to me that there is art of some sort in any garden worthy of the name, but the idea of concept art in garden form is something fairly new to me. That is to say, it first struck me eight years ago, but I have only recently begun to give it serious consideration.

Art? Garden? Either which way it's beautiful.According to Oscar Wilde art must be quite useless, does this garden have a use?
Love the old bedstead.

Patina at it's finest.

I consider my garden as a work of art.

(Tiger is often in my neck of the woods, since I live in a big golfing community...bleh.)

You pretty much described my life in your last paragraph. At least it leads to restoration.

And to think, Dave, I could have done a garden like that year's ago! A garden certainly can be a work of art.

If there is anything that makes me feel uneasy - it is an organized garden, all in a row- much prefer that conceptual garden of abundance and wild willy nilly - taking over- growth! Beautiful!

What an interesting post and I can't wait to read more about the Irish garden. Lovely pic and I liked the sound of the wild garden with the bedstead. I have an old bike in mine... :-)
I think that gardeners when they 'design' their gardens use colour as artists do and I see creating a garden as a work of art but I guess that Nature always has the upper hand in the end.

Totalfeckineejit
Yes, I fell in love with the bedstead. I suppose a garden should have a use in order to have a focus and a certain character... but I'm willing to be dissuaded.

Willow
Oh well, you'v e got it all then - garden and Tiger!

Derrick
I always wanted a wilderness garden because I assumed it would mean no work, but when gardeners says wilderness, they usually don't mean wilderness.

Linda Sue
Mmmm... I don't much care for soldiers on parade, either.

Cait
Interesting response. Nothing there I can disagree with. Thanks Cait.

I love wild, untamed gardens! Put a tin roof over a garden shed to keep out the rain and a little mosquito netting to keep the bugs away ... I could live in it! Ahhhh ~ The sound of the rain on a tin roof.

Your haiku is brilliant!

art is skilled and practiced craft, with heart. So the randomness is controlled.
never one without the other I am told.....

of course a garden is ART
the best kind of art

why do people ( not you --I mean boring academics....!) go on an on in endless circles trying to put labels on things and define them ad nauseam.

The joy of gardening, I think, is the interaction between gardener and nature
with each party offering suggestions.....

sorry I have been absent so long!