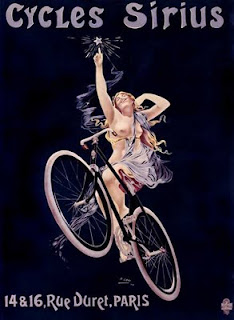 We were childhood sweet hearts.
(I was a one girl-man back then - I guess
the starlight must have dimmed my eyes a tad.)
We saw each other every day:
one evening she would ride down to me,
the next  I'd cycle up to her. And that
was really something - no mistake!

Long time it took to turn us into lovers,
we never met but one of us was knackered!
One time I came a cropper way up there.
Well, on that busy roundabout outside The Plough.
The slipstream from a distant comet, took my wheel
and I was rolling in the stardust, thought I'd died.
The landlord came and fixed me up, he did,
but that was it, I didn't feel like any "How's your Father"
that night. Which discombobulated her. She had a strength
I never had, and that's a fact. Don't know
where it came from, but it had to be believed.
Some nights she'd leave me feeling like a rag doll
dragged up from a restless sea and left to dry.

That was the night of nights though, that night
of the famous puncture. Just getting on my bike I was,
to cycle home, I noticed that the tyre was  flat.
I fixed it, 'course I did, but by that time
it was too late to make it home - or so she said.
We slept together that night. First time ever.
Kept it to ourselves - well, bet yer bottom!
Then in the early hours we both woke up -
did everything together by that time. Know what?
She only sticks her finger out into the night...
and when she draws it back it was aglow.
Starlight shining from it like it was a candle in the night.
Romantic, that was. Well, I thought so, at the time.

It couldn't last of course. If only 'cause we rode
those bikes into the ground - well, into the stratosphere,
I s'pose. They don't make bikes like those these days!


I am obliged to Magpie Tales for the picture prompt.
Posted by Dave King at 09:32

It was fun when someone shares your passion and you grew up together. Yes, it comes with a special bike too! Great tale!

Young love doesn't often last. I really liked the flow of this poem and the puns.

Makes me wish I'd learned to ride a bike...♥

..ah, i enjoyed it.. the narration, the soft flow, the detailed descriptions, the time frame, and the story itself amalgamated very very well... kinda reminded me of a childhood memories way back the primary years... thanks for the poem!(:

Wonderful and powerful story. I totally enjoyed it.

Powerful indeed. Favorite line: "... that night
of the famous puncture."

You are a gifted storyteller ~ thanks for this wonderful story~

and romantic too from these lines:
"She only sticks her finger out into the night...
and when she draws it back it was aglow.
Starlight shining from it like it was a candle in the night."

Oh for the days of love on a slipstream...romantic, indeed!

They don't make bikes (or anything) like that anymore...thanks for the magic!

Love it. Romance and universe as one. It feels like that.

They don't make bikes like they used to!!....good job too...bikes are definitely on the menu!

This is a beautiful poem of young love, Dave. There is nothing like those times...in memory anyway! Time to get my bicycle out and go for a spin.

Hope you are still a one-girl man Dave - even if it is a different girl!

Dave, I thoroughly enjoyed this!!!

Clever and fun without
becoming too naughty,
capturing naiveté and young
love and still connecting
it to bicycles and stars.
Good on you, sir.

I liked your story Dave and the bit of local dialogue you used as well as smidgens of dry humor.

I don't know why but this poem reminds of the movie E.T. especially the the line "The slipstream from a distant comet took my wheel and i was riding in stardust" which could be the scene from the movie where the kids and E.T. are airbourne on the bike with the moon in the background and also the line "when she draws it back aglow, E.T. has a glowing member in the movie to :-).

and those were the days!

What a great storyteller you are...that's a fact....really love these and I leave it feeling a sense wonder on all those days we called youth....very nice read..bkm

kaykuala
Ah, what I wouldn't give for that bike! Thanks for the comment.

jabblog
No, alas, it doesn't. Thanks for the appreciative comment.

Jinksy
You could always try a tandem!

WINDOWLAD
MY thanks for such a kind response. It's good to know you liked it. And blessings to yourself.

Carl
Many thanks for your encouragement.

David
Ah, good. Glad you liked that - It came from a fond memory!

Heaven
And my thanks to you for your very generous response. Yes, romance is a necessary part of life - I think.

Lyn
Really good to have you commenting. Much appreciated.

anthonynorth
yes it does, I'm glad to hear it does for you also. (Not enough of it about, these days!)

Gerry
On? Or did you mean off? - Or am I thicker than usual, this morning? Thanks anyway.

120 Socks
She was that! Much thanks for the compliment.

Mary
Absolutely - if only it was as easy as that! Thanks.

Weaver of Grass
Fear not. You know what they say: "I'm not too old to run after girls. It's when I catch 'em, that's when I'm too old!"

Helen
That's great to knnow. Really great. Thanks for saying.

Glenn
Hi and a warm welcome to the blog. Thank you for coming and for leaving such a generous comment.

Ann
Good to have your company and to read what you thought. My thanks to you for your thoughts. Much appreciated.

Windsmoke
I remember it. I don't think it was at all in my mind when I wrote the poem, but I her the echo well enough.

Morning
A warm welcome to you and much thanks for leaving your comment.

Kathe
Hi. Welcome indeed. Thanks for your visit and response. I do agree: they WERE the days!

signed...bkm
It's really great to have you visiting, and I much appreciate the thought that has gone into your response. You're right. I do believe that's where the wonder went!

Famous puncture, indeed. I loved this.

A charming read with a giggle along the way - love the puns and word choices.

I've never thought of bike riding as a deterrent to sex. Loved reading this.
Thanks.