Following on from Brian Miller's Random Word prompt at dVerse Poets last Saturday, ten random words used by Victoria C Slotto at Live2Write"day's Blog to fire a poem has tempted me -- too late for inclusion in the Open Link Night -- to do the same (even though, as some of you will know, I am not usually inspired by such prompts).

The randomly chosen words on her blog were: Elegance, Parousia, Steal, Merge, Enfold, Garnet, Ruptured, Saintly, Sabbath, Nebula. In escatology, she explained, the word Parousia refers to the end-time. 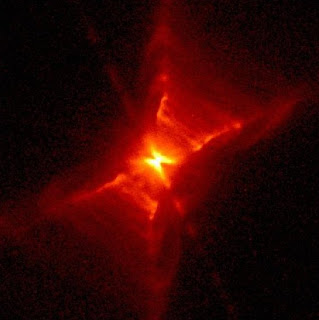 Grandad's Face
First time solo on the mighty 6.5...
aligning it, a slight miscalculation...
and there it is, an unknown nebula
in a sector thought to be uninteresting.
Now the jealousy will start. His seniors
with hours of gazing through the telescope
and never anything like this! Beginner's luck?
Of course it is! As if that bothers him,
he's focussed on the cloud of deep red dust,
it's golden halo -- and the custom that
will give the privilege to him of naming it!

He'll call it Garnet. Why? The colour, yes,
of course, but more than that... it's
reminding him of Granddad's garnet signet ring.
And soon, of course, the cranks will be around
peddling their tales of prophesies fulfilled.
Parousia indeed! He's having none of that!

But the halo puzzles him... why that?
He'll study it for several days, then realise
the dust is turning in upon itself,
the gold enfolding garnet like a present
being wrapped, the colours merging where
they meet. He thinks again of Grand-
dad's ring, how elegant it is -- he is. And how
it's only for the Sabbath, how he wears it only
for the Sunday Services, how true he is,
a saintly man, a man imbued with so much
divine power, you would have thought, as to
work miracles or give the world a sign.

And what would Granddad make of this, his Garnet
Nebula? And then he saw it... in the centre of
the red dust cloud, the face of Granddad,
smiling. Younger. Growing older. Looking
gaga. And then the image ruptured
and he saw the end of all things
and he could not look again.

The image is sourced from Wikimedia Commons.
Posted by Dave King at 11:03

fascinating....really love the progression in this....the grandfather and his ring...the fresh context and then seeing the face in the cloud....very cool...and you did not go easy with the words either....goodness dave

This would be so hard for me to include all the diverse sounds of hte words and meaning. Good job.

Wow, you did a great job with very difficult words! Kudos.

This must have been so difficult to work on...yet you've created a truly amazing poem from it!
You have my greatest admiration. Very well done!:)

I really love what you have done with the given words. We do this sort of thing in our local writing group for 'homework' and I always enjoy it but not everyone likes it. (Arians love a challenge!)
In fact my last blog post is one such piece of homework.
I may check out the poetry group you sourced the idea from - they were great words"

A poem, with grandad and the ring echoing into itself powerfully until the final apocalyptic vision.
A moving, haunting poem.

Congratulations. These were difficult words to weave so seamlessly into a great poem. Thank you.

Link exchange is nothing else however it is only placing the other person's webpage link on your page at appropriate place and other person will also do same in support of you.

Brian
Thanks Brian. Almost you persuade me to try these a little more in future. Comment much valued.

Tabor
Yes, it's strange; I've tried these in the past -- usually with a leass difficult word selection -- and not produced anything I thought acceptable. Your comment helps considerably.

Mary
Thanks so much for this. As indicated above, a very helpful comment for which I am very grateful.

anthonynorth
I am really appreciative of this comment. Thank you.

Ygraine
Wow, seems I must have done something right. I think this seals it: I shall look more carefully at random words and wordles in future!

Cait
Yes, you are right: they were great words, though did not seem so at first. They did get the the old grey matter working, though.

Tommaso
Many thanks for saying this, it somewhat tops my expectations for it.

The Elephant's Child
Thanks again for such kind words.