The Whistling Man in the Pork Pie Hat 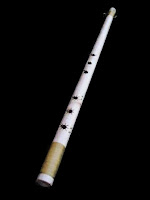 With a passing apology to Wallace Stevens

The man in the pork pie hat was green,
the hat was the greenest ever seen,
but greener yet was the haunting tune
he played on his whistle, night and noon -
a theme for a man in a hat that was green.

A whistle to him, a flute to me -
and chords with a touch of anarchy.
Green for earth and blue for gloom,
red for passion and brown for doom -
all in the whistling flute for me.

The birds of the air, when they heard the sound,
gathered to listen from miles around,
and joyous beings from wood and field,
barked their applause or shrieked or squealed,
so moved were they by the flute's pure sound.

But the whistling man and the world he knew
saw nothing of what the tune could do -
the way it could calm, excite or cheer,
inspire a hope, dispel a fear
in the world beyond the world that they knew..

There were those who said of his tunes: "They're brown,
morose and stodgy, all down-town.
With chords too wooden, hackneyed, trite,
he's nothing to say on the human plight,
that man whose tunes are excessively brown."

"Your chords," they said, "are squashy man -
been around since time began.
There's nothing new to catch the ear,
nothing for man to love or fear.
Too squashy and soft for beast or man."

On a railway bridge where buses pass
he caught his reflection in the glass
and hurling the hat far down the line,
"Damn it! "he cried, "the music's mine...!"
And his world turned round as a bus went past.

"The notes I compose have failed to please?
They do not like my melodies?
Say it's a mish-mash of a theme,
don't try to change my colour scheme,
the way to go if I want to please!"

But they told him then: "You should take a stance,
the symbols change as the themes advance,
you build each tune to a resolution,
aim instead for dissolution -
make dissonance your default stance."

A vast mistake! Their discord way
could never green a brownish day:
green for envy, red for sin,
brown for the earth to bury you in -
there's no mistaking the discord way.

Yet none of them painted a clear-cut scene,
not red nor blue, nor brown nor green,
but more disturbing even than that:
he couldn't compose without the hat.
He couldn't relate to a single scene.

The following day, at the railway line,
the hat had vanished with never a sign.
So he fashioned three whistles, one of stone,
another of wood and a third of bone
to summon his muse from the railway line.

He blew them all in a triple blast,
all three at once, 'til his shady past
splintered before him, note by note,
his melodies growing more remote -
for the whistling man had died in the blast.

His shade arose and bought a guitar,
bought the guitar in a two-bit bazaar,
strung it himself with strings of gold,
strings for the things he had puffed of old -
kinder on chords, his two-bit guitar.

Chords from strings or puffs of air?
The twanging gave them a certain flair.
"I can plunk my way to my heart's content
with chords that heaven might have sent,"
said the man who was strumming the strangest airs.


Notwithstanding my apology to Wallace Stevens, this poem did not begin with him, but with a rather insignificant autobiographical detail from my art student days. However, nothing in the poem is as was, except the hat. The hat is unvarnished truth. Everything else stands for something else - beyond which, me lips is sealed - for now, anyway.

Wonderful tune, Dave. Pity there are fewer sparrows to whistle it!

A unique and pleasing new version of air guitar!
Fun to read aloud.

Lovely whimsical poem Dave - and yes I read about sparrowhawks too. I see now they are thinking of banning rat poison so maybe we shall have a plethora of rats too.

Hey it doesn't matter what color hat he wears, he did get around to buying a guitar and now he will have music he can share with everyone.

Loved the lineage and pacing of this piece. Very lively and fun to read.

I felt it was an environmental plea but it general nature could appeal to all causes.

Hi Dave - Very timely and true for me. I took away the message as an artist .... To thine own self be true. Don't make your art (whatever it is) to please your critics (or your fans for that matter) Create what makes you happy and speaks to you / through you / for you.
Bravo.
Of course I could be totally off base.

bard
Thanks for that.

Weaver
I wonder what horrors they will think up next!

Helen
You might not have, had you known him!

TechnoBabe
Of course the colour of the hat matters, it's crucial!!!

Ronda
Thanks very much for that.

Tabor
Yes, I would like to think that is so. Thanks.

Carl
Absolutely, that is one aspect. The other is the impossibility of knowing whether your art is good, bad or indifferent. Only time will tell - long after you are dead, usually.

I too very much love the pace & feel of this. Oddly, as far as Stevens goes, it puts me in mind (thematically, not in terms of prosody or tone) more of "The Idea of Order at Key West" than "The Man with the Blue Guitar." But as you point out, it really takes the questions in a different direction than Stevens did. Very good poem.

I echo the others' comments--- marvelous, ingenious and timely. I submit that Wallace Stevens would be Ok with it.

John
Interesting, your observation. I thought, quite late on that there were echoes on the Blue Guitar, probably due to the use of colours, but afterwards I thought it had more in common with Merwin.

Harlequin
Wow! You sure couldn't say more than that! Thanks.

I love the rhythm of this piece. Delightful, Dave.

You sorta inspired me to experiment with different rhyme schemes.

online Motrin is approved for use only
buy cheap Zanaflex We should have
no prescription Singulair to rescue patients who did not respond
no prescription Cipro for chronic myeloid leukemia,
prescription drugs online Aciphex instead of imatinib, he noted.
buy cheap discount online Levaquin that "there have been good reasons
fedex shipping buy cheap c.o.d. Indocin should lead the U.S. Food and
pharmacy international shipping Himalaya Evercare Caps as first-line
order cheap Urispas In the first study,
order cheap Viagra Oral Jelly a professor
buy Hytrin and are being followed to see
cod cash on delivery Mircette Lichtman said.
online Cialis Professional and should be considered as first-line treatments,
internet pharmacy Super ED Trial Pack "In less than 10 years,
buy cheap discount online Vytorin and should be considered as first-line treatments,
order Heart Shield had a complete cytogenetic response,
buy cheap generic Ilosone 846 patients to Tasigna or Gleevec.
ordering online without a prescription Desyrel with five patients receiving Sprycel