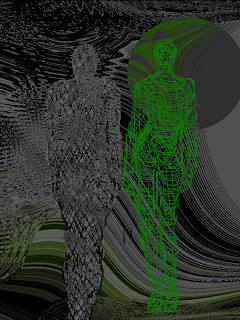 As man stands waiting on the waterfront -
one front of many fronts of all the waters of the earth,
the sea is taking over from the land
the way that something that is neither day nor night
is taking over from the sun and moon -
the ocean, which he's always felt emergent,
still moving forward from its days as primal soup,
has gone into reverse, moved with the sun and moon towards
a time that will not be, or if it is, will never end; a time
when light and dark will clasp each other. A last gasp
before the last extinction. Sea has ownership of sky,
has spawned a dozen whirlpools where the clouds once were.

Seen through careening walls of water,
a dark and greening sun.

Appropriate, that sea, his cradle,
is to take him back the way he was before:
his flesh and all the flesh and fowl that share the earth with him -
or have done until now.

The wind has tripled many times the height and strength of waves
and driven them against the last remaining land
to splinter them in spray.
That which was solid and eternal as the hills
has ebbed away.

This is my contribution for today to Writers Island's NATIONAL POETRY's Free Writing Month.
Posted by Dave King at 08:59

The power of the sea washes through your words to the final, gentle ebb. How beautiful...

The phrasing you have used sweeps in on the waves of your sentences and sends the "careening tides" to wash away the world and all it's living things. I love the power and natural force of your poem and how it ebbs away in the final sentence. The reader is overcome by the green sea swallowing the sky and is washed away eternally by the driving waves. The observer of this scenario reminds me of myself watching the tsunami rolling into Japan on television. Horrific memories. Thank you for creating this vivid expression.

Those descriptions seemed so realistic!

under the sentence of death that we are all under, I often think of these things too
an excellent poem

It has a contradicting peaceful and dreadful feel to it. I like.

Disturbing and beautiful at the same time, it seems. An inevitability, yet also a longing to be a part.

Lovely, the cycles, the individual and mass end in water. As you said, appropriate.

Beautiful and haunting. Your words flow like the sea of which you speak, yet ebb away as well. Really like the imagery here, but the sounds, in imiatation of the sea were even betther.

"when light and dark will clasp each other" - that imagery of land and water, sun and moon, yin and yang, just keeps coming through, all those natural cycles which you describe so beautifully. Thank you.

Very disturbing poem of the future :-)

Amazing imager...I could almost picture it as on the big screen...vividly frightening. Excellent!

Dave, this is fantastic! A haunting piece with such vivid descriptions. I am so happy to see you posting over at Writer's Island. You will be meeting some fine writers, as well as, fine folks over there.

Thanks Dave, I enjoyed reading this!
You paint a lovely (word) picture.
Is the artwork one of yours too!

Thanks Jinksy - not the destructive power, I hope.

Linda
Thank you so much for such an enthusiastic response. Quite unexpected and difficult to know how to reply, but very appreciative. Thanks again .

Ron
Hi, Good to have you visiting and many thanks for the useful feedback.

Stan Ski
Welcome to my blog and many thanks for the visit.

Isabel
Yes, difficult to know how to look ahead with equanimity. Than ks for the encouragement.

anthonynorth
I think that sums up my feelings admirably. They include both of those.

Mary
Welcome to my blog and thank you for your comment. Knowing how others react is always useful.

Elizabeth
Wow, that's a really wonderful comment. Grateful thanks to you for it.

Mr Walker
Hi. Good to have you visiting, and many thanks for commenting. Your rmarks are very much appreciated.

Windsmoke
Yes, looking at the future can itself be disturbing, I find.

Gloria
Welcome and sincere thanks for the comment. I shall now fantasize about it being on the big screen whenever I feel the need to boost myself!!

Pamela
Yes, indeed, there are many fine writers. I realise now, that I should (could) have been posting earlier in the month. Always takes me a while to catch up! Thanks for your comments.

SweetTalkinGuy
Welcome to you and thanks for the generous comment.