An Evening at the Theatre 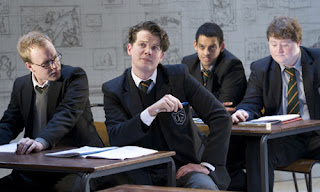 For all sorts of odd and silly reasons it had been a long time - far too long - since Doreen and I last had an evening at the theatre. As much as anything then, this post is in celebration of the fact that a few evenings back we broke the mould and went to see Alan Bennett's The History Boys. According to the progamme notes, the play had been "quietly maturing" in Alan Bennett's mind for 60 years. The seeds were sown when an ambitious headmaster persuaded him and seven of his peers to apply for Cambridge. You may know the play well. It has been around for six or seven years now and has been made into a film. I did not. What higher praise can I give it than to say it is up to Alan Bennett's best.

The staff of Bennett's imagined school consist of a Headmaster and three other members of the teaching staff, each one with a philosophy and outlook wildly different from any of the others. Most of the arguments that I have heard in the staff rooms I have known through the years found echoes, if only dim ones, somewhere in the play. The headmaster sees passing exams and getting a place at university - especially Oxford or Cambridge - as the primary, if not sole, purpose of education. His one motivation seems to be a desire for the school to move even further up the league tables. Against which, there is an English master called Hector who believes that exams and educational strategies aimed at passing exams are a complete waste if time. Hector believes in the value of knowledge for its own sake, but has an unpleasant sexual side to his personality, which Bennett draws out in the play whilst cleverly keeping the audience on Hector's side. I saw parallels with The Prime of Miss Jean Brodie in this and in much else.Hector comes to a sticky end, as does a homosexual boy, whose closeness to Hector finally gives the headmaster the excuse he needs to get rid of Hector. The boys, too, are distinctly and differently drawn and the interplay is both fascinating and amusing. At times hilarious, as for much of Hector's time with them they are engaged in enactments of classic weepies, such as Brief Encounter One moment that I really en joyed and seemed to typify the play occurred after Hector and a temporary teacher had agreed to share. Hector is asked by one of the boys who is going to teach them. Does it matter? asks Hector. Yes sir, is the reply, we need to know what sort of pupils we're to be. Shall we be smart for him or studious for you.
Posted by Dave King at 08:30

Sounds like a wonderful evening out - even if a little of a busman's holiday?

I have never taught so know nothing of the politics of schools; however I imagine they are much like any other place of business.

I think Alan Bennett has a fine perception of life and class and the agonies of unspecified dreams. I have read his Untold Stories and Writing Home, which I would recommend if you haven't read them.

I wrote a post a few weeks ago inspired by his observations about household accoutrements (the Politics of Cutlery) which might amuse you.

Gld that you had a nice evening.
Cruise Picture

I shall have to keep an eye open for that play to arrive on Radio or TV. Alan Bennett is the best..

I’m a huge fan of Bennett as you know. I enjoyed this very much when I saw the film – thank God it was filmed – but the works of his that I’m most indebted to are his Talking Heads. When I first sat down to try writing short stories having never written any since school it was these plays that I had in the back of my mind. He never puts a foot wrong.

Date for you and the missus sounds like fun. Hubby and I haven't been out on a date in awhile. Time goes by and getting out together sometimes gets put aside, doesn't it. Glad you two had a good night together.

An excellent play - as is any play by Alan Bennett - hope you enjoyed your evening out.

I saw "History Boys" in dvd, excellent work. Alan Bennet is unique. I have some tapes too with his monologues delivered by actors, Julia Walters etc.

I think I have absorbed some blog-energy also from you in my latest post and rhymes popped up...

So glad you had a nice evening out. I simply must order "History Boys" on Netflix now, as I am intrigued by the premise and not that familiar with Alan Bennett.

Reenactments of old movies at a boys' school? Sounds like great fun. Also, the two distinct styles of teaching you describe (I prefer the latter, of course) interest me.

Thanks for this account and for some excellent recommendations!

glad that you are out for fun.
keep pleasing yourself with some wholesome humors and entertainment.

award for you my friend.. http://fiveloaf.wordpress.com/2011/04/04/creative-blogger-award/

Isabel
Many thanks for this repsonse, which gave a great deal of pleasure. Yes, there was an element of busman's holiday, but I'm far enough from it now to be able to enoy it almost as a layman. I shall look up your post. Thanks again.

Jim
I have to agree with you about the Talking Heads. They are his masterpiece(s), no doubt at all. I think I could listen to them all day and not get tired.

TechnoBabe
Absolutely right. As I said, that was our first outing in quite some time. We've now had three in six days. Strange thing, life!

The Weaver of Grass
The play - and the evening - sizzled. Thanks.

Tommaso
Yes, I have the monologues on DVD as well. Blog en ergy? Moi? I'll be along.

sharplittlepencil
I'm sure you will not be disappointed.

Jingle Poetry
Thanks a lot. Blessings to you also.

fiveloaf
Much thanks will be along.

Thanks for an idea, you sparked at thought from a angle I hadnâ€™t given thoguht to yet. Now lets see if I can do something with it.