you don't have to drink to be drunk, but it helps. 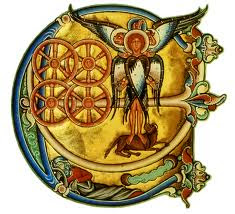 So many things on which you may become a little squiffy:
art, philosophy, religion, sex... oh yes,
and alcohol. There was that time
I buried myself in the pages of the Bible...
I had it to myself for one whole day.
Twelfth Century, its Latin script
and glorious illuminations -
yes, mine to browse
(sort of) for one whole day!
A calf skin-bound Aladdin's Cave
of miniatures and great initials -
The Winchester Edition. Just it and I
together in the library.
Nine hundred pages, forty-eight initials,
each great volume in its glass-topped case,
all locked away. A bell to ring when I
would want a page turned or a painting found.
The Bible got to me. Six masters worked so long on it
their personal developments showed through.

At lunch time, dazed and high on art,
I went for beer and sandwiches.

That evening on the train for Waterloo,
an overflowing folder and a sketchbook crammed
with work, beside me on the floor,
I vomited.
Was sick as the proverbial dog.
Sick as a dog that's swallowed several kittens.
Which is just about the closest I have been to drunk -
except, of course, from all those other causes:
art, philosophy, religion, sex love... 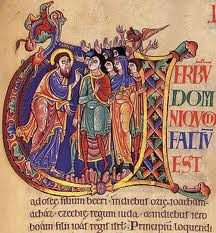 In the final line sex is transmuted to love due to the effects of yesterday -
Valentine's Day.

The upper image is of the vision of the prophet Ezekiel (Ezekiel 1, 1-20). The prophet is seen sleeping at the bottom of the image. To his right is the River Chebar (v.3) It is shown flowing from two jars or pitchers.

The lower image is from Hosea and shows the Prophet preaching.

A possible source of confusion (should you decide to research the subject) lies in the fact that some books have more than one initial. Indeed, the Psalms has four. This is because the Bible shows two versions of the book in adjacent columns.
Posted by Dave King at 06:52

And music. And the sheer joy or words, which must have had a wordsmith like yourself reeling a time or two.

The sheer dedication the early illuminators devoted to their task is amazing. I cannot think of anyone with that amount of perserverance for such little reward in existence now.

Wonderful poem. I think it was something in the sandwich ...

What a glorious way to spend the day - not the evening though!

Overfed on history, art and the bible, Dave- and maybe a little sex along the way. This is a terrific poem. It brought me into the library and squashed me up against your lunch of beer and sandwiches. There are times when you can overdo it, all that information.

Drunk on knowledge? Must have been a heady brew ;^)

More importantly - how bad was the hangover?

Drunk with knowledge,with feelings, laughter, and love! Any transformation is good as long as there are no swaying, slurring and holding on to the lamp post!

Ah yes. I have been drunk on art and writing many a time. Wonderful story of the experience Dave.

So much in this! It started out with that odd "squiffy" word, which I associate with "Blackadder" or maybe the beginning of a limerick, then it went quite serious, and I could read the admiration in your words. Then we went back to pushing the boundaries. It's as if you were too overwhelmed by the experience - couldn't take it all in and had to release some of it - literally.

Loved the lines about the Book and the bell.

Oh, and sex has a way of doing that, doesn't it? Transmuting, I mean.

A real brew of about the best ingredients of life. All in steady measures, except of course when an over generous helping of just one, may upset the balance with all the others!!!!
I trust Valentine's Day was a heady overdose of a few of the above :):)
Eileen

too much of anything can certainly turn the stomach...even things that were normally good...i like the cross out in the last line dave....ha....would be fascinating to look at that bible though...

Hard to know sometimes what makes one vomit. I would, in this case, suspect the sandwich!!

Gorgeous trip from the Biblical age to the today's lunch. I also got drunk, hik!

ah the scriptures are an antique map!

What a great take on intoxication, Dave! Love this.

What a wonderful experience to actually SEE such an ancient holy book.

I adore how you've spanned the centuries here.
From biblical images, to today's lunch, then to timeless sex/love.
I think it was too much mental digesting that finally made you sick!!