Always the baddy of the piece.
the playground terrorist,
a natural stereotype: cast eye,
slight twist to mouth, as big
as any two boys on the block.

He infamously lit the altar
candles in the Parish Church,
then laid them down
against the curtains there,
and watched the fire brigade
arrive to do their work.

Shadow of the evil one
our teacher said - he being
always troublesome in class.
I can't remember what occasioned it -
no doubt he'd thrown his ample
weight around again. She made
him crouch down on the floor
beneath her desk - difficult
for one so copious of flesh - and when
she'd prod him with her foot or taunt
he had to bark. Convincingly,
she said. Dog like - or he'd know what!

Slowly, the taunts took shape
inside my head. They had a point -
a starting point, if nothing else.
His misdemeanours were not it.
His father was a local constable:
that's where the trouble seemed
to lie. She had a problem where
his father was concerned - an issue
with him being what he was. Police!
And Boyo Brannagan, as he was called,
was made to suffer for it. Constantly.
................................................................
This represents #11 in my Suburban Village Series, it was not due to appear until Monday. However, I have brought it forward to link it with our friends at http://www.magpietales.blogspot.co.uk/ who have supplied the following image. 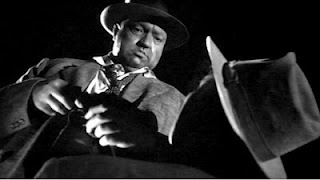 ugh....sounds like a power trip all the way around....that a teacher would put a kid under a desk and make him bark...she would be crucified today...i would hope...

Oh, this is so vivid. We had a 6'4" bully for a math teacher too. Used to throw the chalk at us and the blackboard eraser (which was wooden on one side) and he would slap us upside our heads too. So scared of him, apart from simple arithmetic, I never learned math at all.
This paints a picture so real, a picture isn't needed Dave.
Wonderful write.

Very enjoyable, Dave, the scapegoat if ever there was one ! . So making the bad kid crouch under the desk originated in England, eh ? . They exported it here , too. !

Poor lad! Sadly experience has shown that some teachers did exploit their power. It wasn’t just the children of polcemen either, fellow teachers’ offspring (mine) seemed to come in for a lot of stick too! This is powerful stuff Dave.

Things were so different then...I remember nasty abuse like this.

I really like the way this sounds: beneath her desk - difficult for one so copious of flesh..

Some teachers (and some parents) have a lot to answer for (as I am sure you know Dave as, like me, you were a teacher.)

I think a lot of people would be surprised to know the truth behind the scenes that explain different peoples motivations, good one.

Here is a scapegoat if ever I heard of one!
I understand that some children can be disruptive, but surely a teacher should never abuse his/her position by making an example of a child simply because of his parent's career choice?
You've definitely aroused a few emotions here Dave - makes me feel rather annoyed!!

Orson Welles playing the role of that terrible Sheriff Quinlan, I remember that film, "Touch of Evil".
Are people born evil or some circumstances in their lives make them so...?
As a teacher, I felt particularly touched by this Suburban Village memory: a she teacher making a pupil suffer constantly, poor boy.
Times have changed, for the better or for the worse.
Nowadays things have turned to the opposite extreme and teachers are the ones suffering from the attitude of both their naughty pupils and their permissive parents. The victims of the past have become the tyrants of the present and today's parents are taking revenge of their cruel teachers in their children's educators, that's life!
Virtue lies in the middle term, between excess and deficiency.
Extremes are never good.
People usually find someone to blame for their mistakes or sins: parents, teachers, friends..., but Cain and Abel's parents were the same and one was evil and the other was good.
I think we humans have an angel and a devil inside and we can decide freely which one wins, not blaming others for our behaviour.

This poem is a sad tale and so vividly describes the process of being bullied, Dave. Imagine being labeled 'shadow of the evil one' by your classroom teacher! I am guessing this child fared no better at home under the constant control of his father. Thank you for sharing this eye opening write.

beautiful discription of the scene,like your poem Mr Dave.

It is sometimes painful to know the truth, and the shadow of it is more scary.

Brian
I'm sure she would be, yes. The only worry would be the power of the bully to prevent his vicims and potential victims from telling.

Daydreamertoo
Thanks. Yes, throwing the blackboard eraser was common during my early school days. Such things didn't die out until was half way through Grammar School.

Kutamun
Wow, I wonder just how extensive the practice was. I only came upon it the once - from one teacher, that is. Thanks for saying. Good to have you calling, and your observations are very welcome. Interesting.

Little Nell
Hi, Good to have you visiting.
And yes, I think you're right in this. From my experience most vulnerable were the children of teachers, policemen and clergy.

Tess
Yes, I agree. They were different - and even more different during the war when most of the regular teachers were away in the forces. I'm sure schools employed whoever they could get.

The Weaver of Grass
Absolutely agree. I've heard it said "If we could have the parents in school, we wouldn't need the children." Not entirely true, of course. It always was only SOME parents, but a grain of truth there.

rch
Absolutely. Once you start investigating, you don't know what you will turn up. Thanks for this, a very valid observation.

Ygraine
I suppose my prime emotion is horror, which is what I felt at the time and has sort of hung on all these years. Had I comeacross itduring my professional years, I should have felt very differently about it and - I hope - acted professionally.

Dulcina
This, too, is a very valid observation, I think. I guess it's the swing of the pendulum - Oh dear, does that mean that when it swings back we shall revert to the bad old days? I hope not. The problem is how to steady it in your middle way. Thanks, an absorbing response.

Linda
I think you're probably right, though I don't know - or don't remember - anything about his home beyond his father's occupation. It certainly is the case, though, that the abuser often started out as the abused.

sunny
Thank you very much. Much appreciated.

That was a very vivid poem with a very realistic images. I had to suffer bullying teachers, too, when I was in school.

Ah, there are good police (constables) and bad ones who are on some kind of power trip. There are good teachers and teachers on a power trip as well. I wonder what kind of problem this teacher had with the constable......hmmmmm; makes me think the two might be somewhat the same perhaps? That the constable had occasion to use his power over the teacher? Thus the kind of revenge. Just speculating here, of course.