...and then there was form. 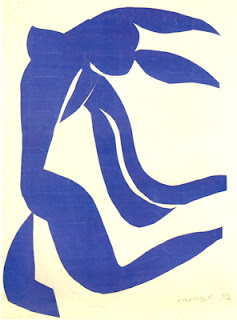 The image is a paper cut-out by Matisse entitled Blue Nude with Flowing Hair
Posted by Dave King at 11:05

..it was like you're writing about a passionate performer of art but in a rather theoretical approach... i think in some ways i could agree to you about the connection of force to forms... it's really interesting to note how this poem of yours circled under science table but end its way to that religious-like feel... wonderful read...smiles...

Excellent poem. Yes, strength and how the dance of life ...

I wonder whether scissors or a skilful scalpel created these flowing lines? Wish I'd been the force behind either!

Wonderful poem.. It builds and builds, like a creation story, and ends energetically with the wonderful dance of life!

Skillfully written Dave - true art from the mind and pen.

It would be a wonderful thing if we all retained this energy, this zest for life and love conquered all.

Force and forms,a lethal combination. More so with the beautiful art form which is most enticing! Wonderful flow in your verse,and a sensuous dance routine. Great take,Dave!

That form looks very much like a dancing hare to me Dave - beautiful.

I am amazed at what can create from prompts and the things that inspire you. Another stunner Dave!

i think i am more force than form...smiles...def an interesting approach to the creative...i agree with kelvin on the science and religeon tones in this...really cool write dave...

This poem reminds me of the force of creation itself.
It moves and weaves it's way through the mind like a rhythmic dance of life...is neither form nor thought...but a skilful combination of both!

What a great tone and rhythm. Such a natural and gentle solemnity.

I also imagine how the creation was done, invisible energy which changed into some form. And I thought that originally dancing was dedicated to Gods in Japan.

A fine piece of ekphrasis here, Dave. Matisse and you in concert!

Kelvin
Thanks so much for a fascinating comment. I particularly enjoyed your brilliant final observation:-
interesting to note how this poem of yours circled under science table but end its way to that religious-like feel.

Leovi
Much appreciate this. Thanks.

Jinksy
Scissors. Definitely scissors. He was the original scissor man!

hyperCRYPTICal
Thank you so much and, yes, I agree... if only we could plug into this zest somehow!

Hank
Thanks Hank. The image suggested the flow, of course. I never cease to be amazed at the flow he achieved with such a simple act as snipping paper shapes!

The Weaver of Grass
I think I see it! Well spotted, indeed!

Carl
Thanks Carl. Alway good to have your reaction.

Brian
I'm not sure what I am vis-à-vis form and force. I don't seem to have a lot of either these days.

Ygraine
A really munificent response, which is very much valued. Thank you for it.

Tommaso
Thank you. I really appreciate this.

Dick
Thanks. You couldn't have said anything more pleasing.

More than wonderful. I feel reading this how I feel when looking at the Matisse. You put it in words, harder I feel.
I would love to know what inspired you to write it.