Digging up the (ice-bound) Now 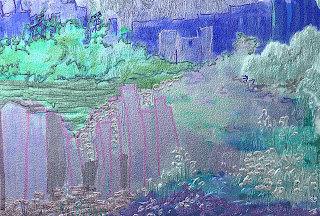 Beneath the melting permafrost,
beneath the detritus of three millennia,
beneath the blown volcanic ash
(compacted now, and granite hard),
beneath deep chalk and limestone beds,
the ruins of the ancient town,
and as we worked we stumbled on
"Cathedral Cave", the ice still hard,
the trees, cadavers, skeletons
and giant fungi sheathed in ice
as though in plaster, waiting for
the sculptor who would come to cast
them for posterity. Most strange of all,
the long lost stones: Stonehenge itself
(the cross stones long since fallen):
not seen by man in several cycles of the ice,
believed by some to have the power
to offer man his lost humanity.

We started work at once to free the stones,
to chip away the ice, but it seemed welded on
and able to renew itself. In desperation
we tried with fire, but only cracked a monolith -
and still the ice refused to budge.
The magic powers we'd heard so much about
seemed anti-man, not pro-humanity.
Then came the old man out of nowhere,
a simpleton, who seemed to have the key.
He's mumbo-jumboed over one stone now
for the past month - and partly thawed the ice.
Maybe He is "The Way"...


By some mismanagement I didn't see this wonder picture by Jinksy until the week was up (yesterday).  No matter, it was so brilliant that I could not let it pass. So with aplogies to her for its lateness, here is what would have been my contribution to her  prompt.
Posted by Dave King at 09:23

The painting was alive before, but more so now. Loved it.

That's an astonishing in-the-future-archeological fantasy you created there, and it feels so right for the things in that image. Who cares if it was a bit late! Worth every minute of waiting! Thank you.♥

The poem tells a take of the picture perfectly.

Better late than not at all - well worth waiting for:-)

A very nice recount of a wonderful find. Perhaps some things are just expected to be left there, bound in endless time.

Rather eerie and fantastical - evokes the picture very well and leaves a trace in the mind...

This time dear Dave, I have posted BEFORE reading a poem in your blog, one of my poems in mine which I feel can "converse" with this.
Actually both look for something within, and behind and beyond what man can or can't do.

Could this be the twin of Stonehenge carved in ice by the Pagan's? :-).

This is one of those strange moments for me. I just finished posting for this week's In Tandem. It is an excerpt from a novel I am writing.I used Jinksy's digital sketch of a young man. It is hauntingly similar or resonant of your piece here Dave. Rather sent shivers up my spine when I read this. I'd be interested in hearing what you think. And yes, I see the monoliths in last week's painting now that you have shared your vision. Really good story.

...ah, the artwork was really wonderful so as your words here.. i must say you did give justice to it.. cheers!(:

120 Socks
I sure agree with the first part. Thanks for saying.

Jinksy
So glad you liked it. I took one look at your picture and the words would not stop coming. Truly.

Carl
Thanks for the confirmation. The image takes the credit, though, I think.

jabblog
Much appreciate the thought. Thanks.

Eileen
Yes, indeed, I think that maybe so. A thought-provoking thought! Much thanks for it.

HyperCRYPTICal
Thanks so much for the comment. Really good to have.

Jenny
I think I know what you mean - I just hope it's the same trace that the picture left in my mind.

Tommaso
Thanks for the response. Shall be along to see.

Other Mary
Of course! - Seriously though, the comment is much valued. Thank you.

Windsmoke
Ah, I wonder... What a thought!

Ann
Oooer! I shall certainly be along to see. Sound like another example of the web's sychronicity!

WINDOWLAD
Thanks for that. Top praise indeed!