The Creation of Man : William Blake 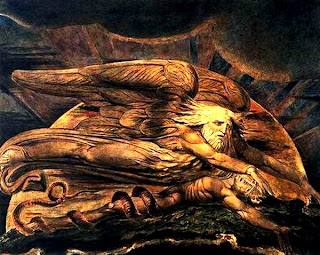 And after Michelangelo
what other hand, what other eye
could bring the scene to life again,
add something to the turning point
of God creating man? Only the mystic
inner eye, the eye of Blake envisioning
how Energy brought Adam from the dust.

Winged Energy, a spent force - almost - here
beneath a golden setting sun as Earth
returns to darkness from its glory days,
scrabbles on bare hands and knees
to fashion man as best He can.
He has no instant button at his beck and call,
no key to press marked "Add Life Now!",
man does not sizzle into being at his finger's touch.

Five days God's laboured on His master plan,
framed time, eternity, earth, universe and life,
framed all that is, except for this, now on the sixth,
from what is left - the last dregs of an earthly dust -
he's making man. The evidence is clear:
God struggles, fully stretched, with this his final
task, most draining of them all. Man, still not
fully formed, still part of earth - and worse,
already in the serpent's coils, the battle all but lost.

The spirit Energy has found the clay
he needs to form the brain. Retrieving it
while opening the skull, He seems distracted,
looks elsewhere - perhaps for inspiration, or perhaps
from sheer exhaustion. Here Blake's strange Elohim creates -
I'd say, almost against the grain - in torment and in pain.

Blake was implacably opposed
to science, all its forms and revelations,
and this was way before "The Origin of Species" -
but Blake is almost there, and that despite himself.

A painted print, but paint obliterates the print.
Blake, too, has toiled to bring The First Man
from his earthly womb to life: man made,
not simply in God's image, but by God Himself
who crafted him by hand - no short cuts taken here!

And no short cuts taken in this poem - a stunning read.

Like the way you've inserted snippets from The Tyger in here. Clever. And works.

120 Socks
Thanks, that comment appeals to me. Glad you liked it.

Jim
I'm grateful to you for commenting on this aspect. I did toy with quoting - or mis-quoting - the next line also, but then thought better of it, deciding that this was enough.

Blake - a real genius Dave - and one so under-rated these days. As usual you have made a good stab at the poem.

Dave..this is really a stunner! and only Jim has the knowledge to realise how you have woven Blake into King! thankyou!

Blake held sway on the poetic scene only later. You did well to highlight some of his works, Dave!

Never any short cuts in your work - it's always beautifully crafted.

A brilliant take on how the creation account inspires artists of all genres and this poem is superb. As I was reading the word "erudite" popped into my head. I look forward to reading your "creations" David.

spirits are always good to one's energy and creative writing.

Wonderful digging into that print and into the psyche of Blake.

Very enjoyable take on the creation of man :-).

The Weaver of Grass
I absolutely agree: Blake has been unfashionable for far too long. I suppose it is because there is no one like him. He is absolutely unique.

Gerry
Woven Blake into King... if only I could! Thanks for a lovely comment.

kaykuala
Mmm, I doubt he's ever held the sort of sway he deserves, but you are correct in what you say. He is a great hero of mine.

jabblog
Much thanks for those kind words.

Victoria
Erudite, though greatly appreciated, might be overdoing it just a tad, think you? A great big, hearty thanks for thinking of it, though!

Morning
My thanks - and every blessing to you. Good to have you commenting.

Karen
Much appreciated comment. Good to hear that you liked it.

Adrian
Wow! And thanks!