Egypt in the Cotswolds - or where I was last week. 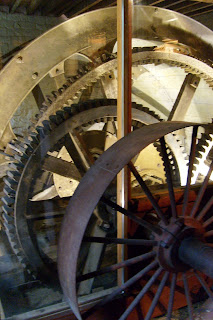 No poem for today - methinks I hear long sighs of deep relief! - but never one to make idle threats, I thought it time I kept mine to blog on where I was last week.
We (Doreen and I) went away for five days with two friends (Bill and Judith) to Nailsworth. We stayed at the Egypt Mill Hotel, which I thought at the time a strange name and had visions of this quintessential English mill on the River Frome exporting textiles - or something - to Egypt! You will not be surprised to learn that it was nothing like that.

In 1675 a Richard Webb bought the site on which there had been a corn mill for a century or more, but which at that time consisted of two fulling mills, a gig mill, dye house, rack close and forty acres of land. The original mill survives as part of the present main building. Some of the meadows have been converted into fish ponds.

We stayed in The Mill House, just a few yards from the mill which now houses the restaurant and bar, kitchens, reception, lounge, some bedrooms and facilities for conferences and weddings etc. Mill House is said to be a classic example of the Cotswold eight gable house, being square in plan and having two gables at each end.

Mr Webb, it seems was something of a tyrant and the mill soon became known locally as The House of Bondage, he being cast in the role of Pharaoh as a result of his treatment of his "slaves". This is the explanation of it becoming known as Egypt Mill.

In 1890 the mill was sold with two waterwheels generating twenty horsepower and it again became a corn mill.

The main wheel and associated machinery are visible, mainly behind glass, in the bar, though some of the machinery extends into the bar - which I show in my photograph. The smaller wheel is in the restaurant. 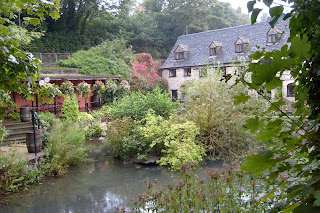 Sounds like an interesting and restful spot. I anticipate milled words any time soon.

It's lovey to read your prose. Dave. As lovely as it is to read your poetry and especially on such an interesting topic as the path of history as you encountered it in your recent travels. The photos are stunning, too.

I wonder why the very word 'mill' brings romantic, other worldly pictures to mind? Matches your photo exactly...

This looks blissful Dave - I hope the weather was to match.

Interesting to read the history of Egypt Mill. Sounds like a nice getaway!

Sounds like a wonderful place for a visit Dave. Thanks you for sharing the history.

Seems so quaint and lovely now and all the misery of its history is lost. I wonder if others are curious enough to learn the story of the name?

Really interesting, particularly the origin of the name. And looks like a lovely place for a break - now.

I always to wanted to visit there..and dint have a chance yet:-( yes its a very interesting and beautiful place..Well portrayed Dave

The photos are educational but the history so enlightening. It's good to delve into the history of a place we visit, more meaningful in a way. Looks a fun place to go. Where is it anyway?
Thanks for sharing, Dave!

When I was sixteen I spent the day in Burton-on-the-Water and some other towns in the Cotswolds. Forget the name of the Mill, I was entranced by the name "Nailsworth" for a town. I live in Nailsworth, 5k from Hammertown. But I fell in love with the architecture. That stone and all the bridges in Burton-OTW. And the walled yards, every one of them seeming to be a Secret Garden just beyond my reach.

The history (My uncle learned the history of anyplace we went) and the bottom picture flooded my mind with memories. Thank you.

PS
I love that first picture as well.the composition of it, the colors...

I should visit this Egypt Mill Dave. The Cotswolds with, in particular the area around Charlbury and Woodstockcl, is where I have spent some holidays in these latest ten years, recently last August. Together, and also somehow in contrast with some places in West Ireland, it where I would like to live.
Marvellous photograph.

what a lovely restful place it looks . well done!

Bonza history lesson, it does look like a very tranquil place to rest up for a weekend :-).

It looks really nice. I love old mills. he really must have been a bastard to have given his name to the mill in that way !

Hi Mr king,this place really looks great.I really like to go to these type of places,it really gives us a healthy atmosphere.so keep enjoying:)
and keep visiting my blog.because your comments gave me energy and method how to write,especially my parents were very happy by your comments.thanks alot.

What a beautiful place to stay. It's always interesting to see old machinery conserved in such a way.

Isabel
Milled or chaff, I guess!

Elisabeth
Yes, the mill was rather a fascinating place, if you're in to that sort of thing. Thanks for the comment.

Jinksy
Thanks Jinks. Yes, the word does call forth romantic allusions, but also visions of those "dark, satanic mills". Both were appropriate here.

The Weaver of Grass
Thanks Weaver. The weather was so-so. I was beginning to think we should have chosen this week, but now I think it would have been too hot! (When I took the picture of the water gardens, it was pouring with rain!)

Mary
It was indeed.

Carl
Thanks for the comment. I sure enjoyed the break.

Tabor
Good question. There didn't seem to be a lot of interest being taken.

Titus
Yes, very much so - on both counts.

Mishi
Shame you didn't get the opportunity. I suppose there are so many fantastic places in the world, we can only see a fraction - even the luckiest of us.

kaykuala
Lota of fun, yes. It's a few miles south of Stroud, in Gloucestershire.


Jeanette
Thanks for a most interesting response - as absorbing as a post! Much appreciated.

Tommaso
All great areas to live. Hope it works out for you.

Gerry
Thanks Gerry. Yes, right in one!

Windsmoke
Glad you liked the history. Not everyone would, I think.

Jenny
Ye, it seems he was - and some!

sunny
Much thanks for the comment. Shall indeed, be along.

jabblog
It certainly does appeal to me. Thanks for commenting.