My thanks to Magpie Tales for the picture-prompt. 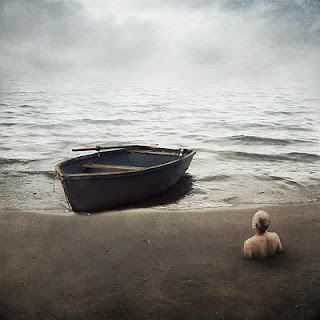 On navigation charts of any sea
or ocean, you will find, an arm's length down
from where you always thought it ought to be,
the unmarked Isle of Katchmeeiffukhan.

It is a tiny island made of sand.
Just that. No rocks or other minerals.
No vegetation, no inhabitants -
No inhabitants, that is, but some strange,
elusive, annelida lady worms.

These humanoids, possessing bodies in
appearance much like ours (but twice the length
and less than half the girth), live deep beneath
the sands, from whence they pop up into view

whenever movement from above alerts
them to an interloper on their sands
or in the waves. Unwary visitors,
grabbed by the ankles and dragged down, may find
themselves in plights at which we can but guess.

Not one has ever made it back to tell.
An empty rowing boat or other craft
bears witness now and then that they were here -
but of the annelida lady worms'
existence, no firm proof has yet been found.
Posted by Dave King at 05:34

So it's not the sand that drags you down, then? Clever take on the prompt - and I loved the Isle of Katchmeeiffukhan.

A whimsical and original take on this image, Dave. I liked it very much.

that is more than just a bit freaky...perhaps a fresh take on sirens

Wow- I enjoyed your unique take on this, although I'll never look at sand the same way.

The most original I have seen this week!

Oh, that was good - and I loved the name of the island.

Fascinating, but kind of creepy, Dave! A unique take on the picture.

Reminds me of "Watch out for the undertoe, Duncan." from The World According to Garp.

That darned old 'under toad' will get you every time ... your Magpie is enchanting. (I'm a Garp fan too.)

Being grabbed by the ankles - that phrase so rich with childhood terror creates a rich scene.

More than clowns, I have always
feared female monsters, 50 foot
women, lady vampires, succubus,
hydra--and now I have to add
the annelida lady worms to the
mix of horror; thanks.

Hey good one Dave, those worms could be lurking in NY also as I could swear I have felt that dreadful pull on my ankles every now and then.

Wow!
This reminds me of a recurring nightmare I used to have as a child.
It really captured my imagination.
Brilliant :)

this is great dave - it really pulled me in and held my attention
then left me wanting more - a gripper ;)

Reminds of a scene from the movie Lara Croft: The Cradle Of Life where deformed creatures who inhabit the underground pull unsuspecting people through the rock walls and floors :-).

Imaginative and Interesting. I really like poem - it kinda leaves me craving for a story.

This is brilliant, Dave!

Amazing! What an imagination. I just smiled all the way through the reading, wondering how you ever imagined such a story...one that draws the reader along wanting to know more. I wonder too if your readers added more details to extend it. Good Magpie!

You have a tremendous imagination.
The worms are recognized as ladies?And they will grow up into some different form like butterflies?

Worming ladies! Is there something near enough! Great write Dave!

Nicholas
Hi, good to have you commenting. Thank you for your kind words.

Berowne
Welcome and many thanks for the compliments.

Laurie
Wow, I'd be very sad to think I'd spoiled the beach for you. Do hope not!

jane
Two great comments. Thanks for them.

anthonynorth
Much appreciate you saying so. Thanks.

Kass
You have me there, I'm afraid, but I'll take it as a compliment, so thanks.

Helen
Not sure if I've got or been got, but thanks for the response!

Tumblewords
Yes, you're right, it does strike from childhood, doesn't it? It hadn't occurred, but now you've released shed loads of memories.

Glenn
Hi, a warm welcome to you and thanks for your comment. I think we (men) have all had those fears, and, yes, they were the driving force behind the post - I'm pretty sure!

rch
Yeah, I guess they could be at that. No reason to think none have ever strayed from the island.

Ygraine
Wow, well, thank you masses for that! It sort of suggests that I'm locked in to something fundamental in the human psyche! (Or that's what I shall try to tell myself.)

Arron
Hi, and welcome to the blog. Good to have you commenting. I very much appreciate your generous appraisal.

Windsmoke
Lara Croft, I know, but not the scene you describe. Thanks for making the comparison, though!

b. b. stoic
Hi Really good to have your company. Thank you for your kind response. It is very much appreciated.

Ash
Hi, and welcome. Thank you for your visit and generous comment. Good to have you aboard.

Ann
This is a comment to die for, methinks! Thank you so much for it. I am very appreciative.

haricot
Now who has the imagination? That's a brilliant scenario. Thank you for your response.

kaykuala
How near do you want? Thanks for the comment.

Eerie and funny, and I like that you give a naturalist's account of the island, almost like a report (but there's also something sly and confiding about the tone too - and you get the sense that the speaker wants you to go and investigate this perilous island yourself).

HKatz
Oh, I do like your comments, so much - especially the last one. Spot on! and thanks.

Your worm women make me think of a cross between the creatures of Dune and sirens. I like the whimsy of this. Cheers.

This was a lot of fun, and this image did not inspire a whole lot of "fun" responses... Truly original take on the prompt. Well done!

ejoyed your words....nicely done and thanks for sharing