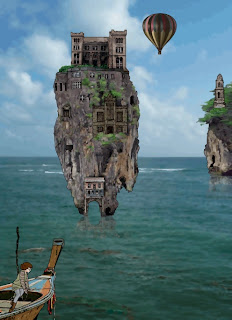 Submitted to dVersePoets Poetics : Out the sketc boook


Trembly as rocker arms
were the formerly rock solid rock dwellers,
the Rockabillies of Rockall, when
their rock-bound, rock-hewn homes
took off, rocketing skywards,
past a small boy fishing for rock salmon.
Fuelled by their heavy rock oil deposits,
their rock caves and rococo palaces,
together with the rocks containing them,
had suddenly grown lighter than air.

With their own heads lighter than Brighton rock,
they leaped now from their rocking chairs
and rocked 'n' rolled
to avoid hitting rock bottom.
Out, round their rock gardens they rolled,
out among the rock plants and rock tripe,
(not to mention the rock roses),
joined by a few rock rabbits
and even the odd rock-borer,
together with flights of rock pigeons.

They well knew that it wasn't rocket science
or even rock mechanics
that would rocket them back to earth,
for in the stables the rocking horses
that would tow them back rock-by-rock
(with the help of a few rock lobsters)
were already champing in their rock shafts
when for good omen a roc flew by.
Posted by Dave King at 08:17

This is an amusing poem, Dave, which reminds me of Swift's flying city of Laputa in "Gulliver's Travels". I like your punning use of rock and roc, with all their compounds.

first..would love to hear you read this...and my..you put a lot into these verse..love all the word plays.....you rock david ;=) and this is rock-solid writing for sure..the mention of brighton rock brought a small tear to my eyes and for a moment wished me back..smiles

To steal a title from Thomas Pynchon, this rock aria shows a spectra of gravity's rainbow: Rock to rock, dust to dust. - Brendan

I will read this poem when my heart would be as heavy as a rock,
then I could fly as far as I can.

rock on dace, ha, that was a delight to read, it also tickled the imagination bone as well thinking of the rocks losing their gravity...cool stuff man...

David,
This was a pleasure to read. You had a very imaginative take on the prompt. Great vocabulary and pace, rhythm to it all. I enjoyed it.

There is much humour in your literal interpretation of the picture - and very bold of you to use the repeated 'rock' throughout.

a rocking piece on rocks and rocking life.

human confidence and intelligence are important to prevail any obstacles.

This is a very impressive piece.
keep it up.

Dave, this was a bit different than your usual style. I usually don't find myself smiling after reading your work; but after I read this one, I laughed aloud. A rocking-good read!

This is awesome! You made me smile and feel light -- lighter than rocks floating in air!

Smiling all the way through this one--really fun, and really excellent use of language, with a bit of a Lewis Carrol nonsense rhyme feel to it. Love that last line, where you just surpassed yourself. ;_)

such imagination- wonderful to read!

I was going to say Rock On Dave but others have beat me to it.
Rock on anyway...... The word verification is supar - like you poem!

A sheer delight reading this poem Dave. I danced with it. I will tell my students to read it, it's poetry rocking round the clock.

are you sure all these 'rock' somethings exist? if so, you must have spent quite some time unearthing them.

Fabulously inventive-- you let yourself play and play-- always a good thing-- so much music and such a deft tongue you have! xxxj

This was a really rockin' poem! K.

this poem ROCKS :) and its rocky to understand...

Nicholas V
Hi, Good to have you with us. Many thanks for the kind words.

Claudia
I do believe you'd only want to hear me the once - I don't have a great voice for such. Thank you so much for all the positives.

The Unknowngnome
Shall surely try!

Brendan
I like it, I like it very much! Thanks for it. And a warm welcome to you.

haricot
I thought this was going to be sad, but the flying cheers me.

Brian
A most encouraging comment. Thanks a lot for it.

kaykuala
Well, that's it, once you start to rock...

Steve
Hi Steve! A warm welcome to you. And many thanks for the great response.

Kerry
Good to have you along, Kerry. Mmmm, I did take a deep breath before plunging in to all those rocks. Thanks for confiding your thoughts.

Morning
A really interesting reflection. Thanks for it.

Mary
Oh, that pleases me so much. Sincere thanks.

Louise
Hi Louise and a very warm welcome to you. Good to have you visiting. Thank you for your very generous comments. Much appreciated.

Mama Zen
Thank you. Good to know your thoughts on it.

Rohit
Good to have your comments. Thank you for them.

hedgewitch
Hi! Really good to have you along and to have your thoughts on the post. M uch thanks for them.

zongrik
I shall surely hope to! Thanks for sharing, and thanks for visiting. You are most welcome.

Kathe W
Really good to have you with us Kathe. Thanks for making the trip and for sharing your thoughts.

Cait
Rock on will do nicely, thank you. Great to have your comment - always.

Tommaso
I shall think with delight of you and students rocking! Thanks a lot. M uch appreciated comment.

Windsmoke
Really good to know you think so. Thanks.

Old Kitty
That is most gracious of you. I do thank you!

Friko
Yup, I think you'll find them all in any of the main dictionaries. I checked two such. Two of the somethings were in one (each), the others were all in both. There are actually a lot more that I didn't use!

Rachel
Thanks. Really good to know you enjoyed it.

jen
Hi and a warm welcome. Good to have you along. Thank you forr your kind words.

manicddaily
Thank you very much for this. I really do appreciate it.

Muhammad
Some words may have fallen on stony ground, you mean?

fabulous and I'm with so many others when I say, "rock on!"