The truth about dad and Sam 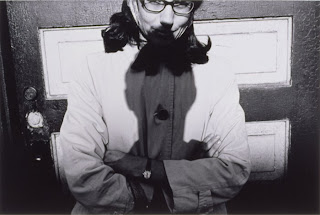 That's it, the one, the famous one, the photograph.
That's dad, of course, though looking more like mum.
It set the fashion for while, had everyone cross-dressing.
Became for dad life-changing when he took it up for real.
Joe Public saw the figure as some sort of cross
between a spy and a cross-dresser - and not far wrong, at that!
A stunt it was to start with. To advertise his book:
Spies, Moles and Sexual Peccadilloes.

Good title that, I thought, had every one a-flutter, wondering
and wanting just a bit more info than the book would give.
He went too far. Over-cooked it for the photograph. The wig,
the long, dark curls... did not sit well with the rough beard!
The there's the shadow of the man about to rape
or murder him or her - or so Joe Public liked to think!
And as for that great hole in him... don't ask. A camera lens!
Supposed to be a secret camera. The fashion then - for spies.

He took her on his tours to publicise the book
and waited for the world to come,
to beat a pathway to her door -
which soon enough, they did -
especially security, the counter-everything brigade.
The photograph's iconic now,
worth a pauper's ransom, shouldn't wonder!
Pivotal it was in their divorce.

The image is this week's prompt on the Magpie Tales blog.
Posted by Dave King at 06:00

I'm glad you saw a beard too.

It was a confusing photo - when I first saw it, I thought the figure had a massive nosebleed. I think the responses this time have been very intriguing and original. Yours is excellent - very true to the cold war feeling in the image too.

That has to be a tale to beat all tall tales...Top class!

Incidentally, I like the way you have structured your site, it is super and very easy to follow. I have bookmarked you and will be back regularly. Thank you
karachi online shopping

That was great! Very entertaining. I was smiling the whole way through. Especially at that last line. That made me laugh out loud!

ha. nice unique take on the prompt dave...and edging on risque as well which always grips the attention...

I especially like all the naughty Sam puns at the end.

You made me smile.

Very clever treatment Dave! You've given a clever twist to the picture prompt which initially got many stumped.

One of your best Magpies Dave ... you went to a place few would venture!

Love where this picture took you. Quite a tale!

wow- what a ride this is!

Brilliant, Dave!
This one really had me in stitches.
It should be turned into a blockbuster movie!!

Tee hee! Wonderful. You have a brilliant (and "twisted") mind. Just what the photo needed. Thank you.

I agree with all the others. A great read, and resonating with the cultural fears of the cold-war period.

That is fun to tell a story about a photo. It sounds real, though it is surreal.

Ah, well, the things people will do for fame and fortune! :-)
Excellent amusing take on this week's rather pedestrian image. I'm glad you have jazzed it up with sex lies and video tapes!
Have a great Christmas, Dave!

Hmmm...feel like I'm missing something. I have read and reread the poem, tell myself I made different parts work on various levels with a few different metaphors, but still... Intriguing, kind of like a spy code in itself. Won't you tell us more?

I smiled at your last two lines re "pauper's ransom being pivotal in their divorce" ;-)

And I enjoyed your poem below on the Leonardo painting...such a contrast to the one above. Keeps life interesting.

all
Much thanks for all your support, and every blessing to one and all, and to yours for the festive season.

Isabel
Thanks Isabel. I basically agree with all you've said.

Pvt
Thanks for the compliment.

April
Good to have you visiting - and really good to know you liked it. Thanks for saying.

Kass
I am really pleased to hear that you liked all the naughty Sam puns at the end. Thanks for saying.

kaykuala
Thanks as always for your supportive comments. glad you liked it.

Helen
That's a real plus for me, your comment. Thanks for it.

Mary
Good to hear. Thanks for telling.

Kathe W
Wonderful to hear that you thought so. Thank you.

Ygraine
Wow (again!) That's some comment. Thanks very much for it.

Windsmoke
Yes, exatly what the image put me in mnd of.

ds
i rather like that combination - thanks for it!

Christine
Thanks. That's great to hear - exactly what I'd hoped for!

haricot
Like it - real and surreal. Magic realism, perhaps

Nicholas V
Thanks for that. Like the sex, lies and video-tape!

Ann
Thanks for that Ann. I would, gladly tell you more, but I can't think what else there might be. Maybe you are looking for something deeper that is not actually there. It was just a bit of fun. It is good to hear that you enjoyed the Leonardo, though. Difficult to go wrong with him, perhaps! Thanks again, your comments are much appreciated. Keep 'em coming!

I liked this very much - it made me smile - and think - and smile again:-)

Merry Christmas to you and yours and a Healthy and Happy 2012.

jabblog
Much thanks for that - Smile= good!
All the Blessings of the Season to you and yours.