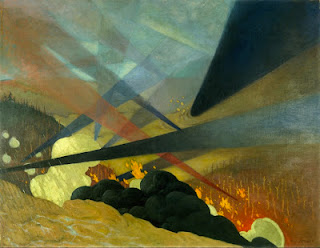 Verdun, an ancient fortress town strategically placed on the road to Paris. It has a long history of siege and conflict. During W.W.II it became a symbol of French resistance when it survived a long and terrible assault from vastly superior german troops. The painting by Felix Vallotton was contributed as this week's prompt by Magpie Tales
Posted by Dave King at 09:30

some really great lines dave....speak
the death of speech,
the death of sapiens....is where you first caught me....though i do like the angular play against the antural in the beginning too...if only it ever stop....i hear that...smiles.

I think in this poem you are giving voice to a town that had a difficult role, and what darkness it has indeed seen.

This is great, Dave... love the internal rhyming...

Excellent poem. War is undoubtedly the worst side of humanity.

Your voice rings out loud .. clear .. we need to listen. This is one of my favorite 'Dave poems' ever!!!

Your poem could be read in a lesson on war writing and in particular war poetry.

War has no winners, as you have so clearly stated here. Such a powerful poem. Thank you.

May the great onslaught end someday...

your words arre stunning, Dave , you have cut to the metaphysical heart of warfare. ww1 was the first display of overwhelming technology, used destructively, ww2 brought the concept of total war. ww3 has been underway since the end of the cold war, a cold, machine like state of constant warfare , the conclusion of which shall dtermine , as you say , wether we get to keep the SAPIEN . OUR souls are on the line this time. cheers mate .

"there will be nothing left for light to show - except the most impenetrable darkness man has ever seen."
This is probably the most powerful line I have ever read.
It provokes a feeling of horror at the capability of man to bring about the destruction of all life - even of the planet itself.
Disturbing, yet profoundly moving.
I will remember these words forever.

This poem is fitting memorial to the the Armistice and the horror that was Verdun. There are many powerful images and stanzas, but the last two are specially effective, with a kind of grim beauty to them that stays with the reader. Very fine poem.
SK

Brian
Many thanks for so many kind observations. They do mean a great deal.

Mary
Yes, Verdun suffered greatly, but it seems not to have had the recognition of some battle grounds.

Laurie
Thanks. Much appreciated.

Leovi
Yes, by a long way, I think.

Helen
Good of you to say this. I shall certainly take it to heart. Thanks.

Tommaso
A mighty fine compliment indeed. Grateful thanks for saying so.

The Elephants Child
this is certainly true. Thank you for your thoughts -- and the much valued compliment.

Beautiful, poignant write, Dave...very much in the style of Edward Thomas...

War is hell that is fur sure.....a powerful write Dave!