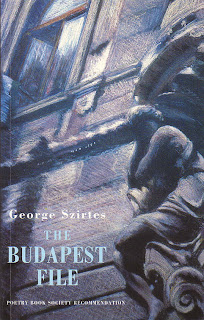 Do you have a pile of books beside your chair that you are currently reading or to which you are just now referring for some reason ? Like the pile beside your bed, only in my case for a wider variety of purposes and therefore larger and forever spilling out of the pile to the occasional annoyance of my best beloved? Among the assorted tomes there is always one, more often two, whose purpose is ensure that I do not for too long allow any author to languish forgotten on the shelves. That particular little scheme does not work to my complete satisfaction, but it is modestly successful. At the moment the pile consists of Birdsong on the Seabed, China's Classic Anthology of T'ang and Sung Dynasty Verse (You know about both of those), Jorie Graham's Sea Change, Kathleen Raine's Collected Poems, The Oxford Book of English Verse, George Szirtes The Budapest File and The Hugh Macdiarmid Anthology. This is a smaller collection than normal as a result of a recent spillage and the consequent clear-up operation.

It was whilst refreshing my association with The Budapest File that I thought it might be worth while to post on it again. (The doubt suggested by that word might is occasioned only by the fear that I might not - will not - be able to do it justice.) And whilst I am on the subject, some of you may have realised that I did post on George Szirtes (and sort of on this book)about a year ago. here I felt then, and feel more strongly now, that I did not do either him or the book full justice. Hence this, in part, recycled post.

You may know that George Szirtes was born in Hungary and that his early childhood was spent there, that he came to England as a refugee and that during the eighties he began to write about the city, from his memories of it, and of its history. The blurb on the rear of my copy proclaims that: The Budapest File is like no other book. Certainly, it is like no other book that I have ever read. We have all read - probably too much - of the world's recent tragic history, of man's inhumanity to man, of loss and destruction, vanished hopes and criminal stupidity, but to be able to convey those things in such a way that they come home to us and become part of whatever it is that constitutes our soul, is an extraordinarily rare gift. How much more extraordinary must it be then, to be able to convey that desolation in words of great beauty. The poems in this book are tragic, desolate - and hauntingly beautiful. Beyond which, I do not intend to say much more, but to leave you with a few snatches of that beauty. Please be aware, though, that the beauty - and, indeed, the gravity - of these verses is in large measure cumulative. It will not all come through from these extracts.

The second verse of Undersongs


The empire underground: the tunnelling
Begins. The earth gives up her worms and shards,
Old coins, components, ordnance, bones and glass,
Nails, muscle, hair, flesh, shrivelled bits of string,
Shoe leather, buttons, jewels, instruments
And out of these come voices, words,
stenches and scents,
And finally desire, pulled like a tooth.
It's that or constancy that leads us down
To find a history that feels like truth.
The windows cannot speak because we pass
Before them all too often but the bricks know
What they stand on. There is no town below,

It's only bits and pieces as above.


Desire again, the Undersongs. The lost
Children feel it in their sleep,
and turn uneasily to the wall through which
Symbols pass and cool their blood like ghosts.
My mother's family has passed through it,
No one remains, and she is half way through.
Her brother disappears, the glove has closed
About him somewhere and dropped him in the ditch
Among the rest. The ditch becomes a pit,
The pit a symbol, the symbol a desire,
And this desire's the thread. The tunnels creep
Under the skin, the trains with their crew
O passengers can glide through unopposed.


This from part 5 of The Courtyards


Think of an empty room with broken chairs,
a woman praying, someone looking out
and listening for someone else’s shout
of vigilance; then think of a white face
covered with white powder, bright as glass,
intently looking up the blinding stairs.

Think of a bottle lobbing through the air
describing a tight arc – one curious puff –
then someone running but not fast enough.
There’s always someone to consider, one
you have not thought of, one who lies alone
or hangs, debagged, in one more public square.


From The Photographer in Winter


Your camera is waiting in its case.
What seems and is has never been less certain -
The room is fine, but there beyond the curtain
The world can alter shape. You watch and listen.
The mirror in the corner seems to glisten
With the image of a crystalline white face


As I said above, these snatches convey but a pale flavour. Context changes things. Poems in the collection to which they belong often blossom beyond themselves and mean more than when read in isolation. That is certainly true of the poems in this book.

Earth continues to heat up
while delegates talk on
and cool towards each other.

How generous of you to appreciate and promote Szirtes. Those are very moving poems. "Desire - pulled like a tooth" - this is just great. The form, the simplicity that reaches deep... If these are snatches, you have whetted my appetite. Haiku #18 is pointed and telling. Very nice post.

That "Courtyard" section sent shivers down my spine. Then your haiku caused a laugh. Do you ever get my comments? My email provider always says they are fatally flawed, or whatever the terminology is for undeliverable.

Dave,
Thanks for the references. I have Wallace Stevens Wallace right now, oh my oh my, I can't put it down.

I'll look up your other favorites.
Keep up the Haiku,
Dianne

Wonderful haiku. You've been on a prolific of late. Poignant poems fit for a rainy day which we are having.

I always have several books by the nightstand. And I couldn't live without them.

I am not a sophisticated reader and cannot read poems that are so harsh or realistic. I like poems that are musical in nature and about the kinder side of mankind.

But, like you, I have piles of books by the bed.

Thank you for taking the trouble to reintroduce him to us. I missed it first time around a year ago when I did not know our blog.

Thanks. I really enjoyed 'The Courtyards' and 'The Photographer in Winter' selections. And your Haiku too!

Hi Dave, Thanks for visiting my blog. I hope you come back... I'm not much of a reader these days (too busy DOING--ha)--but I do love reading your Kaiku. Years ago I studied the kaiku.

I also get the fatally flawed email about my comments like Enchanted Oak does. Maybe it's some setting on your blog, Dave. But it doesn't bother me. It just goes along with my own assessment of my expressions sometimes.

I'm afraid that the books next to my mind are resolutely accountancy based. I have eschewed anything more interesting for a live of unremitting numeracy. I envy you.

LOts to read/catch up. I'm still trying to leave a message here. I hope this sticks.

Reading your post today makes me want to go get a haircut (Hungarian hairdresser....will chat)

Enchanted Oak
I agree: it is shivery. I do get emails. Have replied to the latest, but there does seem still to be a problem - though it's only with a few corresponders - I believe - not all.

Dianne
Thanks for those kind words.

Ronda
I'm not sure for how long I can keep the run going, but thanks for the encouragement.

David
I'm not sure there's a talent involved, but thanks.

Tabor
Fortunately, there is a poetry for all. Thanks for the comment.

Elisabeth
It's his command of English, so quickly acquired that amazes me.

Betsy
Welcome to my blog an d thanks for stopping by to comment. Shall do.

Madame DeFarge
An area that is a closed book to me, I'm afraid, though my son is more inclined to your persuasion. I hope it pays you adequate reward. (Though it's not too late to start, of coujrse!)

Lakeviewer
Do you mean in the comments or an email?

Rachel
Ha! You had me worried there for a moment!

Yes indeed, you have captured the moment magnificently in Haiku #18 The meaning is clear at all levels where the imagery leads me.

This is so fantastic !! Thanks friend !!

Haiku#18
is so aptly true

makes one a little sad.
I wonder how we can shake people out of their collective madness.
I, for one, would be quite happy to get by with a great deal less than I do.

Paterika
Welcome and many thanks for the encouraging comment.

ewix
And welcome to you.
I agree, I think perhaps the majority would be willing to sacrifice if they were assured it would do some good. The basic problem, I think, is a lack of trust - or is it faith?

Trish and Rob MacGregor
Welcome to you both and much thanks for commenting.

human troubles always take more time and attention than worthwhile affairs.
its all a part of being human. :P