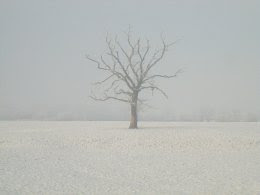 Faith is hanging on
to what you once believed:
ever colder - global warming!
Posted by Dave King at 09:33

Wrenbury village must be at the North Pole! That's a dreadfully cold shot! Your haiku is rather bleak too, but telling.

wonderful combination. the image and the Haiku go together perfectly.

It's cold here in Toronto too, but that's expected in January. The photo is stark but very beautiful.

Cold, cold and more cold. I am so ready for spring and winter has not even begun its stay.

the weather was always a brute. faith hanging on to what you once believed...
admirable.

Hi Dave and Happy New Year to you!

I've been catching up with your posts: enjoying the haiku, particularly No.2.; the New Year traditions; your rather sad portrayal on an aspect of aging.

We still have a white world but fortunately not as bleak as the one in your photo today!

I look forward to more of your thought provoking writing in 2010.

wish I could understand how we can blame global warming for this amazing cold spell, which I believe is set to go on for weeks. Glad you are keeping up the haiku - very good discipline Dave. BTW - I am still getting a daily message to say that my comments are not getting through to you.

Dave,
I've received my comments back from your blog, undeliverable! What's up?

Oooh, the shot made me shiver and the poem made me smile.

Strong, clear words in this haiku, global warming and warning.
And I enjoyed "last lines" too, in which I recognignized a "painful" attitude, something very difficult to express in poetry, and it's really remarkable how you deal with difficult subjects like that...the deadly power of too much thinking...a difficult and "classic" subject, started by Shakespeare in Hamlet maybe and more and more embodying the texture of the present...and by all means "fear", like in Hamlet, is the kernel of it all. So different from the sparkling neatness of the haiku world!

As Nessa says in my favorite British series, Gavin and Stacey, "Tidy. I feels it."

Dear Dave, very nice post! HAPPY NEW YEAR for you and your family!

Your creativity and warmth light my day!

ha! don't let this one get out!

good one, and timely, for the writing and for the reader and for the corporate biased politician.

Phew, Global what? I've never seen so much snow in Manchester before, and if that's the Wrenbury village in Cheshire, I didn't recognise it, Nicola's parents live there, and we went on New Year's Eve.

Much to think about in the first thought: Faith is hanging on to what you once believed.

Rinkly Rimes
I think it's in Wiltshire, but I agrre it's bleak.

Barry
We have 10 inches of snow this morn ing - that is defin itely not expected any time of the year.

Raj
Funny, my childhood memories include none of awful weather!

Derrick
Thanks for the response - and for the effort of catching up! This moening it's pretty bleak here! It's not even pretty any more.

Weaver
I've seen it blamed, but never an explan ation of how!

Janet
And again, thanks.

lakeviewer
Incredible - it's happened 2 or 3 times now. Apologies, but I shall have words!

David
Me? Or the weather?

Conda
Smiling through the shivers? You almost sound British!

Tommaso
Thanks for that... and, yes, it's a valid comparison you draw with your final sentence.

Kass
I confess i've never watched G and S, but I feels the phrase.

Lady in Red
Thank you and a happy new year to you and yours.

Diane
Many thanks for those remarks. Much appreciated.

Andy
Small world - we should be able to get our heads around it! Thanks.

Charles
Welcome to my blog! Thanks. That's what I thought - then I looked out of the window!

loved the image and the haiku.... nicely done; it is quite effective... I could feel the shivering begin with the combination of word and image

lol. the photo is a beauty.

well a predicted effect of climaet change is the loss of the gulf stream which would mean colder winters for the Uk and other parts of Europe. The cold winters in some part of the USA are likely more down to the increased likelihood of extreme weather which is another consequence of global warming. Certainly the sceptics are wrong to say it all disproves global warming...