Birdsong on the Seabed 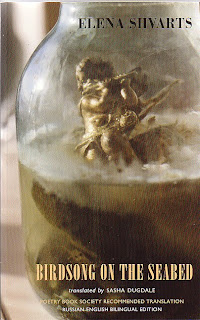 Everybody knows not to judge a book by its cover, but what about by its title? I've never done it before, and it's highly probable that I'll never do it again, but I must confess that I put this book on my wish list knowing nothing about it but its title. I reasoned - in that strange way of mine - that anyone who could come up with a title like Birdsong on the Seabed had to be a poet of the first order. I am, of course, aware of the faults in that particular piece of non-logic, but fortune favours the brave or maybe he who hesitates is lost or even fools rush in where angels fear to tread. Something like that, anyway. Faint heart perhaps, for I did then do a bit of research (after putting it on my wish list) to discover that the title was in fact that of the title poem to Elena Shvarts's first collection. Since when there have been other collections whose poems have been graced with titles no less alluring: Solo on a White-Hot Trumpet, for example. The Circulation of Time in the Body being another. And what about: Memory's Sideways Glance?

There is a reason for these titles - well, there had to be, didn't there? They are not just eye-catchers. Shvarts is a visionary. Her titles are what her poems are, and often what they are is ecstatic. I see parallels in her work with that of William Blake, perhaps the main difference being that in hers the ecstasy predominates. Sasha Dugdale, the translator puts it this way in her useful and insightful introduction: In many of her poems the lyrical persona is in the grip of a spiritual vision: the writing is tense, racing, elliptical and maintains the super-observant detachment of the fevered mind. That will no doubt commend it to some, and just as surely deter others. Let me give an example, lest I encourage and deter the wrong ones!


Better to shed all flesh
And enter the dandelion
And with a simple breath
Be scattered far and wide.


Shvarts is a myth-maker extraordinaire. Religious myths, though the religion has more to do with poetic faiths than with organised or established ones. Another aspect in which she is, to my mind, very Blake-like.

We see this clearly in a poem like The Circulation of Time in the Body. It is a short poem, but typical of Shvarts being most extremely her true self. Here is the final verse.


And her forehead is a garden before dawn -
Look - dawn is breaking, the sun must rise.
But the back of her head is purple evening
And midnight is crawling up her spine.


Perhaps the main point which Dugdale seeks to establish is that Shvarts is a St Petersburg poet. The importance of this fact is that it refers to far more than the accident which is the geography of one's birth and childhood. The reference is really to the fact that Shvarts is steeped in the history, the traditions and the myths of St Petersburg. A granite city established by Peter the Great, it is, Dugdale points out, a symbol for man's uneasy relationship with natural forces. Primarily there is the River Neva forever threatening to flood and to overwhelm the city. Shvarts uses it to represent violence, even death. Then there are the marshes insisting down the years on their right to a regular supply of victims. For Shvarts, Dugdale points out, the river represents the struggle of order against chaos, light against darkness, reason against madness, civilisation against sheer brutishness. And in this she is representing nothing new to the world. She is following in the footsteps of those giants of St Petersburg: Pushkin, Gogol, Mandelstam, Akhmatova, Dostoyevsky and others.

What Shvarts does wonderfully well is exemplified in the title poem: she conveys an ecstatic vision of the poet's true calling. I was going to write that it is a very un-English vision, but realised that I meant a very un-Western one, so I am resigned to the fact that it may not appeal to all - though my wish would be that this particular snippet of birdsong manages to break out of the narrow confines that poetry sometimes gets itself into. It deserves to have a very wide appeal indeed.Birdsong on the Seabed is an image of a poet-bird singing of the wonders of the land above to the dull witted and cold-blooded life of the seabed. They, however, do not wish to know. Like many others in the book it is a miraculous, almost fairytale poem:

Whirlpools softly spinning,
Oh, give in to the sea,
To the moon, the water, the grief
Circling, I am falling
To the algae-blanketed seam
The muffled war-like ring
Of bells draped in weed.

Bird slides under the waves
Bends them by force of its wings.


The poem's final four lines ask the question that every poet, every artist, must ask at sometime, even though he only ask himself:


Is it worth singing where no one can hear
Unrolling trills on the bed?
I am waiting for you, I lean from the boat -
Bird, ascend to the depths.


A foot of snow
people panic buying.
Where now the Dunkirk spirit?

Wow. This is a rich post. I hope that my signing in allows me to leave a comment.

seeing the new broadcasts, i don't blame them...

I'm always nervous about poetry in translation... and yet there's no way my Russian would be up to reading poetry (I'm just about at the "where is the post office?" level ;) )

Also... Dunkirk spirit alive & well in our area. You can't panic-buy when you can't get to the shops :p

I struggle enough when it comes to Western verse. You might be interested that I have a post in draft on the whole subject of titles. Just notes for now so don't hold your breath.

This is a beautiful post, Dave. I love the depth of the poetry you quote here and wonder how much is 'lost in translation'.

A great deal I fear, but at least we get to glimpse some of it here.

More power to the translator and to the poet in the first place and to you Dave for loving the title sight unseen and introducing the poetry to us here.

Thanks for the review, Dave. This was a gamble that certainly paid off for you--and for us!

I know that death is important for poetry, but I like better the poetry of life.

Thank you for this post. I didn't know Elene Shivart, but now i'm going to look for her work in the bookstore. Beautiful, hauntingly (sorry my mothertongue is dutch, i hope this is correct) poems. Too bad i cannot read Russian.
I agree; the title is sublime.

Excellent review--you make a strong case for putting this poet on my reading list!

dave i really enjoyed this post. first because you said something that most bibliophiles would admit to when pressed which is that we are often seduced into buying a book because of its title or even its cover. second because of the poetry. that is fine insightful strong writing!!!! third because i love to learn about writers who i haven't heard of or read before. so thankyou all 'round for this! steven

Thanks Dave for this review which definitely makes me want to explore this poet. There is something which I recognise as a Russian quality even though I have only read Russian poetry in translation.
I like the way your haiku are developing too. This one in particular takes some time to follow as it leads out into its meanings. Hope to see more of these topical haiku.

There's certainly something of the much-vaunted mighty Russian soul in the stirring excerpts you've included. Thanks for the intro, Dave. I shall investigate further.

My second Haiku - This in honor of your book reviews that adds to my ever increasing pile of books!

PS keep the suggestions coming. I'll get caught up one day.

Always good to be introduced to new poets, new works.

lakeviewer
Hope you're not still having trouble! I seem to be getting the scripts. Blogger returns them for why, I don't know!

Rachel
I understand the point you make. I always treat poems in translation as new works written in English. If they don't work in that way, I move on. Thinking about it, though, so much of our litersry heritage began life with us in translation - not least, the Authorised Version of the Bible.

It's only the delivery people who can't get to them round here!

Jim
I am interested, yes indeed. I shall be patient, though.

Elisabeth
I think that is generally true, though perhaps less so in this case. The English and the Russian originals face each other across the double page, as the fashion n ow is - which I neglected to mention in the post. I think the ideal is probab ly to have a recording of the poet reading in the original and to be following it from an English translation - though my aging brain has more and more difficulty these days with parallel processing.

Karen
A gut feeling, I suppose.

Tabor
The one is part of the other - no? In poetry as in life.

Momo Luna
Your English is infinitely better than my Dutch. Glad you got something from the post.

steven
Thanks steven. Yes, I just saw the tite and decided to order it off the web!

Lucas
Thanks for that. I have managed a daily haiku for longer than I had expected when starting out. Thanks for your other comments. Much appreciated.

Carl
There are a few more to come - I had a very good Christmas, bookwise!

Dick
Thanks for that Dick.

Jeanne
My thoughts exactly. Thanks for that.

We can be seduced by book titles but I'd never be brave enough to buy such a one without knowing a little more about the contents. Being someone who lives on the surface, I'm not sure I could appreciate the depths of this work.

Derrick
I surprised myself - but you are too modest, too modest by half!

Dave I seriously think poets are on a different dimension.

I would have looked at the title and went what. See you are clever.

I'd buy it for the title alone too, good review, thanks I'll look out for it...

Renee
Welcome and thanks. I'm perverse. I just got excited.

Crafty Green Poet
You'll not be disappointed, I'm sure.

Very often I can't get to the end of pieces of poetry analysis, instead I really enjoyed this and the quotes and also the haiku at the end that is in harmony with them.

Tommaso
Thanks for that very encouraging response.

Where now indeed? I would say, buried under the snow. :-)

A Cuban in London
Thanks once again.