Our first art was engraving of a sort.
Deep underground, in caves as dark as sin
we chiselled walls with beasts we craved as kin:
brothers in nature, maybe, soul and thought.
We conjured those we hunted, feared or fought,
and in such closeness traced our origins.
All flesh was then as one beneath the skin,
made so in charms the sorcerer had brought.

So what did we bequeath to you and yours?
A rock or two with paint and shallow scores?
Some poor graffiti buried in the stones?
A scattering of shards and a few bones?

But what a surge of spirit, mind and soul!
How close we came to simple, strong and whole! 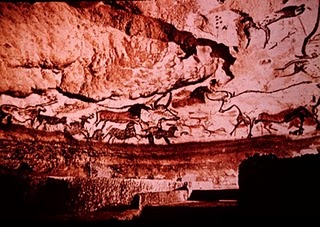 Early man tells of a rite of passage


The shock of it went with us to the grave,
a long crawl down through Mother Earth, limbs raw,
some torn to shreds; thoughts brief, confused; in awe
of phantoms in that dark arena, cave
of altered states (induced, adrenal, brave
or oedipal), its contours stained for boar
and aurochs; childhoods blown away like straw
in ghostly lampsmoke, light and flambeaux, wave
and strobe. Horse notions whinnied through our skulls;
wolf, fox and bear sang anthems in our souls.

Long gone from dyes dabbed on with lichen wads,
they thrive beneath your hemispheres, those gods.
Entrenched in dark, illiterate, mute cells,
they dream old dreams and cast archaic spells.

How far removed we seem from our ancient forebears and yet how similar our perceptions.

The rocks were their Internet. We've just developed faster processors.

You took me not only to a place but the mind of your subject. Spot on.

Excellent stuff. I would love to view cave paintings but probably never will.

Very evocative poems, and for me, timely. I have just finished reading the fourth of Jean M Auel's series of stories about Man of that time and can recommend them with minor hesitation to do with unnecessary repetition. But they do bring Neanderthals and Cro Magnon man alive for the reader and make us aware of the depth of knowledge they must have gathered just to survive!

Bagman and Butler
Good point! I must admit, I'd not thought of it that way before.

Brian
Thanks, yes, point well made - and some graffiti writers are still poets.

Leatherdykeuk
Thanks for that. Again, a association that had not crossed my thought pad.

HyperCRYPTICal
I know exactly how you feel.

Stafford
A warm welcome to you and my thanks for both the visit and the comment. Also for the book recommendation. Does sound interesting!

You definitely have a way of getting into the mind of early man!

A subject I am fascinated by Dave: they are us, utterly us. Technology is the separator, not genes. Loved your tight musings.

Bang on Dave, loved them both!!